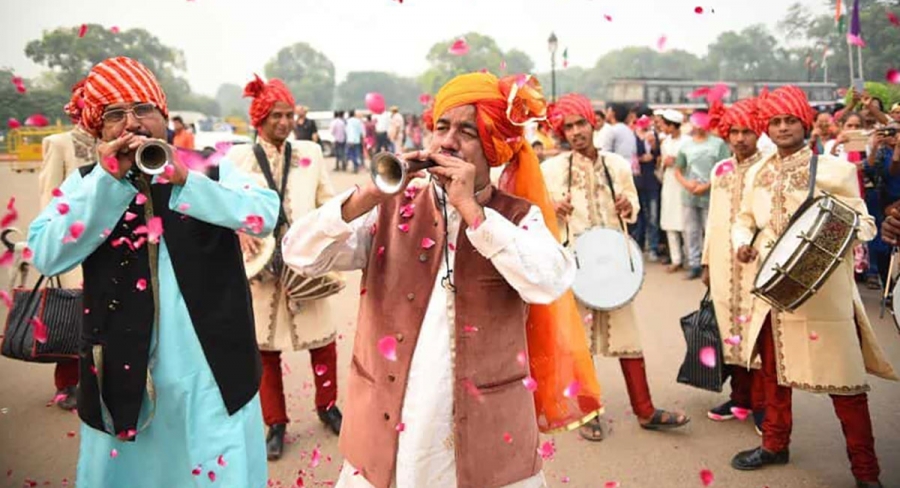 When Syed Fariddudin Qutbi, the “khadim” [attendant] of the shrine of 13th century sufi saint Qutbuddin Bakhtiar Kaki in Meharauli, stepped out after offering a floral “chhatra” [a flower-embellished umbrella] at the ancient Yogmaya temple located a stone’s throw from the dargah, all he had to say was that in the small temple sanctum sanctorum suffused with a strong incense and jasmine fragrance, he felt the same tranquillity and a “magnificent, invisible power” he feels at the dargah.

Part of the annual cultural festival “Phool Walon Ki Sair” [Festival of Flower Sellers], an initiative that promotes communal harmony and positive cultural exchanges since the early 1800s, many like Qutbi go beyond the bounds of religious identity, and encourage members of other communities to offer flowers and “pankhas” [fans] at places of worship that are considered not “their own”.

The roots of the festival go back to the reign of one of the last Mughal emperors and Bahadur Shah Zafar’s father, Akbar Shah II, who was buried next to the dargah. Legend has it that when his son Mirza Jahangir was imprisoned on the orders of the British, Akbar Shah’s wife vowed that she would offer a blanket at the sufi saint’s dargah upon his release. As fate had it, Shah’s son was released and the blanket was offered. Upon imperial orders, floral offerings were also made at goddess Yogmaya’s temple, which sparked public enthusiasm, causing it to become an annual tradition.

The festival was stopped in the 1940s when the British started their polarising efforts in line with their “divide-and-rule policy” that led to deep rifts between India’s two major religious communities, said Mirza Mohtaram Bakht, secretary of the Anjuman Sair-e-Gul Faroshan, the organisers of the fair.

He said the festival was revived in 1961-62 by India’s first Prime Minister Jawaharlal Nehru. It has, since then, been a regular occurrence and brings together hundreds of Delhi residents each year, Bakht said.

In today’s deeply polarised milieu where hate crimes against specific communities are just as rampant as the venom spewed against them on social media, the assimilating significance of the week-long festival takes a new turn.

“When our Hindu brothers offer a blanket of flowers at the dargah, members of the Muslim community take a step back and let them take the lead. Similarly, Muslim people are encouraged to offer a floral ‘chhatra’ to Devi Yogmaya. It’s a communion of hearts, and that can only happen if there’s ‘pakeezgi’ in people’s souls,” Qutbi said, adding that he recommends extremists of all religions to at least experience other cultures once.

Rajnish Jindal, another resident of Mehrauli, who has been visiting the festival for 15 years, said that it was a matter of developing comfort with all religions and people from all walks of life.

“You go into a gurdwara, you find peace and comfort, that’s your ‘mahzab’ [faith]; same is with a mosque or a temple or a church. It should be a matter of personal belief,” he said.

Not surprisingly, the path of “Phool Walon Ki Sair”, is often laden with thorns and threats.

“People say ‘tum karke toh dikhao, hum dekhte hai tum kaise karte ho’ [We’ll see how you do it]; not everyone wants a secular nation that celebrates all its religions. It often happens covertly; 11th-hour permissions, indifference and excuses create hurdles for us, even if there is no direct visible opposition.

“We, however, give it back with our enthusiasm. Truth is always victorious. They can’t stop our caravan,” said Bakht, a former geologist and a “proud Delhi-wallah”.

Kite-flying competitions, processions, wrestling bouts, kabbadi and shehnai recitals mark the first four days of the seven-day festival, with offerings in the dargah and the temple earmarked for the fifth and sixth days.

This year, Delhi’s Lieutenant-Governor Anil Baijal offered the floral blanket at the dargah on November 15, and Delhi government’s transport minister Kailash Gahlot offered a floral “chhatra” the next day, along with members of both communities.

“Phool Walon Ki Sair” closed on November 17 with tableaus from over 11 states and a night-long qawwali singing programme.