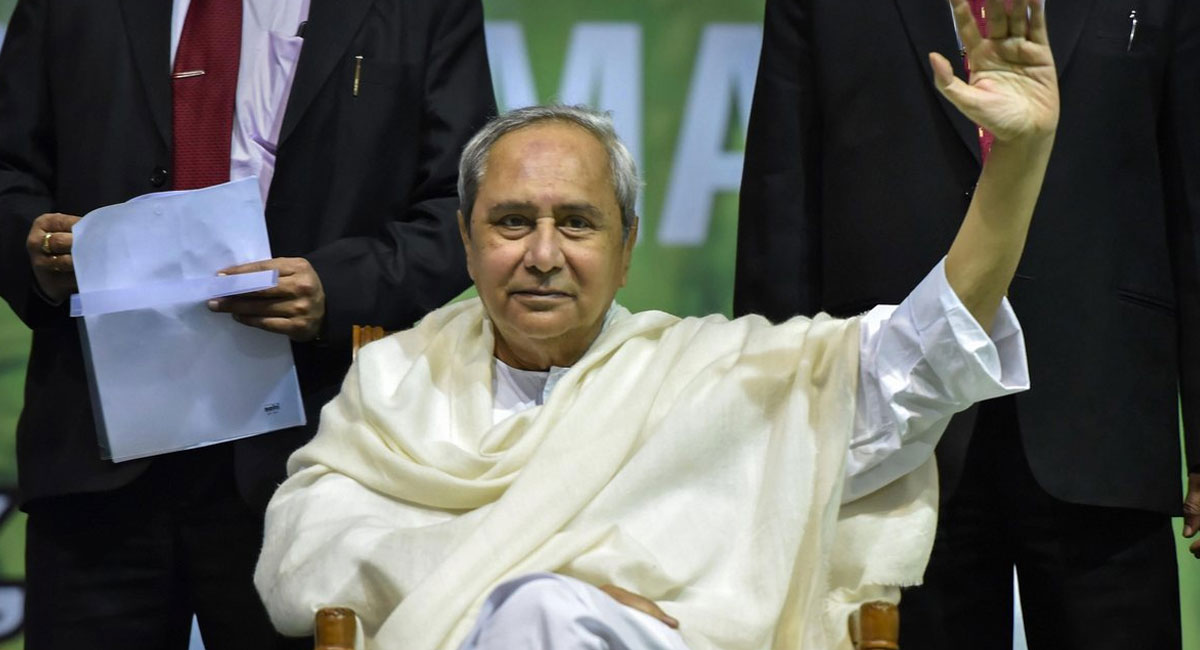 Amid the recent exodus in BJD and sundry cries of opposition challenges, Odisha Chief Minister Naveen Patnaik looks poised to make his party shine in the coming elections

At a time when political parties across the country were busy stitching opportunistic alliances ahead of the coming general and assembly elections in the sole quest for power, one party was most conspicuous for bucking the trend: the Biju Janata Dal.

“We will fight on our own,” stated Odisha Chief Minister and BJD President Naveen Patnaik unequivocally earlier last month, while also making it clear once and for all that winnability would be the only criteria on which his party would select its electoral candidates.

Many political pundits reckon it is this clarity of vision, singularity of purpose and courage of conviction under Naveen’s exemplary leadership that has scripted the BJD’s record-breaking political success over the past two decades.

However, political rivals and critics have challenged this phenomenon time and time again, especially during election time – and this time has been no different either.

In the middle of March, while addressing a rally in the district of Bargarh, Congress president Rahul Gandhi squarely blamed the Naveen Patnaik administration for failing to provide jobs to youth in the state.

“Odisha has become the centre of unemployment because most of its youths are moving away to other states in search of employment,” Gandhi thundered.

Noting that there were 1,50,000 government posts, 30,000 school teacher posts and 5,000 medical staff posts vacant in the state, he promised the state that all vacancies would be filled up if the Congress was brought back to power.

The Congress scion also hurled some serious corruption accusations at the BJD boss.

“Chit fund companies looted Rs 5,000 crore from the people and Naveen Patnaik handed over Rs 50,000 crore to his friends in the mining scam. Let me assure you that we will take action against those who looted public money and provide justice,” Gandhi stated.

He also sought to convince his audience that although Naveen had promised to build cold storages and provide irrigation facilities to the agricultural community in the state, he had failed to keep his word as a result of which farmers of Odisha continued to commit suicide.

Referring to the loan waiver and raising of minimum support prices (MSP) on paddy in neighbouring Chhattisgarh, where the Congress recently wrested power away from the Bharatiya Janata Party in that state’s assembly elections, Gandhi said his party not only made promises but also kept them.

A day earlier, the BJD had found itself on the backfoot when both the BJP and the Congress called for action against Odisha Health Minister Pratap Jena for his alleged remarks that the ruling party would give money to voters.

While addressing a meeting in Salepur town of Cuttack district early last month, the Health Minister allegedly declared that the panchayat and booth from where the highest number of votes come for local BJD candidate Prasant Behera shall receive Rs 35 lakh Rs 15 lakh in cash, respectively.

Addressing a meeting in Salepur area of Cuttack recently, the Health Minister allegedly said the Biju Janata Dal (BJD) would give Rs 35 lakh in cash to the panchayat and Rs 15 lakh to the booth, which would give maximum number of votes to local BJD candidate Prasant Behera.

In virtually no time, both the national parties requested the Election Commission (EC) to debar Jena from fighting elections in Odisha on grounds of his violation of the model code of conduct. After submitting a memorandum to the Chief Electoral Officer (CEO), state BJP vice-president Sameer Mohanty revealed that a request had been made to the CEO for prosecution of Jena under the Indian Penal Code.

Meanwhile, Congress media cell chairman Satya Prakash Nayak told the press that his party had also called on the EC to initiate strict action against the BJD minister and not allow him to contest the polls.

This was only one of the handful of issues that the BJD faced over the past few weeks concerning its members, the predominant one by far being disgruntled party leaders either quitting or joining opposition forces.

The most notable one recently, of course, was former BJD minister and party veteran Damodar Rout. After being expelled from the BJD last year for alleged anti-party activities, Rout finally joined the BJP last month.

On the occasion of Rout’s formal induction on March 14, former BJD MP Baijayant Jay Panda – yet another long-time and key leader of Naveen Patnaik administration who had joined the BJP a few weeks earlier after a bitter and long-drawn-out parting of ways with the BJD – welcomed him into the party fold, saying he was looking forward to working with Rout for Odisha’s revival.

“Rout’s arrival will strengthen the party in Odisha. His decades with Biju uncle (Biju Patnaik) and long years in his cabinet and also his son’s did not help him against harassment when he exposed corruption at highest levels last year,” Panda said.

Majhi quit sensing denial of ticket to him, and went on to join the BJP. And Nayak, in his resignation letter to Naveen, ascribed his decision to a conspiracy hatched against him by the party’s Balasore district chief, saying that “the mental torture” he was subjected to by the district BJD president was becoming increasingly “unbearable”.

The exodus from BJD continued over the course of the next week. Former Paralakhemundi MLA K. Narayan Rao, Kusum Tete from Sundargarh and Kalahandi General Secretary Pramod Patnaik quit after being denied party ticket. Rao joined the BJP just a day after submitting his resignation.

In her resignation letter to the Chief Minister, Singh expressed her displeasure at not being intimated early enough about the party’s decision against giving her a ticket. “I could have been at least informed prior to the announcement of final list of candidates. I was asked to prepare for the upcoming elections. Furthermore, I am irked as to why (MLA) Bikram Arukha would have any say in the matter of my nomination from Kandhamal,” she wrote.

“Furthermore, after my husband Hemendra Chandra Singh’s demise, I have been harassed in Nayagarh by Arun Sahoo (a BJD MLA from Nayagarh) with legal cases multiple times in the last four years. Though I informed this to the party, no action has been taken in this regard,” said Singh, the Daspalla MLA who had expressed interest in contesting from Nayagarh Assembly segment.

“I was denied a ticket because of a wrong decision taken by a group of party leaders. Going by the manner of distribution of tickets, it is now clear that the party is keen on giving an opportunity to corrupt candidates,” said Nayak.

Kalahandi MP Arka Keshari Deo also resigned from the BJD citing similar reasons. After being replaced by Kalahandi MLA Pushpendra Singh Deo in the Kalahandi parliamentary constituency, he had said: “I have laboured tirelessly for the last five years for strengthening BJD. I could have been notified prior to the announcement of the candidate list.”

The exodus of members has not solely been a headache for the BJD; the Congress and the BJP have also faced the same issue.

The BJD also recently welcomed Harischandra Panda, the nephew of BJP state President Basanta Panda. “Uncle (Basanta Panda) is working for the party, not for the area. The BJP leadership is acting like an autocrat. That’s why I am quitting the party”, the junior Panda stated.

Both the BJP and Congress are trying to do everything from the electoral playbook to dethrone the BJD.

In a bid to impress women voters, the Congress recently declared that the party would give priority to women during distribution of tickets.

Soon after Naveen filed his nomination papers for the Hinjili Assembly constituency in his home district of Ganjam, the BJP fielded its vice-president Pitamber Acharya against Mr Patnaik – and the Congress changed its candidate there, replacing Pam Krishna Panda with local man and former district president Sambhunath Panigrahi.

Towards the end of last month, the BJD also alleged that Odisha’s chief electoral officer (CEO) had stopped the implementation of the Krushak Assistance for Livelihood and Income Augmentation (KALIA) scheme, the state government’s version of direct transfer benefit for the agriculture sector, citing Model Code of Conduct, while allowing the implementation of the Centre’s Pradhan Mantri Kisan Samman Nidhi (PM-Kisan) scheme.

Stating that the party would take the matter to the Election Commission, BJD spokesperson Sasmit Patra told the press that the CEO’s decision to stop the KALIAS Yojana funds was “unacceptable”. He argued that if the BJP’s PM-Kisan Yojana, which was a very similar scheme that came much later than KALIA, was being implemented, there was no reason to stop the disbursal of KALIA funds.

As he kicked off his party’s election campaign at a rally in Nayagarh, Naveen himself had to assure the state, that “no one can stop KALIA” and he would personally ensure no eligible farmer was deprived of the scheme’s funds.

The Chief Minister’s speech at the rally also revealed that, apart from ensuring that the BJD would hold its ground firmly against opposition attack in the coming elections, Naveen had the big picture very clearly in his mind.

Such have been his party’s preparations ahead of the elections, along with the prevailing political scenario in the country, that Naveen expressed supreme confidence in the BJD winning all the 21 Lok Sabha seats and having a big say in who forms the government at the Centre this time around.

This situation, the Chief Minister stated, would give him and his party the opportunity to right the wrongs been done to Odisha historically.

Giving a fitting response to his rivals’ barbs at him and his party, Naveen sought to remind the people of his state that the BJP had reneged on its 2014 election promise to accord special status to the state of Odisha despite being in power for five long years at the Centre.

After assuring the people of Odisha that his party would continue to fight for special category status for the state, Naveen continued that train of thought with the railway sector in Odisha.

The Chief Minister expressed regret that although Indian Railways was earning its highest profits, to the tune of Rs 20,000 crore, from Odisha, the Centre was doing nothing to improve the poor railway network in the state. Instead, he pointed out, big chunks of funds from the railways were being spent in other states.

Naveen also sought to focus on the fact that despite earning thousands of crores as revenues from Odisha’s coal sector, the Centre has continued to neglect it.

The Chief Minister also made another point, which was duly noted by many political observers across Odisha as irrefutable. He said BJP leaders were in no position to fight for the rights of the people of Odisha because they were controlled by the party high command in New Delhi.

But the high command of the BJD, Naveen stated, were the people of Odisha themselves.

In response to opposition playing the gender equality card for votes, Naveen sought to remind everyone that a third of the Lok Sabha seats from Odisha were already reserved for women even as he listed many other measures that his government had been taking since being in power for women’s empowerment.

If his party’s results over the past four elections are any indication, the people of Odisha believe in Naveen and his administration. There is little to suggest that will change anytime soon, no matter what the opposition says or does.