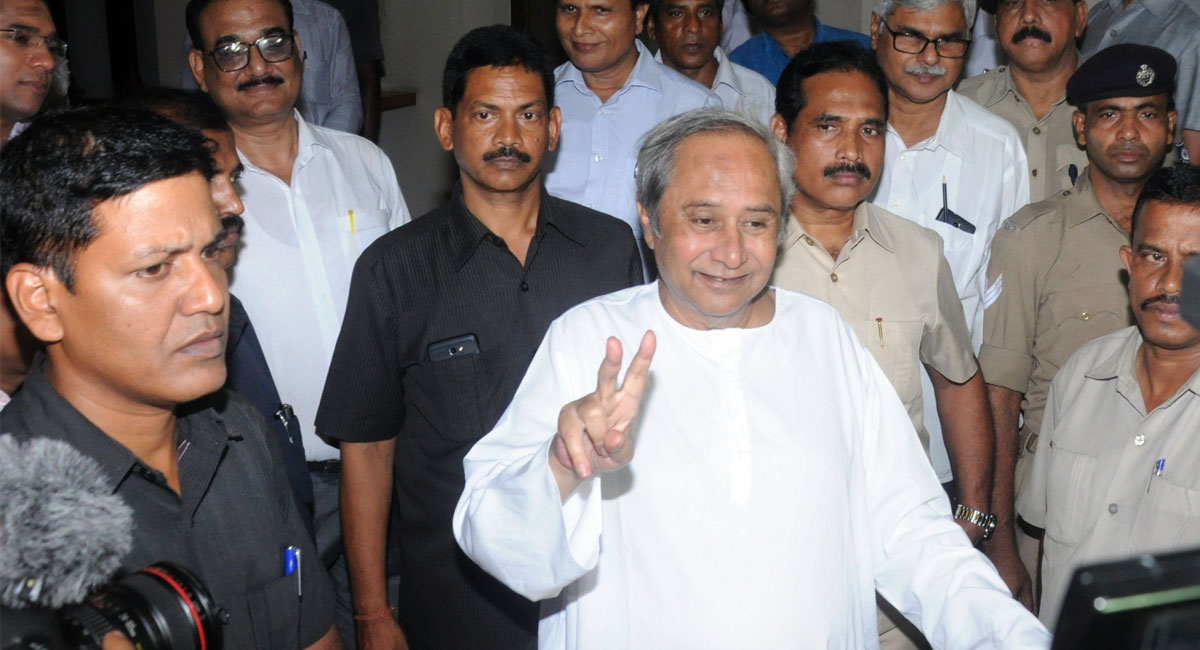 All set to serve out a fifth consecutive chief ministerial term in Odisha despite the Modi wave across the nation, Naveen Patnaik has proven beyond doubt to be the ultimate survivor of Indian politics

A couple of days before the election results were to be declared, some long-time loyals of the Biju Janata Dal in Odisha were a worried lot.

Many national exit polls had showed their favourite party losing ground to the Bharatiya Janata Party in terms of Lok Sabha seats, thus raising the spectre of the trend spilling over to the state assembly seats as well.

Besides, some chest-thumping BJP leaders had begun claiming that a record fifth consecutive chief ministerial term for BJD boss Naveen Patnaik was well-nigh impossible – their overt over-optimism stemming from the hope that the BJP would rake in at least 70 seats in the 147-member state assembly and then easily cobble up the numbers necessary to finally form the government in Odisha.

If only wishes were horses.

And those BJD supporters need not have prematurely sweated either.

By late afternoon of May 23, it was clear as day that there was virtually nothing that could stop the BJD from retaining power in its stronghold. Even the Modi wave that was undeniably sweeping across most of the country by this time had once again broken on a big, immovable rock in the form and shape of Naveen Patnaik and receded without much consequence – almost the same way it had half a decade ago.

After all, the final tally saw the BJD bag a whopping 112 seats out of the 147 seats contested, while the BJP came a very distant second with 23 seats and the once-powerful Congress an embarrassing third with a mere nine.

As far as the BJP and Congress were concerned, the 2019 Odisha election results meant a significant shift since 2014 when the former had won 10 seats and the latter 16. With the current results, while the BJP established itself as the prime opposition party in Odisha, the Congress’ relegation to the political sidelines of Odisha was complete.

As for the BJD, a five-seat dip from 117 seats in 2014 hardly made much of a difference. It was still a comfortable two-third majority that many of the party’s leaders had expressed confidence about achieving earlier.

Unlike those of their political rivals, their confidence was not unfounded and misplaced; it was firmly rooted in a few intricately intertwined facts, realities and strategies.

Over the past decade, the BJD had efficiently implemented many welfare schemes – such as the Re 1 per kilo of rice and Rs 5 per meal schemes – for the poor and underprivileged in Odisha, who still make for a sizeable percentage of the state’s population. Naveen had also launched several schemes over the years under the Mission Shakti programme, which earned him the enduring loyalty of women, who are a massive vote bank considering they make up for nearly half of the state’s population.

Therefore, when he further stepped up his game during the time leading to the 2019 elections  (which a  lot of political experts believed to be in response to the rising BJP challenge in Odisha) on many fronts – whether it was the launch of the Krushak Assistance for Livelihood and Income Augmentation (KALIA) scheme for farmers, or fielding of 33 percent women candidates in his party for the Lok Sabha elections – it all seemed like a natural progression, making critics and the opposition hard-pressed to convince the public that the latest schemes were just an exercise in vote-catching.

Truth be told, it could not possibly have been a vote-grabbing gimmick. Because, it was nearly half a year ago when Naveen had called on Prime Minister Narendra Modi to push for the long-pending Women’s Reservation Bill in the Lok Sabha. He had even followed up on that by writing to fellow chief ministers  of states and union territories seeking their cooperation on the same issue.

Similarly, when Naveen took action against some of his ministers or party members ahead of the elections, it never came across as a damage-control measure meant for the sake of votes. That is because it was in line with his long-standing, zero-tolerance policy against corruption or any kind of impropriety that ill behoved an ideal politician. This was one of the key factors that contributed much towards keeping his personal image clean and anti-incumbency at bay.

The Naveen Patnaik administration’s efforts and achievements that raised the national and international profile of Odisha – whether it be the disaster management programme (most recently in evidence during Cyclone Fani last month) that has been acclaimed by the United Nations and World Bank, or the successful hosting of global sporting and cultural events (the Hockey World Cup and Bhubaneswar Film Festival, to name a few) – were never lost on the people of the state.

Never one to rest on his laurels, Naveen also did well to carefully develop and perfectly execute a few election-specific strategies that held the BJD in good stead once again against the BJP juggernaut fuelled by yet another Modi wave. Most political pundits have noted that none of these strategies were made overnight either.

From quite early on, when political circles across the country had been abuzz with talks of a united opposition or a Third Front to take on the ruling regime, Naveen put in place a policy of equidistance from both the BJP and Congress. He maintained a somewhat pacifist stance towards the saffron party, despite its provocations, and asserted time and again publicly that the prime concern for him and his party was the welfare of Odisha.

Even during the campaigns in the run-up to this year’s elections, when the BJP leadership attacked the BJD government and party left, right and centre, hurling charges of corruption and  maladministration, not to mention passing personal, ageist remarks against the Chief Minister himself, Naveen refused to be drawn into a mudslinging fest that might have played into the saffron party’s hands – just the way it happened in West Bengal, where the Trinamool Congress lost much ground to the BJP thanks in no small part to Mamata Banerjee’s naked aggression against the Centre.

Instead, Naveen played his own game and by his own rules.

Before he began his one-of-kind electoral campaign across the state, a video featuring his morning exercise routine was released, which went viral and then a long way in dispelling the notion propagated by his critics and rivals about his failing health. The video concluded with the Chief Minister saying that he was “getting ready to fight for the people of Odisha”.

The state-centric campaign was high on both style and substance. When it was on, most newspapers circulating in the state carried massive ads featuring Naveen and his party’s accomplishments over the past five years. Naveen’s team also ensured that people across Odisha remained informed about his state-wide campaign in which he reached out to the people of Odisha to remind them of the staggering range of welfare schemes that his government had implemented and assure them of an even better future if given another opportunity. The generally reticent BJD supremo also left no stone unturned to connect with his party workers and keep their morale high during the big battle where they were instructed not to respond in kind to the aggression of BJP campaigns and focus instead on raising awareness about the BJD’s past accomplishments and future commitments to the public.

While all of this combined to help the BJD to yet another astounding victory in the state assembly polls, the party’s tally in terms  of Lok Sabha seats – 12 compared to the 20 won in 2014 vis-à-vis the BJP’s eight compared to just one last time – led some political observers to suggest that the BJP might have snatched some sort of moral victory over the BJD this time.

However, it was widely concluded eventually that the BJP’s  much improved results were a function of the split voting that Odisha witnessed this time as a result of parallelly held Lok Sabha and the state Assembly elections with people deciding to have “Modi at Centre, Naveen in Odisha”.

The pattern of split voting was undeniably evident in Bhubaneswar and Bargarh Lok Sabha constituencies. While no MLA candidate of BJP won from the Assembly constituencies coming under the two Lok Sabha seats, both the parliamentary constituencies voted in favour of the saffron party.

But all that does not quite matter after the stupendous assembly elections victory.

Soon after the result was out, Naveen wasted no time in expressing his appreciation of it.

“I would like to express my deep gratitude to the people of our state, who have showered their blessings time and again,” he said.

Also thanking his party workers and leaders for the thumping victory, Naveen conveyed his special thanks to the women voters for turning out in large numbers and voting in favour of the BJD.

Earlier, Naveen also called up Prime Minister Modi and congratulated him for the victory of the BJP-led NDA in the Lok Sabha elections. He even told the press that the BJD will have a constructive relationship with the Central government for the development of Odisha.

Within the next two days, Naveen’s commitment to send seven women candidates from Odisha to the Lok Sabha was fulfilled, even though two among those candidates came from the BJP.

While the BJP candidates were Aparajita Sarangi from Bhubaneswar and Sangeeta Singhdeo from Bolangir, the BJD will send Pramila Bisoi from Aska, Chandrani Murmu from Keonjhar, Rajashree Mallick from Jagatsinghpur, Sarmistha Sethy from Jajpur and Manjulata Mandal from Bhadrak.

At the age of 25 and 11 months, Murmu is all set to create history by becoming the youngest Lok Sabha member ever. She defeated two-time BJP MP Ananta Nayak by a margin of 67,822 votes.

A few months ago, she was just like any other girl who was searching for a job after completing her B. Tech from Bhubaneswar-based SOA University in 2017 and preparing for competitive exams.

“I was in search of a job after completing my engineering degree. I had never thought that I would enter politics and become an MP. My nomination was unexpected and came out of the blue,” said Chandrani.

She expressed her gratitude to the people of Keonjhar and the BJD chief for giving her the opportunity to serve the people.

Regarding the man himself, as he commenced his fifth straight innings as Chief Minister of Odisha after being widely felicitated during and after the swearing-in ceremony on May 29, Naveen tweeted: It’s a nostalgic and personal journey for me to reminiscence the past 19 years. Today while I take oath of office for the 5th term, I humbly accept the responsibility that comes with the faith my 4.5 crore family members have reposed on me, yet again.”

The truth is, he has never let those 4.5 crore people of Odisha down. And by doing just that, he has become beyond a shred of doubt the ultimate survivor of Indian politics.