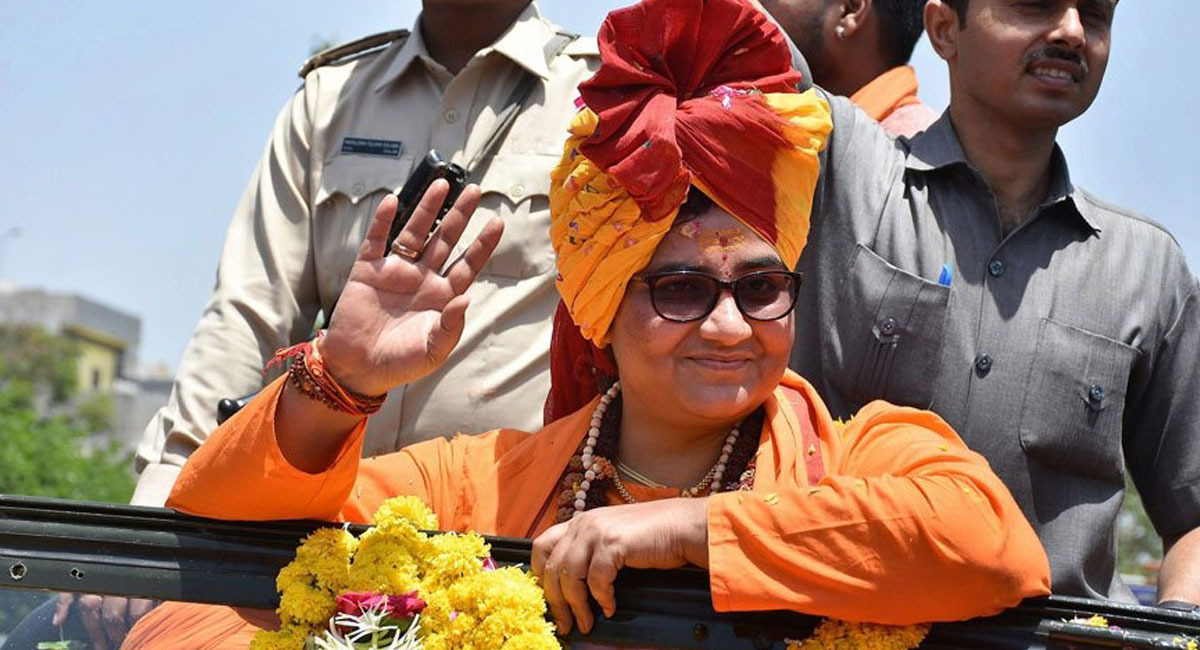 The Bhartiya Janata Party’s (BJP) decision to field Sadhvi Pragya Singh Thakur, a key accused in the 2008 Malegaon blast case who has spent nearly nine years in jail, against Congress leader Digvijaya Singh, the man who reportedly coined the term “Saffron terror”, in Bhopal may be layered with many political considerations but undermines much of what the party stands for.

This is the first time that any political party in India has chosen a person who is out on bail and stands accused of terrorism as a parliamentary candidate.

Political analysts believe Sadhvi Pragya will polarise the Hindu votes besides splitting the Rajput votes in the Bhopal constituency which has nearly 18 lakh voters, including around 4.5 lakh Muslims. Her entry is expected to further polarise an election that is already charged with religious and nationalistic fervour.

Already, her candidature has helped the BJP grab maximum coverage in election season. While her entry and controversial statements have been dominating media discussion, a recent unemployment report went largely ignored.

Often in the news for courting controversies, the 48-year-old Sadhvi was earlier associated with the RSS-linked youth outfit Akhil Bhartiya Vidhyarthi Parishad (ABVP) and the ‘Durga Vahini’, the women’s wing of the Vishwa Hindu Parishad (VHP).

She was arrested in October 2008 after at least seven persons were killed and 80 injured in the blast in Malegaon, a Muslim-dominated power-loom town in Nashik district on September 29, 2008. Among those killed was a five-year-old girl, who was returning home to have Ramzan dinner with her grandmother.

Later the next month, another prime accused Lieutenant Colonel Prasad Shrikant Purohit was arrested in the case. Both were charged with plotting the blasts as part of a pro-Hindu group, Abhinav Bharat.

At the time of her arrest, the Sadhvi was charged for allegedly planning the terror blast and providing a two-wheeler that was used to plant the bomb.

However, this is not the only case against her. She was booked in former RSS pracharak Sunil Joshi murder case but was acquitted by a Dewas court in Madhya Pradesh in February 2017. Joshi was shot dead a few hundred meters from his rented house in Chuna Khadan area of Dewas on December 29, 2007.

According to Indian law, any citizen above 25 years of age is eligible to contest polls unless convicted of any crime, punishment for which could be for two years or more. Sadhvi Pragya is not yet convicted in any case.

The opposition parties and members of the media have sharply criticised BJP’s decision to field Sadhvi Pragya, however, Prime Minister Narendra Modi and party president Amit Shah have both come to her defence.

Modi said that fielding her was a symbolic answer to all those who labelled the rich Hindu civilization as “terrorist” and asserted that “this symbol will prove costly for the Congress”.

After getting bail from the Bombay High Court in April 2017, Sadhvi Pragya blamed former minister and Congress leader Chidambaram for putting her behind bars, alleging that she was “falsely implicated in the case to endorse the bogey of Saffron terrorism”.

Soon after the announcement of her candidature, Sadhvi Pragya admitted that she is inexperienced in politics but ready to take the charge to bring honour to ‘Saffron’, whose image has been tarnished by the opposition party.

Two days after joining the BJP, she courted controversy by saying former Mumbai ATS (Anti-Terrorist Squad) chief Hemant Karkare, who investigated her in the Malegaon case, died during the 26/11 terror attack because of her “curse”, triggering a major outcry following which she apologized.

Political commentators were shocked that a BJP candidate was making remarks against Karkare, the hero of the 26/11 attacks, who died fighting Pakistani terrorists in Mumbai. Given the BJP’s love for those in uniform and commitment to national security, this attack on a decorated police officer was both, offensive and hypocritical.

However, BJP spokesperson Nalin Kohli said that the remarks may be her point of view, not the party’s.

A few days later, the Sadhvi courted controversy again when she told a TV channel in an interview that she was among the people who demolished the Babri Masjid in Ayodhya on December 6, 1992 and that she was “proud” of it.

“We removed a blot from the country. We went to demolish the structure. I feel extremely proud that God gave me this opportunity and I could do that. We will make sure a Ram temple is constructed at that site,” Thakur told the channel.

Soon the Election Commission (EC) ordered registering an FIR against her for violating the model code of conduct.

A number of political commentators have warned that the fringe will become mainstream if a right-winger and terror accused candidate like the Sadhvi wins the Bhopal Lok Sabha constituency, which goes to the polls in the sixth phase on May 12.

There is also a pull and push factor in the Sadhvi’s campaign – while she may appeal to some voters, she is also expected to repel some.

There are fears that the world’s largest democracy stands at the threshold of its secular foundation and can slip into majoritarian rule, and by fielding Sadhvi Pragya in Bhopal, the BJP has given people another reason to worry about.

The BJP has undermined its own agenda of national security by choosing the terror accused Sadhvi. One can only hope that this election does not undermine our democracy.