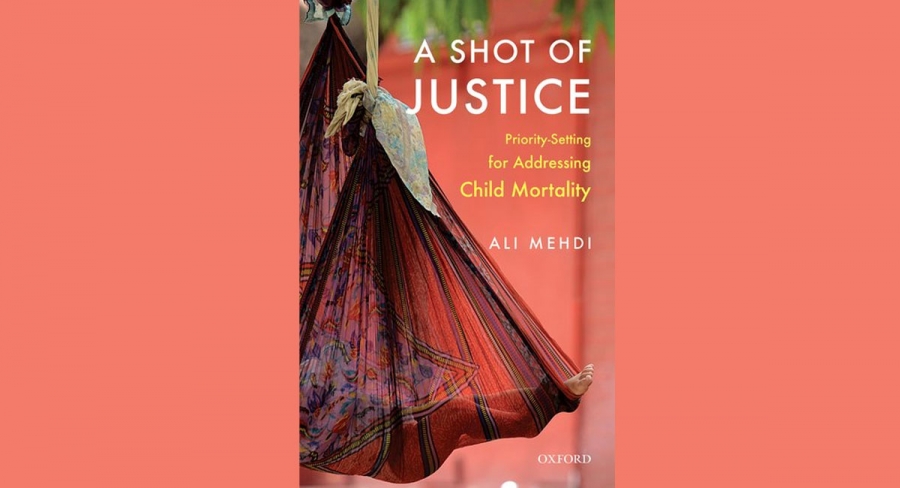 Justice for children is directly linked to lessening child mortality and in the true sense has the potential to anchor the broader pursuit of justice. It thus needs to be multidisciplinary, multisectoral and multifocal in approach, says a just-published scholarly treatise by Ali Mehdi, who leads the Health Policy Initiative of a leading think-tank and has also been assisting the government in formulating it position on health – and other areas – for G20 meetings on the sector.

“Justice for children seems to encapsulate a broader pursuit of justice given its interconnections with the status of women and households,” Mehdi, a Senior Fellow at the Indian Council for Research on International Economic Relations (ICRIER), writes in “Shot Of Justice – Priority Setting for Addressing Child Mortality” (OUP/pp 246/Rs 995).

However, “modern theories of justice ignored children because they have not regarded them as full citizens, capable of choice and responsibility…even children’s bare survival – let alone their health flourishing or future prospects in life – is so directly influenced by patterns of injustice”, contends Mehdi, who has more than 13 years of experience in health research on themes ranging from health equity and justice to chronic diseases, drug regulation and anticicrobial resistance.

“A complex pursuit of justice should be multidisciplinary, multisectoral and multifocal in its approach,” argues the author.

“The long-standing problem of child mortality – and profound inequities in the span and quality of survival – cannot be fundamentally addressed with short-sighted policies and short-sighted measures. We have to take every human life seriously. We cannot have one set of development standards of privileged, and another for those of underprivileged backgrounds,” Medhi maintains.

“The precariousness of survival is not as much about fate or destiny – or even lack of healthcare – as it is about deep-rooted inefficiences and inequalities that characterise our political, economic, social, cultural and other arrangements. There have been substantial, systematic and persistent inequities in the chances and conditions of survival between as well as within developing and developed countries and groups. However, there have been profound inefficiencies, too, that have adversely affected, in different measures, the chances of children from a diverse set of backgrounds to realise their optimal potentials,” the author points out.

How did this book come about?

“I have always been appalled by the condition of children in India. Despite all its welfare programmes, the country has not been kind to its weakest citizens. While there is, thankfully, a growing number of children whose parents can afford the best of education, health care and facilities for them, there are still way too many who continue to be victims of a vicious cycle of intergenerational inequality,” Mehdi told IANS in an interview.

“As I have argued in the book, though social justice has long been, and continues to be, an issue of intense political, social, and economic contention in India, conceptualisation – and, by implication, the depth of public debate, policy and practice – of social justice have been extremely limited.

“I decided to conceptualise justice with child mortality, the worst form and manifestation of injustice, as my practical anchor,” Mehdi explained.

It was not easy to pull off and he had to spend close to 14 hours a day in the University Freiburg’s main library (while pursuing his Masters) “with the soothing inspiration of the Black Forest at whose footsteps it was located, reading abstract philosophical texts from the perspective of what I was trying to achieve and occasionally travelling to India for data collection on child mortality and access to major determinants of child survival among selected groups, 1958 onwards, from a variety of, some very rare, sources”, the author said.

He also noted that the NDA government, during its 2014-19 tenure, “took a series of positive steps beyond the health sector – for instance, gas and toilet initiatives – for children’s and women’s health in particular. Sanitation is not only linked with children’s survival, health and height, but also with their human capital (see the work of Dean Spears, for instance). We now need evidence to see whether the intended positive health benefits have actually accrued”.

“So far, we have conducted field research in several Indian states (Kerala, Tamil Nadu, Karnataka, Telangana, Andhra Pradesh, Maharashtra, Gujarat, Rajasthan, Uttar Pradesh, Delhi and Himachal Pradesh) and developed and developing countries (US, Canada, UK, Germany, Switzerland, Japan, Singapore, China, Sri Lanka, Indonesia and South Africa) for projects commissioned by the finance and health ministries, as also NITI Aayog, and sponsored by WHO, DFID, PhRMA, etc. We have been working with the Union Ministry of Finance to help develop Government of India’s position on health – and other areas – for G20 meetings since 2018,” he Mehdi explained.