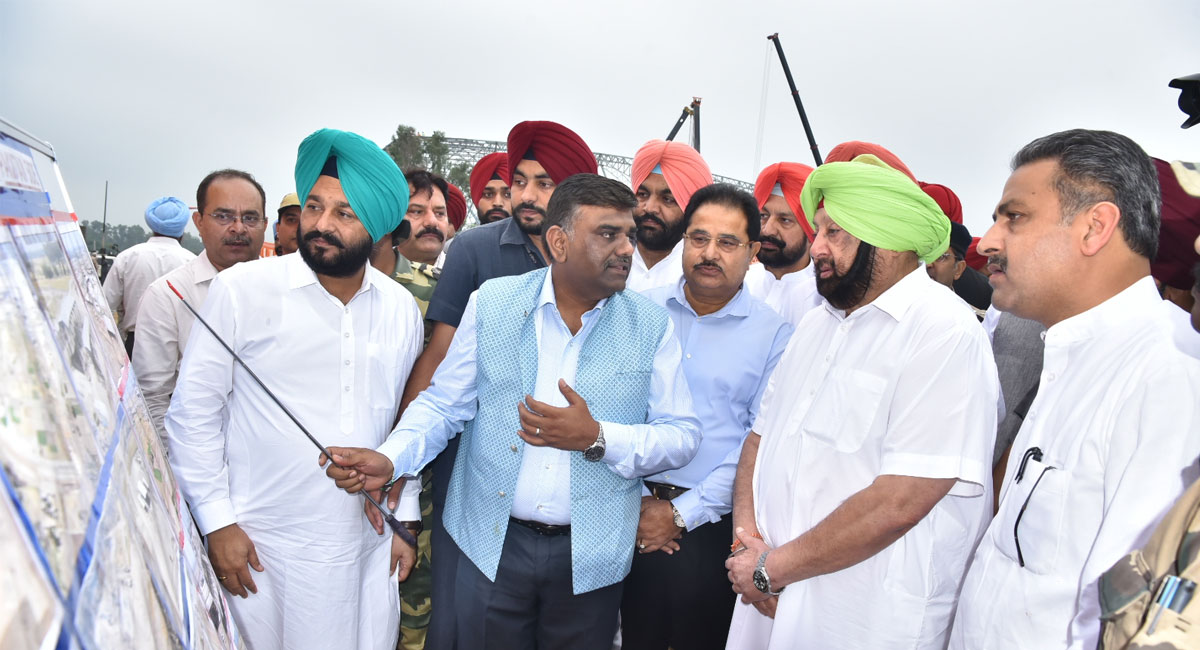 After decades of failed efforts, the Kartarpur Corridor is finally becoming a reality

As they say, faith knows no bounds. Early last month a video went viral on social media about a bus on its way from the Canadian city of Brampton to Kartarpur in Pakistan, with its final stop being Sultanpur Lodhi in India. With ten Sikh pilgrims on board a state-of-the-art camper van, this two-month-long journey – which commenced on September 3 and is concluding this month – is a non-profit initiative launched by International Punjabi Foundation Canada in celebration of the 550th birth anniversary of Sikhism founder Guru Nanak Dev.

Pakistan, apart from issuing some 10,000 visas to Sikh pilgrims, has reportedly operationalised at least one customised train to help devotees celebrate the special occasion in the great saint’s birth place of Nankana Sahib and his final resting place of Darbar Sahib Kartarpur. The first batch of pilgrims from India are scheduled to proceed early this month from the Atari railway station to the Wagah railway station in Pakistan before starting their journey to Nankana Sahib.

Meanwhile in India, the main theme on this front has been revolving around the Kartarpur corridor, a 4.5-km-long path connecting two sacred Sikh shrines – Dera Baba Nanak (where the great saint used to meditate every day) in Gurdaspur district of Punjab in India to Kartarpur Sahib Gurdwara (where Guru Nanak spent his last 18 years) in Narowal district of Pakistan’s Punjab province.

This had been a long time coming.

Ever since Partition, the Radcliffe line had divided the region along the Ravi river, awarding the right bank (including Kartarpur) to Pakistan and the left bank (including Dera Baba Nanak) to India. The Sikh community of India had been seeking access to one of their holiest shrines across the border, especially after the bridge connecting the two places (which reportedly allowed them to cross over the Ravi informally to visit Gurudwara Darbar Sahib Kartarpur) was destroyed in the Indo-Pakistani War of 1965.

Thanks to the troubled relations between the two countries over the ensuing decades, little was done for the devotees’ cause on either side of the border. In fact, the Kartarpur Sahib gurudwara had been virtually abandoned and shut since Independence, serving instead as a mere shed for the cattle of local villagers with its land usurped by sharecroppers.

It was not until a couple of decades ago, during the prime ministership of Atal Bihari Vajpayee and Nawaz Sharif, when the concept of a corridor took birth and signs of change were visible at the Kartarpur Sahib gurudwara. After the success of the bus diplomacy in 1999, Pakistan renovated it and made it available for viewing by Indians from across the border.

However, with the Kargil War breaking out soon after, the prospects of a corridor project went into cold storage for almost a decade. A ray of hope emerged once again in 2008 when former Indian foreign minister Pranab Mukherjee picked up the cause and discussed with his Pakistani counterpart S.M. Qureshi the prospect of visa-free travel to Kartarpur – but the Mumbai terror attacks carried out by Pakistan-based Lashkar-e-Taiba militants effectively put paid to that initiative as relations between New Delhi and Islamabad once again hit an abysmal low.

Another decade passed by and the corridor project seemed all but a forgotten and forsaken matter – until August last year when Navjot Singh Sidhu, the then Punjab tourism minister, returned from his controversial visit to cricketer friend Imran Khan’s prime ministerial swearing-in ceremony and revealed that Pakistan army chief Qamar Javed Bajwa had expressed his nation’s willingness to cooperate with India on the Kartarpur corridor project ahead of the 550th birth anniversary of Guru Nanak.

After that things began moving forward as the Amarinder Singh government in Punjab approached the Centre for its support on the matter the same month, which eventually led to the Indian Cabinet’s approval in November of the plan for the corridor project.

On November 26 last year, while Indian vice president Venkaiah Naidu laid the foundation stone of the Dera Baba Nanak-Kartarpur Sahib corridor at a village called Mann in Gurdaspur district, Pakistan Prime Minister followed suit two days later in Punjab province’s Narowal district. The corridor was scheduled to be completed by October 31 this year, a week ahead of the start of the anniversary celebrations.

Despite these encouraging developments, there was no smooth sailing for the project in the following months. But India has been doing everything it can to overcome – or work around – the challenges.

For instance, although both countries officially agreed in August this year to facilitate visa-free travel for 5,000 Indian devotees throughout the year to Kartarpur, Islamabad persistently kept rejecting New Delhi’s proposal to have Indian consular officers at the site. This was an important requirement for India over its fears that the Kartarpur corridor would be used by Pakistan to push forward the Pro-Khalistan agenda (establishment of Punjab as a sovereign nation).

Indian intelligence agencies had been warning that fundamentalist and separatist organisations such as Sikhs For Justice (SFJ) were planning to use the Kartarpur corridor to push their secessionist agenda through radicalisation of pilgrims travelling to Pakistan.

Although India had announced a ban on SFJ – under Section 3 of the Unlawful Activities Prevention Act – for its alleged anti-national activities, Pakistan was not forthcoming enough about whether it had actually done the same. While Islamabad claimed to have banned the SFJ, Indian intelligence agencies have gathered enough evidence to claim that Pakistan continues to provide financial and logistical support to local terrorists in Punjab to carry out subversive activities.

They even revealed that among the several Pakistan-based terrorist groups that were smuggling weapons into India – most recently through drones since the abrogation of Article 370 in Jammu and Kashmir on August 5 – there were pro-Khalistani outfits working under the ISI as well. And many gurdwaras in Pakistan are also still being used to promote the pro-Khalistan campaign, with pamphlets talking about “Sikh Referendum 2020” being distributed at some.

Therefore, to compensate for the absence of consular officers on site in Kartarpur, the Home Ministry of India ingeniously integrated a few processes into its online registration system for the corridor Project to counter the pro-Khalistan agenda.

All pilgrims must register themselves on the designated online portal – prakashpurb550.mha.gov.in – at least a month ahead of their planned date of visit. Three to four days ahead of their preferred date of travel, they will receive an official confirmation – or otherwise – by SMS and email after their profiles are properly verified. Screening of pilgrim profiles in this manner will go a long way in helping Indian authorities ensure that people leaning towards anti-national thought processes cannot get a chance to meet pro-Khalistan elements on Pakistani soil.

Then, there were reports that Pakistan was hesitant to build the main bridge over the Ravi river that is supposed to be used by pilgrims using the 4.5km corridor to visit the Kartarpur shrine.

As recently as October 17, an official with knowledge about development of the project revealed that the construction of the bridge from the Indian side was all but over, but Pakistan had not indicated when – or whether – it would complete the remaining part of the bridge.

As a solution to the issue, the Indian government built an alternative service road just a few metres away from the bridge and about 300 metres from the International Border, which pilgrims can comfortably use until the main bridge is ready.

Prime Minister Narendra Modi, during his last day of campaigning in Haryana last month, declared: “The distance between our Guru Nanak Dev Ji’s holy place, Kartarpur Sahib and all of us is now ending.”

“In 1947, those who were responsible for drawing the dividing line did not think that the devotees should not be separated from the Guru by a distance of only four kilometres. Even after this, should the Congress government not have tried to erase this distance in 70 years?” he said in Ellenabad town of Sirsa district.

“The Kartarpur corridor is almost complete now. This opportunity has come seven decades after independence, 70 years went by. What can be a bigger misfortune than this that we had to see a holy place from afar, through a pair of binoculars?” the Prime Minister asked.

On October 24, India and Pakistan finally signed the Kartarpur pact, clearing the way for the inauguration and operationalisation of the corridor this month as per schedule.

At long last, pilgrims can travel visa-free to the holy shrine although they must carry a valid passport. They can either visit individually, or in groups, and also by foot. Under the agreement, the Indian government will inform Pakistan authorities about the list of the pilgrims 10 days in advance and pilgrims will be notified through mail four days ahead of the travel.

Operational throughout the year, the corridor will be open from dawn to dusk – but the pilgrims must complete their trip on the same day.

However, the one outstanding issue that India has not been able to resolve is the US$20 fee that Pakistan will levy on each pilgrim for every visit as service charge.

Although India has been repeatedly urging Pakistan over the past few weeks to waive the fee on grounds that such a charge would not be in keeping with the religious and spiritual sentiments of the pilgrims, Islamabad has remained insistent, arguing that the fees would be necessary to partially offset the high operational costs it must bear towards the project.

“India remains ready to amend the agreement accordingly … It is expected that Pakistan will fulfil the assurance that it would build the bridge on their side at the earliest,” Das said.

Noting that all the necessary infrastructural facilities, including the highway and the Passenger Terminal Building (PTB), were nearing completion for the timely inauguration of the Kartarpur Sahib corridor, he assured that there would also be robust security arrangements for safe and worry-free passage of pilgrims.

Now, as per the present schedule shared by the Ministry of Home Affairs, Prime Minister Modi will inaugurate the Kartarpur corridor on November 9 and see off the first batch of pilgrims across the border to Kartarpur Sahib gurdwara.

Punjab Chief Minister Amarinder Singh will lead a Sikh delegation – comprising all of the 117 state legislators, Lok Sabha and Rajya Sabha MPs from Punjab, Shiromani Gurudwara Parbandhak Committee (SGPC) members, members of the Sant Samaj and representatives of every recognised political party in the state – that will pay obeisance at the shrine and return the same day.

Former prime minister Manmohan Singh, who had earlier rejected Pakistani foreign minister Shah Mahmood Qureshi’s official invitation to the inaugural ceremony of the Kartarpur Sahib corridor, will also be going – but as a common pilgrim.

Some optimistic political observers are hailing the success of the Kartarpur corridor project as a welcome development at  a time when tensions between India and Pakistan have touched new highs after abrogation of Article 370 in Jammu and Kashmir and all that has since ensued on that front.

The fact that the two neighbours continued to discuss and move forward with the corridor project amid scaled-down diplomatic ties, not to mention the frequent cross-border shelling across the border up north in Jammu and Kashmir, also offers hope to some that Pakistan will eventually waive that US$20 service charge as a goodwill gesture.

Given the current state and outlook of India-Pakistan relations, such expectations may seem Panglossian – yet the hopeful might as well have faith because, as they say, it can move mountains.