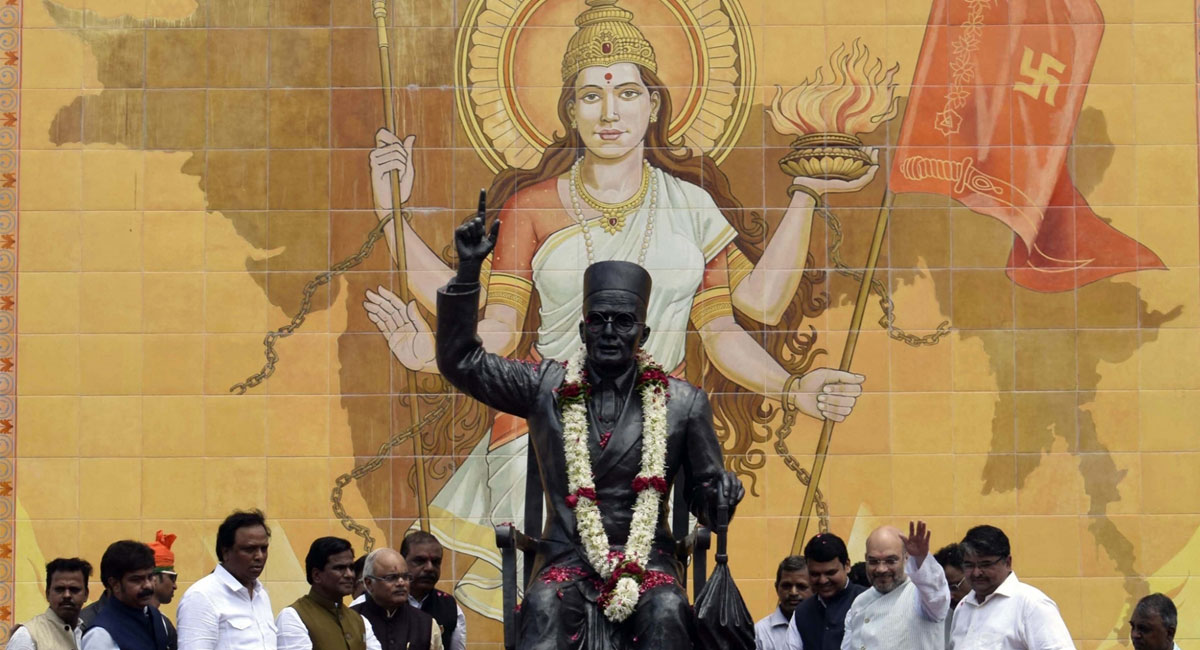 A revolutionary freedom fighter, Vinayak Damodar Savarkar inspired a generation of Indians with his fierce nationalism and social reforms even as he alienated a large section of society with his Hindutva ideology and call for a Hindu rashtra.

Now almost five decades since his death, Savarkar has once again captured national consciousness as political leaders across the spectrum debate whether to posthumously award him the Bharat Ratna – the country’s highest civilian honour.

That this proposal was made in the year that marked the 150th anniversary of Mahatma Gandhi whose murderer Nathuram Godse took inspiration from Savarkar is something that many political pundits have criticised.

In the history of India’s freedom struggle, Savarkar is both hero and villain.

A firebrand revolutionary, Savarkar played a major role in the freedom struggle by coordinating among revolutionaries in different states while he was a student in Pune’s Fergusson College. While studying in London, he continued to be part of the revolutionary movement in Europe and wrote ‘Indian War of Independence 1857’ which gained much popularity.

This was the first time that the “sepoy mutiny” was referred to as a freedom struggle and seen from an Indian perspective. His book inspired a generation of freedom fighters such as Bhagat Singh, Sukhdev and Netaji Subhash Chandra Bose.

The British slapped criminal cases on Savarkar and extradited him to India, locking him up in jail. He and his elder brother Ganesh Damodar were sent to the awful Cellular Jail in the Kala Pani of the Andamans where he spent 11 years in solitary confinement.

Here he was tortured for years along with other revolutionaries such as Barin Ghose, Nand Gopal, Hrishikesh Kanjilal, Sudhir Kumar Sarkar and later Sachindra Nath Sanyal. Savarkar sought general amnesty six times but was turned down by the British.

Mahatma Gandhi also submitted a petition on behalf of the Savarkar brothers seeking their release in 1920. After his release from prison in 1924, Savarkar was kept in confinement in Ratnagiri for 13 years and ordered to stop all anti-imperial activities. It was here that his Hindutva ideology was first implemented and he started his efforts towards social reform in Hindu society.

Savarkar worked hard for the upliftment of Dalits, endorsing inter-caste marriage and temple entry for people of all castes while calling for total abolishment of the caste system.

Savarkar’s social work earned him praise from both Mahatma Gandhi and Dr BR Ambedkar, but he shifted all his attention towards politics, and joined the All India Hindu Mahasabha in 1937.

He did not want to join the Congress and repeatedly criticised the party, warning that its Muslim appeasement politics will do more harm than good to the nation.

Critics say Savarkar had bigoted views on minorities and saw them as a threat to the nation but his biographers argue that his vision of a Hindu rashtra did not relegate the minorities to second-class citizens. His opposition was only to giving minorities special rights at the cost of Hindus.

Savarkar’s most problematic legacy was his alleged role in the assassination of Mahatma Gandhi. During the trial of Godse, Savarkar was also tried but honourably exonerated due to want of evidence. In his dying declaration, Godse said he was disillusioned with Savarkar and the latter did not know of his plans about the murder.

After Gandhi’s assassination, Savarkar said: “Mahatma Gandhi’s assassination is too shocking. I condemn unequivocally such fratricidal crimes whether perpetuated by an individual or by mob frenzy. I appeal to the people to stand by the Central Government of free India and maintain order.”

The relationship between Savarkar and Gandhi was of mutual admiration but both were poles apart in terms of political ideology. While Savarkar endorsed a “Hindu nation”, Gandhi believed in an undivided independent India.

While Gandhi became the favourite of the liberal left in the country, Savarkar emerged as the idol of Hindu right-wing leaders. However, despite their differences the two leaders agreed on many issues.

Both were firm believers of the Hindu faith but interpreted the religion differently. While Gandhi praised Lord Ram as selfless and conciliatory, Savarkar spoke about Goddess Durga as the destroyer of evil.

Rashtriya Swayaksevak Sangh ideologue J Nandakumar says Gandhi called Savarkar a “faithful son of Bharat … brave, clever and frankly, a revolutionary”. Both leaders opposed untouchability, but were firm believers in its root cause – the Varnashrama Dharma.

When Savarkar was put on trial on allegations of hatching a plot to assassinate Gandhi, he became something of a pariah. Even though he was acquitted, he continued to be seen as a villain who indirectly inspired Gandhi’s murder.

Congress stalwarts such as Sardar Patel and Jawahar Lal Nehru were very critical of him. Patel was convinced of Savarkar’s guilt. In a letter he wrote to Nehru soon after Gandhi’s death, he stated the following: “A fanatical wing of the Hindu Mahasabha directly under Savarkar murdered Gandhi.”

Savarkar’s reputation as a Hindutva icon and his association with Godse continue to draw criticism but his actions as a fierce nationalist and revolutionary patriot who spent many years incarcerated by the British also draw sympathy and admiration.

Some believe a Bharat Ratna may be a step in correcting Savarkar’s omission in history books while others see the government’s proposal as part of its larger pro-Hindutva ideology.

So divisive is Savarkar that when his portrait was first installed in the Central Hall of Parliament in February 2003, the non-BJP opposition parties had boycotted the ceremony, except for Chandra Shekhar who was an MP.

The BJP has long accused the Congress of being selective when it comes to honouring freedom fighters, ignoring many deserving personalities while favouring its own leaders. On the other hand, the Congress has criticised the Bhartiya Janata Party (BJP) for trying to rewrite Indian history to suit its own views.

The Shiv Sena has been demanding a Bharat Ratna for Savarkar, going so far as to say that those who do are critical of Savarkar should be thrashed. The BJP put up the Bharat Ratna demand in its election manifesto for the recent Maharashtra assembly elections.

This is not surprising given that Prime Minister Narendra Modi counts Savarkar as one of his idols and BJP president and Union Home Minister Amit Shah is also an ardent follower. Shah even has an image of the revolutionary in his drawing room.

The Congress is still questioning the demand and its spokesperson Manish Tewari said: “I am shocked that on one hand the BJP is praising Mahatma Gandhi and on the other is demanding Bharat Ratna for Savarkar. In a country where Mahatma Gandhi is made to commit suicide in textbooks, then anything can be possible. On a more serious note, though Savarkar was charge-sheeted for Mahatma’s murder, it is correct that he was acquitted.”

Congress leader and former prime minister Manmohan Singh tried to play down Tewari’s statements and said that the Congress was not against Savarkar, but opposed the Hindutva ideology that he propagated. He revealed that former prime minister Indira Gandhi had even issued a postal stamp commemorating Savarkar.

Congress national spokesperson Abhishek Singhvi called Savarkar, an accomplished man, who played a part in the freedom struggle and went to jail for the country.

“I personally don’t subscribe to Savarkar’s ideology but that doesn’t take away the fact that he was an accomplished man who played a part in our freedom struggle, fight for Dalit rights and went to jail for the country.”

Prime Minister Narendra Modi has praised Savarkar time and again. On Savarkar’s birth anniversary in May this year, Modi said: “It was Veer Savarkar who boldly expostulated that whatever happened in 1857 was not a revolt but was indeed the First War of Independence.”

While it is true that India has not honoured many of its great freedom fighters, demanding an honour for Savarkar in the month and year of Gandhi’s 150th anniversary is blasphemous for many Indians.

The government has launched many initiatives to celebrate the Mahatma, but its efforts to honour the man who inspired Gandhi’s murder is seen as hypocritical by many political observers. In these polarised times, the government must either choose the Mahatma or Savarkar. Or as some political experts say, Team Modi cannot have its cake and eat it too.