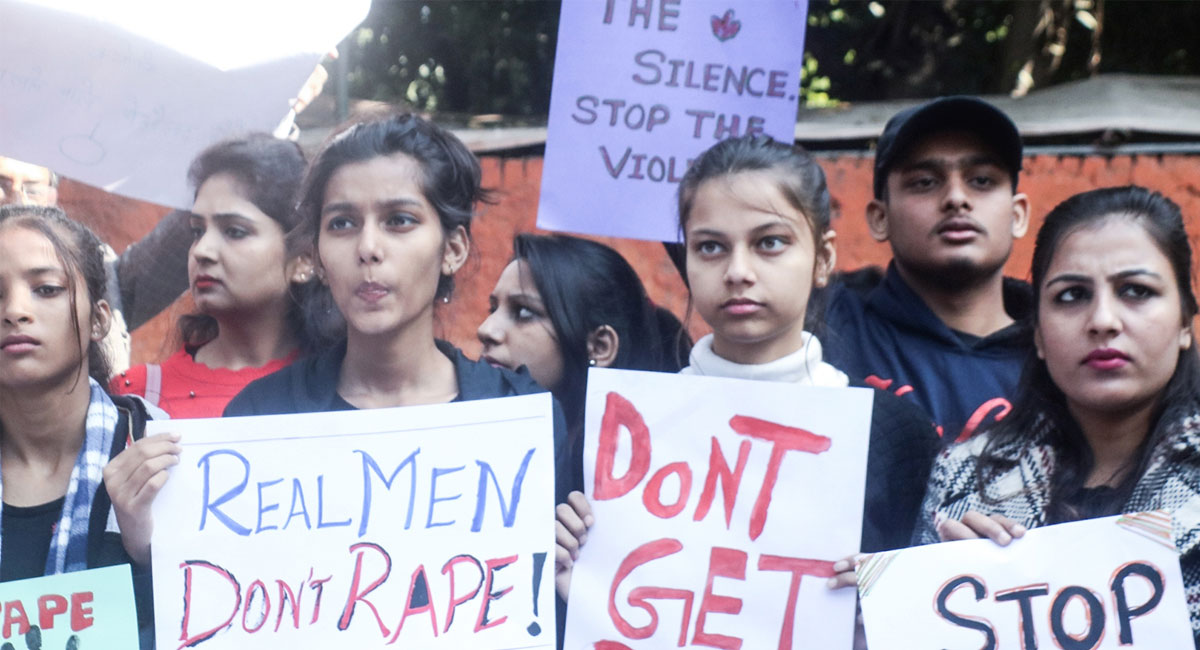 When parliamentarians call for the public lynching of rapists and the average Indian celebrates a police encounter as justice, blame must be placed at the doors of an impotent judicial system.

Statistics say a woman is raped every 20 minutes in the country, but conviction rates remain low and our snail-paced legal system ensures that justice is as often delayed as it is denied.

In the aftermath of the horrific Hyderabad and Unnao cases, it is the judicial system itself that stands in the dock.

In recent years the government has set up an additional 1000 fast-track courts to deal with the backlog of rape cases but it is clearly not enough. The Nirbhaya case in 2012 forced the government to pass new laws but activists say while the laws are good, they continue to remain just pieces of paper, with little to no implementation on the ground.

The accused in the Nirbhaya case, which shook the conscience of the nation, are on death row but have used every loophole in law to delay their execution. Seven years have passed since Nirbhaya died, but her parents are yet to see the accused brought to justice.

Two of the accused recently submitted mercy petitions with reasons that appeared to make a complete mockery of the judicial system.

It came as no surprise then that Nirbhaya’s parents were among the first to support the Hyderabad encounter which took place after widespread public outrage over the rape and murder of a 26-year-old veterinarian in the city.

The police have pieced together the fateful night on November 27. The victim left her house in Shamshabad for Kolluru village where she worked at a government veterinary hospital. She returned in the evening at the toll plaza, parked her scooty nearby and took a cab to go to Gachibowli to visit a dermatologist.

Unbeknownst to her, she was being watched by four men sitting in a circle and sharing a bottle of whiskey at the toll plaza. Mohammed Arif (26), Jolly Shiva (20), Jollu Naveen (20) and Chenna Keshavalu (21), worked as drivers and cleaners of a lorry that plied between Bangalore and Hyderabad.

One of them punctured her scooty’s tyre soon after she left. The trap had been set and the men waited for her to come back while they sat and drank liquor.  At 9.20 pm, she returned to the toll plaza and found her two-wheeler punctured.

The leader of the gang, Arif, then approached the victim and said that he wanted to help. Police have the testimony of a toll booth operator who spoke to Arif and the victim when they enquired about the nearest bike repair shop. Sources say Arif even gave the vet his phone number to gain her trust.

The operator pointed a repair shop a short distance away to the pair, but this road was on the side road leading off the highway. Arif was then joined by the other three members of his group, one of whom then proceeded to the repair shop with the scooty while the others waited with her near the toll plaza.

While waiting, the remaining three coaxed the victim to walk towards a dark compound surrounded by overgrown bushes near the toll plaza. This is when the victim started feeling uneasy and called her sister in a state of panic, saying that she was feeling scared of the men around her.

By the time she hung up the phone and her sister called her back again, the fourth man had returned with her scooty and her phone was snatched by one of the men and turned off.

According to the police report, the gang of four then forced the victim to consume liquor and took turns to rape her. “They forcibly committed gang rape against her will and consent, robbed her of her belongings, and murdered her by smothering,” said the remand report of the Shadnagar police.

The police believe the crime took place between 9.40-10.30 pm and by 11 pm the accused took her dead body into their lorry and planned its disposal.

Finding her sister’s phone switched off, the victim’s sister rushed to file a complaint at the nearest police station at Rajiv Gandhi International Airport police station, but she was told by the officers on duty that the toll plaza did not fall in their jurisdiction.

Police apathy in the face of crimes against women is just one of the many reasons why women do not feel safe in this country. The victim’s family was reportedly told by cops that the victim may have “eloped with a boyfriend” and also asked whether she had any “lovers or affairs” when they tried to register a missing-person compliant.

The family managed to register a complaint only at 3.10 am at Shadnagar police station. By then, all was over and the young veterinarian had lost her life.

People in Hyderabad are shocked that a young woman was gang-raped and murdered just a few metres off the Nehru-ORR toll plaza, a location that lakhs of Hyderabadis use while commuting in the capital city.

After killing the victim, two of the accused drove the lorry towards Bangalore while the other two followed behind on the victim’s scooter.

When Shiva and Naveen tried to purchase petrol from a pump in a plastic bottle at midnight, the worker there grew suspicious and refused to sell them any petrol.

The next morning when the worker saw news reports about the murder, he called the Shadnagar police and told the police that two men aged 20 had come to the petrol pump at midnight on a red scooty which matched the victim’s vehicle.

At the next pump, the pair managed to buy petrol and decided to take the body off the Hyderabad-Bangalore highway at the Chatanpally crossing towards a quiet underpass.

So secluded and dark is this underpass that nobody could have noticed a body being set alight inside it. It was not till 7 am the next morning on November 28 that the police station in Shadnagar received information about the burning body.

A police team arrived shortly and family members of the missing vet identified the charred body the moment they saw it.

The Hyderabad case made headlines across the country with increasing public outrage over the ghastly crime directed at judicial inefficiency, police apathy and the lack of will on the part of the administrative machinery.

Politicians and citizens demanded immediate death penalty for the accused, some going so far as to say they must be publicly lynched.

Facing the ire of angry residents in the wake of the ghastly murder, the Telangana Police went from villain to hero in a span of a week when they shot dead all the four accused in the case on December 6.

The accused were gunned down at the same spot where they had dumped the victim’s body and set it ablaze, with the police saying they acted in self-defence when the accused tried to flee the spot.

News of the encounter was hailed as justice and was met with celebrations across the country, with the family of the victim satisfied with the turn of events.

Some called the encounter an extrajudicial killing and believe that it sets a terrible precedent in the country.

Shamina Shafiq, a noted women rights activist, said, “No amount of condolence can compensate the pain her parents are going through. But we can’t institutionalise such encounters lest we should become a banana republic.”

“The jubilation over Friday encounter shows that people have lost faith in the judicial system of the country. To get it back, responsibilities should be fixed,” Shafiq said.

Those in favour of such encounters point to the Unnao victim who was set ablaze in her village on her way to Rae Bareli for a court hearing on December 5.

Coming just a few days after the Hyderabad case, the incident in Unnao is a grim reminder of how the present legal, judicial and administrative machinery is failing people, especially our women.

In March, a 23-year-old girl from Unnao had filed a rape case against two of the accused Shivam and Shubham Trivedi who had allegedly abducted and raped her and video-graphed the act.

When the accused were released on bail, they started chasing and threatening her. Thereafter, the victim and her family visited the local police station and filed a complaint against the accused but the police turned a deaf ear to the complaint.

The victim belonged to a lower caste family while the accused hailed from an upper-caste family with a lot of clout in the village.

Lawyer S. N. Maurya, who represented the victim in the rape case, said that Shivam was threatening the woman to withdraw the case and was forcing for a compromise.

The victim was attacked outside the Sindupur village in Unnao when she was on her way to a court in Rae Bareli to attend a hearing in the rape case. She was abducted by the five men Harishankar Trivedi, Ram Kishore Trivedi, Umesh Bajpai, Shivam and Shubham Trivedi who then beat her, stabbed her and set her on fire.

Villagers are haunted by the image of the victim running ablaze almost kilometre for help. She asked a passer-by for his phone and then made a call to the police herself.

In her statement, she named all the five accused and narrated the ordeal. Out of the five persons, including two who were accused in the rape case, the Unnao rape survivor named, two have been arrested, the UP police said.

After sustaining more than 90 per cent injuries, the victim was airlifted to Delhi’s Safdarjung hospital where she succumbed to her injuries.

Supreme Court lawyer Himanjali Gautam said delay in hanging of the Nirbhaya case convicts had led to situations like the Hyderabad encounter and the Unnao cases.

“The Unnao rape case is an example of failure of the system. Why was the victim not given police protection? Why were the rape accused given bail?”

A wrong message had gone in the society with the accused feeling emboldened — to roam free with bail or wipe out the victim by burning them down, she said and added, on the other hand incidents, like the Hyderabad encounter, might work as a deterrent to such crimes.

“Had Nirbhaya’s convicts been hanged by now, the situation like the Hyderabad encounter could have been avoided,” she remarked.

Expressing concerns over delays in meting out punishment in rape cases, veteran social crusader Kisan Baburao alias Anna Hazare said that the last time a rapist-cum-murderer was hanged was on August 14, 2005 in West Bengal.

“Since then, not a single death penalty has been executed for any such convict given the death verdict in the country. Currently, there are 426 convicts awaiting execution,” Hazare claimed, in a letter to Prime Minister Narendra Modi.

“People have started feeling that the delays, obstacles and difficulties in getting justice through the system is itself an injustice. This is the reason for the mass support to the recent Hyderabad encounters. People now want that such criminals should be eliminated in such encounters,” Hazare said.

Hazare’s words encapsulate the frustration of millions of Indians. The country is in the middle of a rape crisis and unless it overhauls its judicial machinery and delivers justice, lynching and encounters will be the only solution for a people fed up of waiting and watching.