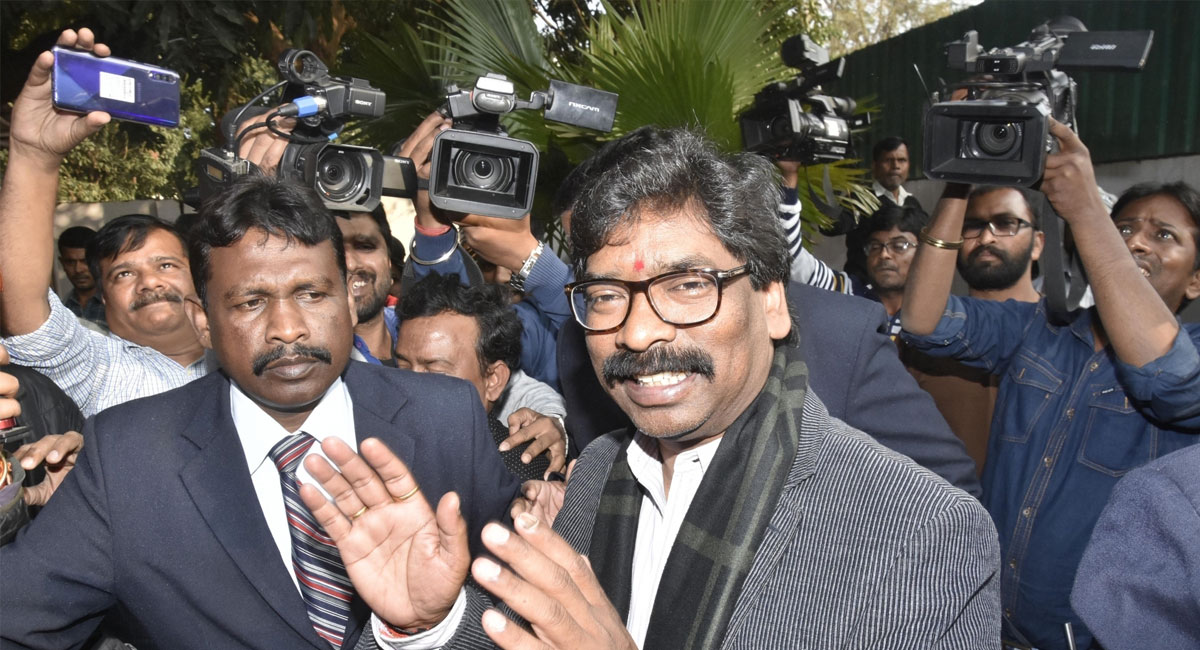 “I’m certain that we are winning and the government will be formed under the leadership of the BJP,” said a confident-sounding Raghubar Das, the then Chief Minister of Jharkhand, to the media on December 23 – at a time when the Election Commission had revealed that the Bharatiya Janata Party was leading on 28 seats and the Grand Alliance of Jharkhand Mukti Morcha (JMM), Congress and the Rashtriya Janata Dal was leading on 41 out of the 81 seats in the recently concluded assembly elections.

And when he himself was leading independent candidate Saryu Roy by a razor-thin margin in Jamshedpur East assembly constituency, one where Das had never lost since well near a quarter of a century.

But by the end of that day, it became clear as crystal that JMM leader and the Grand Alliance’s chief ministerial candidate Hemant Soren was going to become the next Chief Minister of Jharkhand.

Das had to eat his words, because not only was the BJP (with 25 seats) squarely  beaten by the Grand Alliance (47), but he also lost to former colleague Roy by a staggering 15,000 votes.

It was clear from this one instance that Das’s complacency must have had a role to play in his own and his party’s humiliating defeat. But political analysts and his critics pointed to a plethora of other problems in the man.

Some reckoned that the former Chief Minister’s style of functioning while running the state administration  was the prime reason behind the BJP’s loss in Jharkhand. Government sources revealed that Das, just like former Bihar CM Lalu Prasad Yadav, dealt disrespectfully with officials and ended up demoralising them. He would often even lose his temper on party workers and media personnel. All this while people’s grievances were not being addressed and protestors – whether it be Aganwadi workers seeking a raise in their wages or para teachers calling for regularisation of their service – were being ill-treated.

Others averred that Das, after coming to power in 2014, took the terrible step of systematically sidelining all state-level leaders from within his party as well as that of alliance partner All Jharkhand Students Union’s (AJSU). He sidelined BJP’s tribal face Arjun Munda and denied tickets to all Munda loyalists during 2019 Assembly ticket distribution. As for AJSU, its demands for a common agenda for the polls and a larger role in the alliance were rejected by the central BJP. As a result, AJSU president Sudesh Mahto played the role of opposition despite being a part of the government. It is widely believed in political circles that the alliance between the BJP and AJSU did not work out thanks primarily to the Das’s highhandedness.

Many hold the BJP equally, if not more, responsible for its defeat in the mineral-rich state.

Roy, a former Jharkhand BJP minister and the independent candidate who beat Das this time, stated that the BJP had erred at the outset by handing Das the leadership role in the state. In a recent interview, Roy revealed that even though Das had become unpopular in Jharkhand due to his “dishonesty and arrogance”, the BJP high command failed to understand the ground realities and continued to let Das shoulder the entire responsibility of the party.

Some, including BJP MPs from the state, strongly suggest that the party lost the Jharkhand Assembly elections for looking past loyal workers and trusting outsiders and turncoats.

Nishikant Dubey, BJP MP from Godda in Jharkhand, stated in a Facebook post that the party faced defeat as it had shown too much confidence in outsiders than own workers.

“We lost because of the BJP rebels, and were not able to assess the mood of party workers. We had too much faith in those who had joined the BJP from other parties,” said Nishikant Dubey, a BJP MP from Godda in Jharkhand, in a Facebook post.

“The victory of Satyanand Bhokta from Chatra, Baidyanath Ram from Latehar, Sameer Mohanty from Baharagora, Umashankar Akela from Barhi, Amit Yadav from Barkatha and Saryu Roy from Jamshedpur East is the example,” his Facebook post read.

Party rebel Amit Yadav beat BJP’s Janki Yadav by more than 24,000 votes. Janki Yadav had joined the BJP after leaving the Jharkhand Vikas Morcha (JVM). When the BJP denied ticket to Amit Yadav he contested elections as an Independent. Similarly, Sameer Mohanty won by 60,565 votes the Baharagora seat from where the BJP had nominated Kunal Sarangi. He had quit the Jharkhand Mukti Morcha (JMM) to join the BJP.

The BJP had denied ticket to 13 more MLAs and nominated over 24 turncoats, most of whom lost.

Praveen Prabhakar, who quit BJP to join the National People’s Party (NPP) after being denied ticket, said: “The BJP lost because it gave to ticket to several inept people with bad image. I felt bad and warned the senior leadership. But due to lack of corrective measures, I resigned from the party.”

“The surveys were also ignored during the ticket distribution,” he added.

The Jharkhand result assumes added significance considering the national backdrop against which it came about.

While most political rivals of the BJP, from Trinamool Congress boss Mamata Banerjee to Delhi Chief Minister Arvind Kejriwal, claimed that the Jharkhand outcome was a verdict on the BJP’s on Citizenship Amendment Act (CAA) and the National Registration of Citizens (NRC), the outcome in terms of seats won and lost by the BJP indicate that negative publicity on the issues did not have much to do with the party’s result.

Of the 15 assembly constituencies that voted in the fourth phase held on December 16, the JMM-led alliance won six seats, the BJP won eight seats, and one seat went to CPI-MLL. As compared to the 2014 assembly election results, the BJP had won 11 seats of which it managed to retain six, win two new seats, and lose five seats. The BJP suffered an overall loss of three seats in this phase.

In the fifth and final phase held on December 20 which saw polls in 16 assembly constituencies, the JMM alliance won 11 seats and the BJP retained its overall number of five seats from the previous elections. In this phase, the BJP retained two seats, won three new seats and lost two seats.

If anything, these figures showed that the state’s voters’ focus was on local issues rather than on national issues, which were reserved only for the Lok Sabha elections.

Yet a loss is a loss, and the BJP has had quite a few over the past year.

Since December 2018, the saffron party has lost assembly elections in Chhattisgarh, Rajasthan, Madhya Pradesh, Maharashtra and now Jharkhand. Not to mention the slew of bypolls where it bit the dust along the way.

Although the BJP achieved a thumping victory in the Lok Sabha elections in May last year by winning 303 seats, most political observers agree that the party’s inability to improve the economic condition of the nation and its renewed focus on Hindutva-nationalist agenda since the beginning of its second term at the Centre have been contributing to its electoral setbacks across the country.

The Jharkhand loss should serve as a timely reminder for the saffron party to get its act together and set its priorities right – more in interest of the nation rather than anything else. If it cannot then it must brace for far more – and bigger – losses in the not-too-distant future.