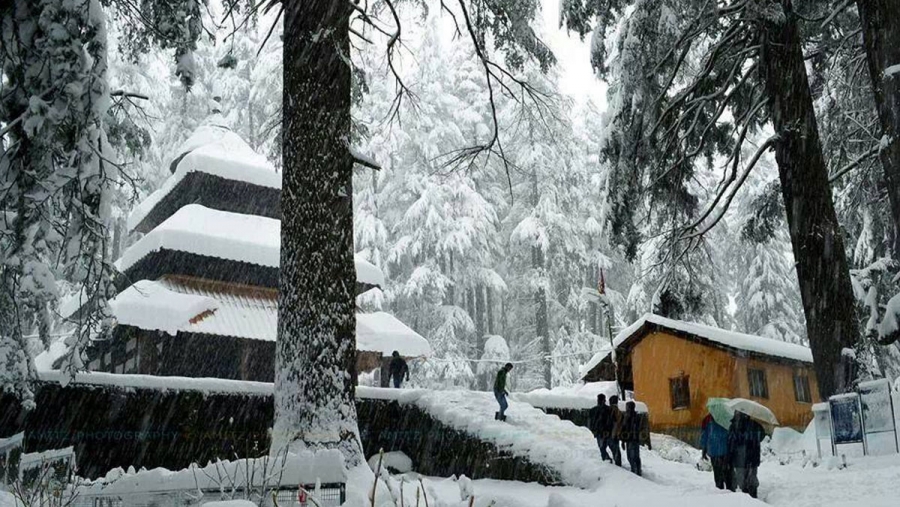 With the gods “away” on their sojourn this time of the year, some villages around Manali in Himachal Pradesh have gone quiet as usual

It is silence for the gods in 10 villages dotting the outskirts of the picturesque hill resort of Manali, currently marooned under a blanket of snow.

For 41 days, silence will reign in these villages as locals have switched on the mute button, silencing their radios and even mobile ringtones.

This ‘do not disturb’ policy has been religiously followed for long in Goshal, Shanag and eight other tiny hamlets – with a population less than 10,000 – in Kullu district, some 250 km from the state capital.

The silence, that begins every year on Makar Sankranti (January 14/15), continues till the end of the month of ‘Magh’. This year, it will end on February 24.

During this period, the locals also avoid listening to music, watching television or doing the kind of household chores and work in the fields that make noise.

The reason behind the practice is the belief that the Gods – Gautam Rishi, Ved Vyas Rishi and Kanchan Nag, a serpent deity – whose temple is located in Goshal village, four kilometres from upper Manali, are meditating.

Legend has it that the chief deity, Gautam Rishi, meditated where the temple is situated.

It will be reopened when the deities are supposed to return from their winter sojourn. During this period, no religious ceremony is performed in the temple, priest Hari Singh said.

As per tradition, the locals will start their routine activities only when the deities return to the temple and it reopens.

“Every year, on the first day of ‘Magh’, the temple closes after performing rituals, based on the belief that the deities journey to heaven to meditate. They will now return to earth on the ‘Phalguna’ month that falls on February 24,” said Hari Singh.

During the deities’ sojourn away, no one is allowed to make noise which, it is believed, would disturb their meditation and can, therefore, earn their wrath.

Octogenarian local Tikkam Chand, who is settled in Burua village, said that even their ancestors were following this practice of observing silence during the assembly of the deities in heaven.

He said all agricultural works and anything that makes noise are stopped during this period.

Instead, this period witnesses a spurt in other activities in these villages.

The womenfolk gather at one place and devote most of their time stitching clothes and knitting woolens without chatting or listening to music.

“During this period when the entire area is marooned in snow, we prefer to spend most of the time inside our homes. The young family members these days prefer to move to nearby towns like Kullu and Manali for earning livelihood,” Sarita Devi, a mother of two, said.

“Now, only when the ‘devtas’ return to earth and the temple is reopened, will we start our agricultural work,” she added.

Manali and nearby areas are one of state’s major apple growing regions, with more than 90 per cent of the produce being destined for the domestic market.

The apple crop is currently in a dormant state and flowering will begin by end-March.

In line with tradition, the Gautam Rishi temple is closed after spreading earth inside and planting a seed in a pot full of soil kept close to the idol. Locals believe that if a flower has surfaced on the soil when the temple reopens, it is an augury of happiness for villagers in the coming year.

Instead, the appearance of charcoal signifies that the village is in store for some fire-related tragedy. Grain indicates a good harvest.

“When the temple is reopened, a prediction will be made on the basis of the sacred mud spread inside the temple,” the priest said.

The other villages where this tradition is followed include Solang, known for its ski slopes, Kothi, Majhach and Palchan in the Ujhi Valley.

The picturesque Kullu Valley is famous for its ancient shamanistic traditions that govern the lives of the ethnic communities. As per a study conducted, there are the 534 gods and goddesses in the Kullu Valley who are said to be “alive”.

According to “A reference book on Kullu Devtas” compiled by the local administration, the gods “live” among the people. They have families and relatives living among the local people who join them in the celebrations.