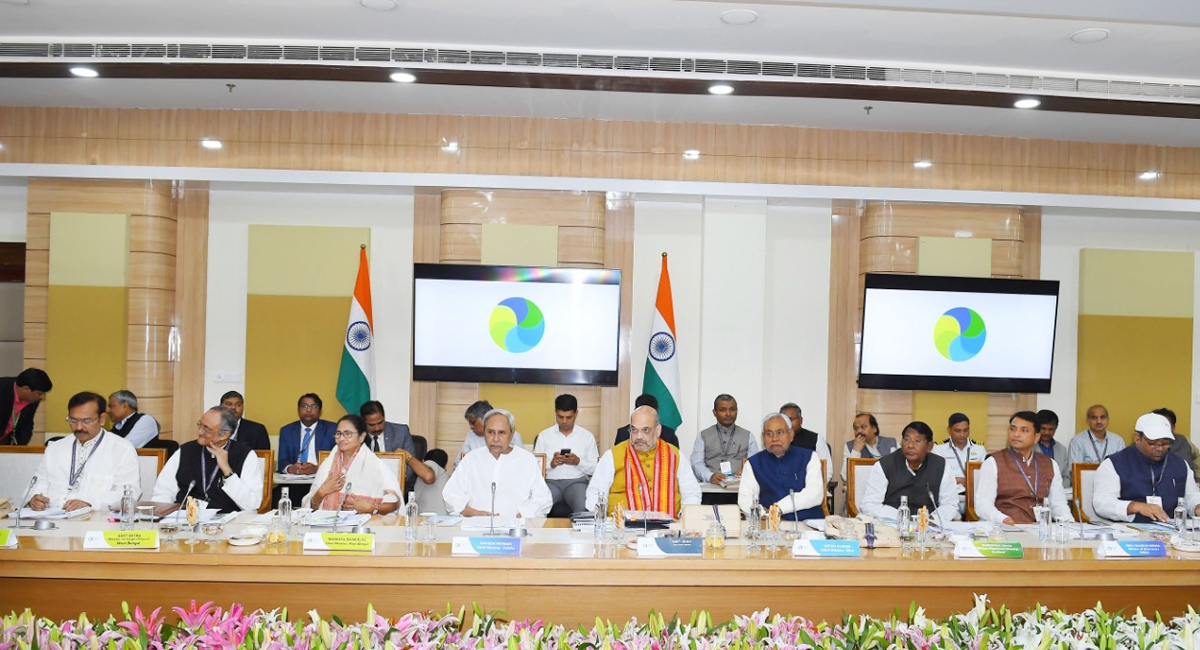 Hard talk on crucial developmental issues was the highlight of the 24th Eastern Zonal Council (EZC) meet held in Bhubaneswar on February 28 in an extremely cordial atmosphere belying fears of tension triggered by the Delhi riots. Violence in the national capital, in fact, found only a fleeting mention with West Bengal Chief Minister Mamata Banerjee expressing regret over the loss of lives and hoping for normality to be restored fast.

Banerjee, who joined Union Home Minister Amit Shah, the man chairing the meeting, for a power lunch at Naveen Niwas along with Bihar Chief Minister Nitish Kumar and Union Minister Dharmendra Pradhan, cautiously desisted from toeing the opposition line on Delhi riots. While appealing for peace in Delhi she made it clear that it was not the time to indulge in politics and demand the resignation of Shah. “The problem should be resolved first. We can discuss politics later,” she said, adding that she had urged Shah to ensure that the situation in Delhi did not aggravate.

Banerjee also made it clear that contentious issues such as Citizenship Amendment Act (CAA) and National Register of Citizens (NRC) were not discussed at the meeting as they were not on the agenda. Shah, though, later tore into the opposition, particularly the Congress, while addressing a pro-CAA rally at the Janata Maidan in Bhubaneswar. He accused the opposition of misleading the people on the issue of CAA and fomenting riots.

Odisha Chief Minister Naveen Patnaik, who played the generous host serving his guests typical Odia delicacies at his official residence, took the initiative in raising the developmental demands of the eastern region at the meeting while also foregrounding Odisha’s specific demands. He sought a special economic package for the eastern zone which, he said, lagged behind in many areas despite being richly endowed with natural and mineral resources.

Patnaik said that the region was underdeveloped in terms of teledensity, railway network as well as banking density compared to other zones, and therefore, deserved a special financial package for infrastructure development. “If a nationwide analysis is done, East Zone will be at the bottom in all these subjects which are in the Union List. There is a need to double the allotments to this region so that they catch up with national benchmarks,” he said.

Talking of integration which is one of the primary objectives of the council, Patnaik said, “Integration has to be financial, infrastructural and technological so that it leads to and strengthens emotional integration.” He also emphasized the need for good Centre-state relations and pointed out that the eastern zone contributed maximum to the mineral wealth of the country and ensured security for manufacturing and energy sectors. He simultaneously underscored the urgent need to ensure that the fruits of this wealth boosted the economic growth of the region.

Patnaik also raised the demand for the revision of coal royalty which has not been revised since 2012 and said there was also an urgent need to review this as well as the share of clean energy cess with the state governments. “Our region has some of the largest scheduled areas of the country. I reiterate my demand for inclusion of Ho, Bhumij and Mundari languages in the Eighth Schedule of Constitution,” he said.

Raising issues specific to Odisha, Patnaik said while he was thankful to the Centre for supporting the state during cyclone Fani last year, the state should be accorded special status. “Taking the frequency of natural disasters faced by Odisha into consideration, vulnerability to natural calamity should be taken as a criteria to declare the state a Special Focus State,” he said. He also pointed out that delay in release of grants to urban local bodies and non-release of subsidy for paddy procurement are causing problems to the farmers of the state.

Patnaik also pointed out that even though the state shared 50 per cent of the estimated cost of railway projects and provided free land for the same, the progress of important projects in this sector had been “very slow”. While Nitish reiterated his demand for special category status to his state, Didi raised the issue of timely payment of GST compensation to states by the Centre. Jharkhand was represented at the meeting by its finance minister, Rameshwar Oraon.

Shah, on his part, reaffirmed the Centre’s commitment to federal democracy and called for resolution of inter-state and Centre-state issues though regular discussion at different fora besides the zonal council meetings. He also spoke of Prime Minister Narendra Modi’s vision for the implementation of consensual decisions taken after deliberation to further strengthen the federal structure of the country. He expressed satisfaction over the usefulness of the zonal council mechanism and said more than 70 per cent issues had been resolved based on the outcome of recent meetings of the zonal councils. He expressed hope that the latest meeting would also be useful in resolving contentious issues having Centre-state and inter-state ramifications.

Admitting that the eastern region required greater attention to fast-track its development, the Home Minister said he hoped that the meeting would impart momentum to the process of development in the country as a whole. Sources said, apart from telecom and banking density, the council also discussed issues such as prevention of cattle smuggling and illegal transportation of cattle to Indo-Bangladesh border.

While Banerjee raised the issue of delay in payments of GST proceeds and devolution of funds her Bihar counterpart demanded formulation of National Silt Management Policy to take care of floods in river Ganga.

The power lunch hosted by Patnaik for the visiting dignitaries was the talk of political circles as it brought together leaders who do not see eye-to-eye on several issues. Shah and Banerjee, who have crossed swords several times in the past, sat facing each other as lunch was served to the guests.

Later in the day, Shah addressed a pro-CAA rally organised by the BJP where he lambasted the Congress-led opposition for spreading lies about the new law and fomenting trouble in the country. Addressing his first public meeting since riots broke in Delhi the home minister said: “They (opposition) are misleading the people, they are instigating them and fomenting riots. They are saying that CAA will take away the citizenship rights of Muslims and minorities. I want to assure that minorities that it will not take away their rights. CAA is meant to confer citizenship rights, not take them away.” He also sought the cooperation of Patnaik in implementing central schemes in the state and called up his party cadres to gear up for taking one “big jump” to power in the state in 2024.