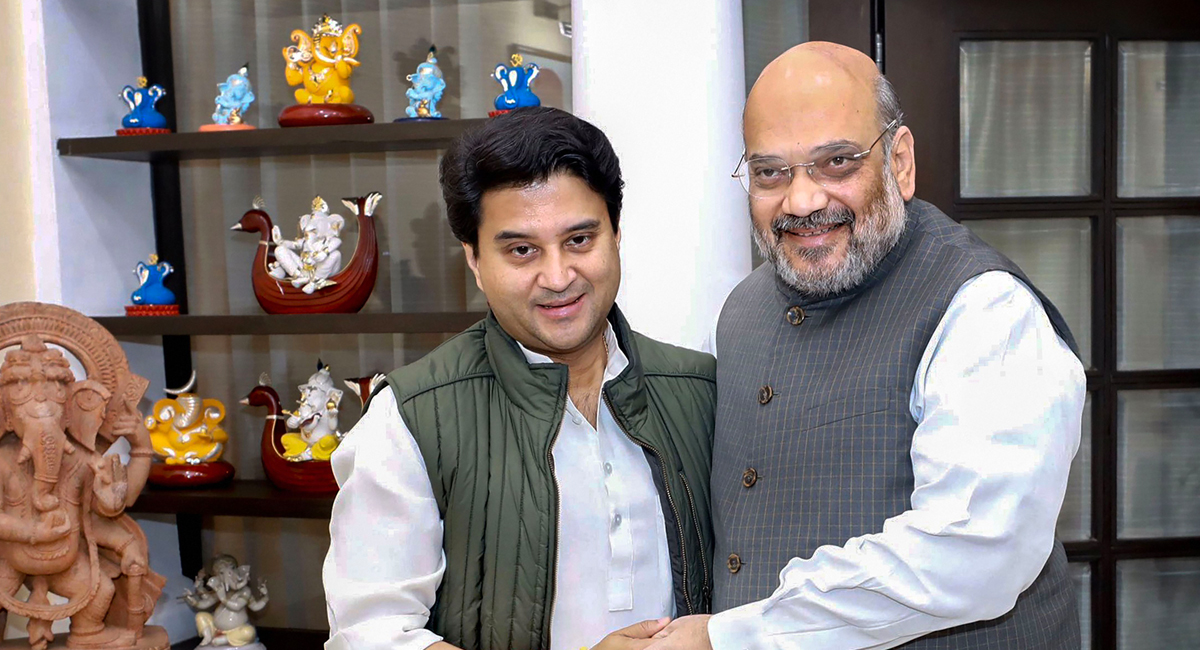 History has a way of repeating itself. Back in 1967, the Indian National Congress had won the elections and come to power in Madhya Pradesh with D.P. Mishra as the Chief Minister. However, when Rajmata Vijaya Raje Scindia got upset with Mishra over a student movement in Gwalior, she quit the party, following which three dozen Congress MLAs followed suit and joined the opposition, which led to Mishra’s resignation as his government lost its majority in the House. Not long after that, Rajmata Scindia joined the Jana Sangh and went on to become a founding member of the Bharatiya Janata Party.

Fifty-three years later, her grandson Jyotiraditya Scindia has parted ways with the Congress, after which nearly two dozen MLAs supporting him have tendered their resignation to the Kamal Nath government. Once those are accepted, the Congress will lose the wafer-thin majority in the state assembly and Nath may be left with no other option than to leave the chief minister’s chair. In the meantime, Jyotiraditya, after being an integral part of the Congress for 18 years, has joined the BJP.

This time, however, the ramifications of this development, which has once again put Madhya Pradesh in the midst of a constitutional crisis, might be far graver than what they were half a century ago. On the one hand, Congress is neither the most dominant political party in the country (far from it), nor does it seem have a leader who can make it one again anytime soon. And on the other hand, the BJP has gone from strength to strength to become the top national party and ruling from the Centre under the leadership of popular Prime Minister Narendra Modi.

Many political experts are of the view that, irrespective of what happens to the Kamal Nath government, the circumstances leading to the former Guna MP’s resignation are telling signs of the deep crisis in Congress.

In his resignation letter to Congress president Sonia Gandhi, Jyotiraditya wrote: “As you well know this is a path that has been drawing itself out over the last year … While my aim and purpose remains the same as it has always been from the very beginning, to serve the people of my state and my country, I believe I am unable to do this anymore within this party.”

According to sources close to this development, Jyotiraditya’s resignation was triggered by the Congress high command’s non-committal stance on giving him the priority for a Rajya Sabha seat from MP ahead of the upcoming elections to the Upper House on March 26 (necessitated by retirement of current members). This happened, they said, thanks in no small part to the pressure tactics of party veterans Kamal Nath and Digvijaya Singh, who are believed to have a shared interest in launching their respective sons’ political careers. Singh is even alleged to have ensured that Jyotiraditya did not get to meet with Mrs Gandhi to discuss the matter.

That must have been the last straw for the 49-year-old politician, who is believed by his sizeable number of supporters to have been unfairly sidelined since last year’s elections.

It is no secret that Jyotiraditya’s extensive and inspired campaigning across MP had played a pivotal role in getting Congress a victory there in the 2019 assembly elections. Although he was widely expected to finally become the Chief Minister of the state, it was Kamal Nath who pipped him to the top post thanks to the blessings of the party leadership. Similarly, the Scindia scion was denied the post of Pradesh Congress Committee chief due to resistance from Kamal Nath-Digvijaya Singh camp.

A day after quitting Congress, which was the day that he formally joined the BJP, the man himself elaborated on the main reasons behind his decision.

The first reason that he cited was that the Congress party neither encouraged new leadership nor acknowledged the problem at hand – making a not-so-subtle reference to the party old guards Digvijay Singh and Kamal Nath.

The second reason, he noted, was widespread corruption in the state.

“Transfer industry is flourishing in Madhya Pradesh, where we had a dream after coming to power. Eighteen months on, that dream lies shattered, whether it was about waiving farmers’ loans or compensating farmers for the crop damaged due to natural reasons. Hundreds of farmers continue to face various court cases in Mandsaur,” he said at a press conference where BJP chief J.P. Nadda was also present.

And the third was the “able leadership” of Prime Minister Modi. “India’s safety and security is safe in Modi-ji’s leadership,” he said.

However, the overarching theme of the points made by Gwalior’s erstwhile royal was that Congress was no longer what it used to be.

That notion seems to be in agreement with many political watchers who have been pointing to a battle of survival and identity within the Congress leadership where the veteran leaders are at odds with the younger lot over their respective interests, ideologies and vision for the party.

“The fight between the young and the old guard was quiet clear in the Congress for long,” said a senior Congress leader who did not wish not to be named. He also admitted that Mrs Gandhi’s return as the acting president of the party strengthened the clout of the old guard and undermined that of the young leaders.

Citing the classic examples of Madhya Pradesh and Rajasthan, he said that when the Congress won in the two states, both Jyotiraditya and Sachin Pilot were expecting the chief ministerial post in their respective states as Rahul Gandhi was the party chief then. “With the selection of Kamal Nath in Madhya Pradesh and Ashok Gehlot in Rajasthan, the young leaders felt sidelined,” he said.

Another senior Congress leader stated on the condition of anonymity that things have gotten increasingly hopeless by the day for most young leaders since Rahul Gandhi’s resignation from the party president’s post.

“Month after month it became tough for Scindia to face the neglect in the party,” he revealed, noting that Jyotiraditya’s support for the revocation of Articles 370 and 35A from Jammu and Kashmir was an early indication of his state of mind.

And when Kamal Nath openly paid no heed to Jyotiraditya’s warning about taking to the streets if the state government failed to implement its election manifesto promises, that must have been “the final nail in the coffin”.

Meanwhile, a veteran BJP leader close the development revealed that his party understood the nature of Jyotiraditya’s predicament and had been planning to bring him into the BJP fold since three months ago.

Not long after Jyotiraditya’s switch, Kuldeep Bishnoi, son of former Haryana Chief Minister Bhajan Lal and a Congress MLA from Adampur in the state, tweeted: “India’s oldest party needs to empower young leaders who have the capacity to work hard & resonate with the masses.”

“@JM_Scindia’s departure is a big blow to @INCIndia. He was a central pillar in the party & the leadership should’ve done more to convince him to stay,” he said.

“Like him, there are many other devoted INC leaders across the country who feel alienated, wasted & discontented,” added the MLA who himself has not been on good terms with former Haryana Chief Minister and Congress veteran Bhupinder Singh Hooda.

Bishnoi’s concerns and frustration is shared by many young leaders in the Congress, who admit in private that they feel neglected and alienated in the party.

Some cited Rajasthan Deputy Chief Minister Sachin Pilot as yet another glaring example and pointed to the way he was being pushed by Chief Minister Ashok Gehlot to relinquish the state President’s post.

Another Congress leader, Sandeep Dikshit, son of former Delhi Chief Minister Sheila Dikshit, is also reportedly upset with the party after being kept out of the recent Delhi Assembly polls. He was recently quoted as saying that “extraordinary situation demands extraordinary actions”, before adding that Congress was paying a heavy price owing to the uncertainty over its leadership and that it was high time for party seniors to take the responsibility of electing a new President.

Down in Karnataka, it is common knowledge that the internal rift between Congress and Janata Dal (Secular) was as responsible as BJP’s political engineering for the fall of the Kumaraswamy government. Former Congress chief minister Siddaramaiah was widely held responsible for the coalition government’s downfall.

Many political observers have also reckoned the Congress’ response to Jyotiraditya’s resignation to be a telltale sign of a flailing leadership.

On March 10, K.C. Venugopal, General Secretary of the Congress, issued a short statement that read: “Congress President has approved the expulsion of Sh. Jyotiraditya Scindia from the Indian National Congress with immediate effect for anti-party activities.”

This statement arrived after Jyotiraditya had tweeted out his resignation letter, dated March 9, to Mrs Gandhi.

This prompted a sharp jab from BJP’s Amit Malviya, who asked: “How can you expel a person who has already resigned?”

Then came the response of Rahul Gandhi, of whom Jyotiraditya was arguably the closest associate withing the party.

“He was the only one who could walk into my house anytime,” the former Congress president said, seeking to dispel the notion that Jyotiraditya’s inability to meet with the Gandhis had been one of the triggers behind his departure.

The Gandhi scion also retweeted a post from December 13, 2018, which shows him flanked by Kamal Nath and Jyotiraditya, and used a Leo Tolstoy’s famous quote, ‘The two most powerful warriors are patience and time.’

While the retweet was supposed to reiterate to his one-time trusted lieutenant that he should have waited longer to get his due, it was all too little too late.

Many political analysts have begun deeming Jyotiraditya’s departure as the beginning of a ripple effect that may snowball into an existentially threatening crisis for Congress in the not-too-distant future. They say the party must change its ways, if not its leadership, in good time if it wants to avoid becoming history.