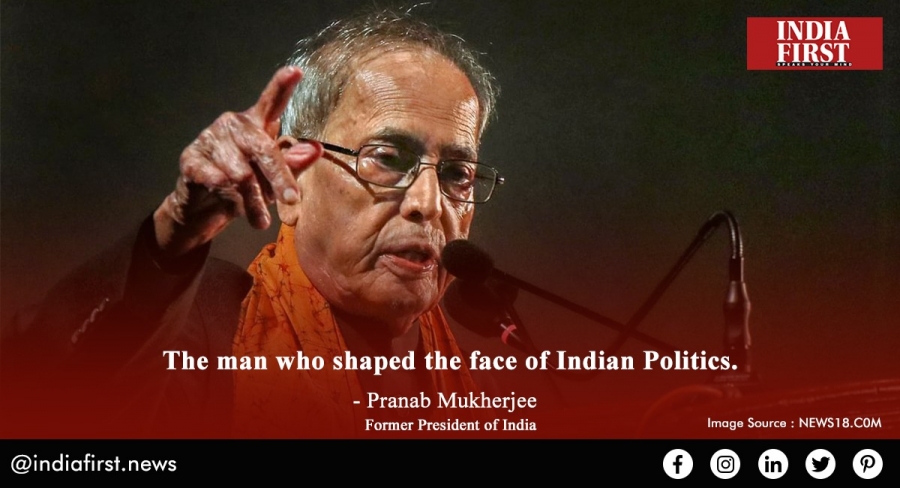 Deemed as a man for all seasons in politics, former president Pranab Mukherjee passed away on August 31, 2020.  He was struggling with a COVID-19-induced lung infection for quite some time. India First documents the career highlights of a politician whose legacy will continue forever.

In the long line of remarkable Indian politicians, very few have achieved the feats Dr Pranab Mukherjee did in his political career of five decades. From a lecturer of political science at Vidyanagar College, Kolkata, to the 13th President of India, his illustrious career has seen Indian politics undergo major changes from the 1970s to 2020.

Mukherjee dived into politics in the year 1969 and spearheaded the election campaign of an independent candidate, V.K. Krishna Menon. Indira Gandhi, who was the Prime Minister of India at that time, recognized his talents and approached him with an offer of joining Congress. He readily accepted it.  The same year he became an honorable member of the Rajya Sabha. He was reelected to the upper house four more times.

In 1984, after Prime Minister Indira Gandhi was assassinated, Mukherjee parted ways with Rajiv Gandhi’s Congress. He stayed away from the Congress’s ranks for the next five years. During that period he formed his own party, the Rashtriya Samajwadi Congress. In 1989, this party merged with Congress when issues between him and Rajiv Gandhi were resolved. After the assassination of Rajiv Gandhi, he served as the Deputy Chairman of the Indian Planning Commission in the PV Narasimha Rao government. Dr Mukherjee then assumed the role of the External Affairs Minister in the Cabinet.

In 2004, Mukherjee was elected the leader of Lok Sabha. For the next six years he would head 95 Groups of Ministers (GoMs). He was the only politician and president to chair three top ministries of the Government— external affairs, defence and finance. His political acumen and encyclopedic knowledge on the subject earned him the tag of troubleshooter for the Congress. He brought about many reforms and crucial decisions in Indian politics in his active years. In the 1980s, he supported liberalization and brought about crucial reforms in the Indian economy.  He was pivotal in securing the Indo- US nuclear deal smoothly for the UPA alliance. His deep knowledge in politics and governance made him a dependable friend for politicians and bureaucrats alike. This resourcefulness brought about the amendment of India’s Income Tax Act.  A voracious reader and a sharp mind reflected on his insightful personality. His insights on people, education, politics and finance solidified many reformist ideas into decisions.

His dignified demeanor and wisdom earned him allies across party cadres. This ubiquitous respect earned him the highest office of India in 2012. Sworn in as the 12th President of India, his humble origins made him the people’s president. He supported the decisions for people welfare and empowerment that were taken by the BJP government even though his political roots were in Congress. As a politician, India always came first. Pranab Mukherjee was a strong abider of Constitution and the rule of Law, never passing bills, amendments that could not be founded on the fundamentals of Constitution. A man blessed with photographic memory, he had a fine taste for the finer print.  This quality made him the go-to leader for any advice or guidance on political decisions.

From running crucial electoral campaigns, to ushering in liberalization in India, to shaping Indo-US diplomatic relations – Mukherjee’s five-decade long career was eventful to say the least. His legacy in politics will be remembered and studied for years to come.