LGBTQ cell in NCP: Pinkwashing or For the Right Reasons? | India First e Newspaper Skip to navigation Skip to content 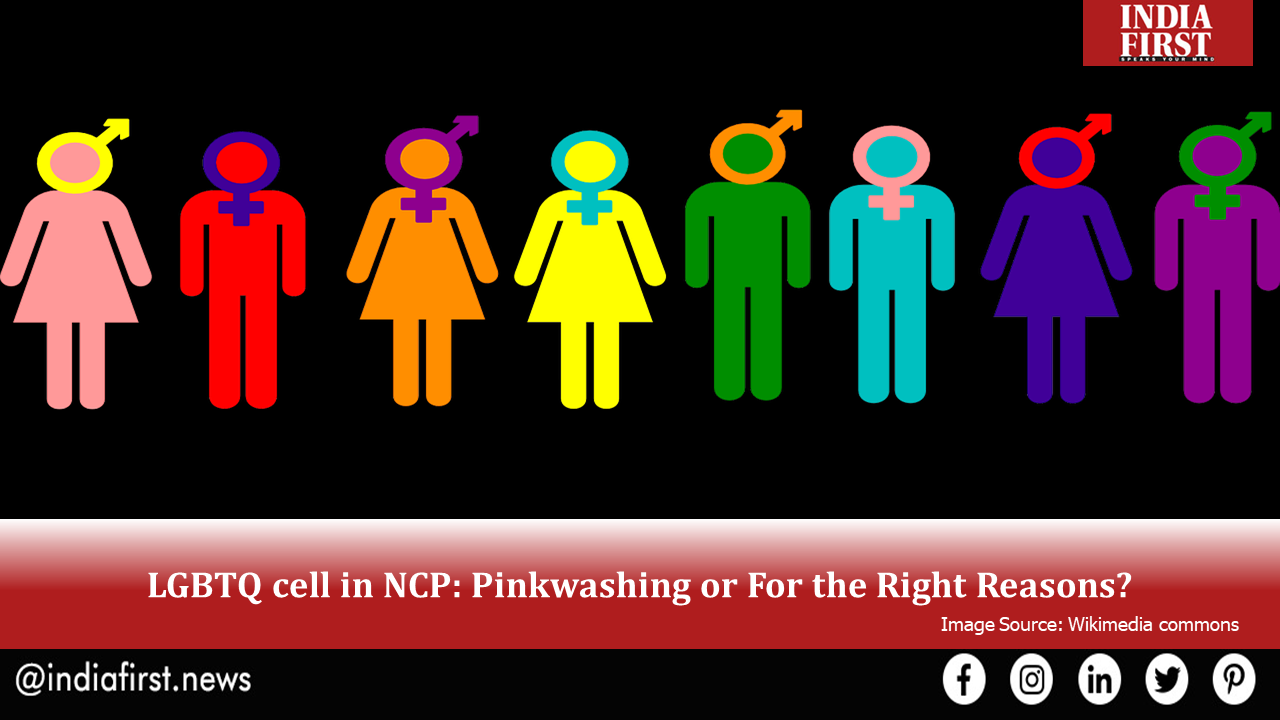 As a historical decision towards giving equal rights and representation to the LGBTQ community in politics, the National Congress Party has decided to have an LGBTQ cell, a first for any political party in the nation.

Announced by the party’s leader, Supriya Sule, the LGBTQ cell aims at bringing the people of the LGBTQ community to the political mainstream and giving them a voice in the country’s politics. The cell will aim at eliminating prejudice and stereotypes against the LGBTQ community and it will work towards removing homophobia and transphobia in the society.

Establishing an LGBTQ cell and working for the welfare and upliftment of the LGBTQ community is seen as an inclusive and liberal stance that can garner much needed support for The NCP across many sections of the society. Therefore, parties across the world have created an LGBTQ cell to get the support of the LGBTQ community and other people who support it. Although necessary, the LGBTQ cell is often seen as a political move to get more votes rather than to actually help the community. The cell in NCP is also being judged as a political gimmick by many political critics.

A 2018 ruling by the Supreme Court has decriminalized homosexuality which is a great step towards equal rights for the LGBTQ community. Yet, equal rights for the LGBTQ community are far from achieved as the prejudice against the LGBTQ community is deeply entrenched in the Indian mindset. The community has always been marginalized and left to fend for its own needs. Its members live in closely knit communities and ghettos in order to survive. The stigma around homosexuality in India has resulted in discrimination against the community, which lacks equal access to socio-economic, educational and cultural opportunities and whose members are often judged as disputed citizens as the third gender is not recognized at the ground level in India.

While the Supreme Court and the Constitution have given recognition to the LGBTQ community as the third gender, granting them the right to vote and the same fundamental rights as any other Indian citizen, the provisions for equality are still limited to paper. The mindset regarding homosexuality is slowly changing, with people treating homosexuality and gender fluidity with more acceptance – but the LGBTQ community has to see two starkly contrasting faces of the society: one that discriminates openly against them, calling them names and committing crimes against them; the other that is slowly accepting them as humans and citizens of India.

The LGBTQ cell in NCP is a good initiative that should enhance the community’s participation in the country’s politics, but the party has to take steps to ensure that the cell’s function is not limited to paper. The party has to get the representation of the LGBTQ community in the right way. The cell is headed by a cis woman currently, and while straight men and women may be aware of the issues the LGBTQ community faces, the cell needs strong representation and leaders from the community itself who have seen the ground reality and worked closely with other LGBTQ members.

The difference between pinkwashing and an actual movement for the betterment of the LGBTQ community will be decided by the way it is represented in the cell.