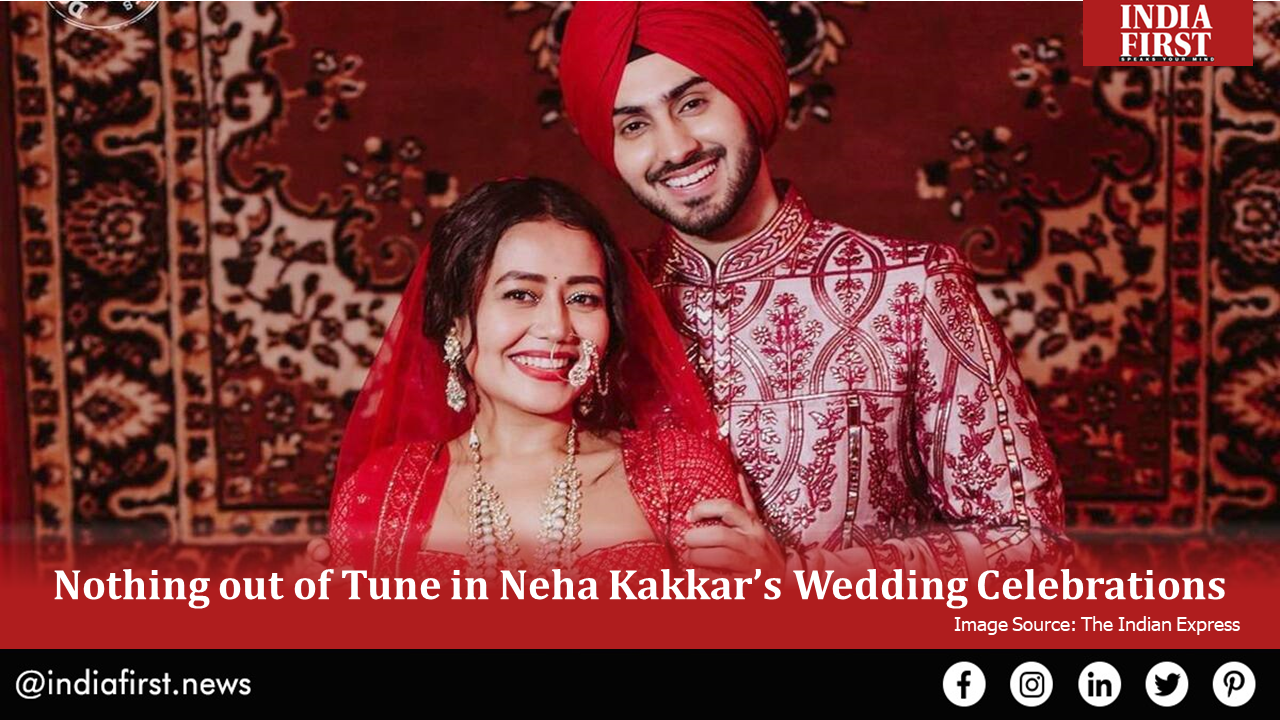 Bollywood’s popular singer and performer Neha Kakkar has recently tied the knot with Punjabi singer and beau Rohanpreet Singh in a grand wedding whose celebrations lasted for days.

The singer couple who met on the sets of Nehu Da Vyaah and fell in love while shooting the song had made their relationship official on Instagram earlier this month by posting the same photo in both of their official handles. Following the declaration of love, Rohanpreet had proposed to the popular singer and an October wedding was finalised. Amid the festivities the couple have taken to social media sharing some of their romantic moments, such as when Rohanpreet took Neha to meet his parents.

The couple has been quite active on social media of late, sharing photos of each other and mentioning each other on their Instagram stories. The internet has been lapping up these warm moments between the lovebirds and is flooded with the insider photos of their wedding festivities.

The celebrations of #Nehupreet started with their Roka ceremony, a north Indian initiation ceremony where the bride is promised to the groom. Both looked resplendent in matching pink outfits and made their entry on the beats of dhol and had a blast with close family members.

The mehndi and haldi ceremonies of the pre-wedding rituals were held on October 23. Both Kakkar and Singh posed for couple photos in matching outfits as wishes and compliments poured in from fans all over the world. The couple got hitched in a traditional Anand Karaj ceremony in Delhi in the presence of close friends and family.

Many guests from the entertainment industry also graced the occasion. The couple looked every bit the royal bride and groom in pastel shades. Kakkar was radiant and blushing in a floral inspired bridal outfit and makeup. Singh complimented her very well and the newlywed made quite a picture.

Following the sober gurudwara ceremony of Anand Karaj, the couple threw a grand reception party where the Varmala ceremony was held. The couple looked gorgeous in red outfits from the Falguni Shane Peacock label. The couple evoked relationship goals when they crooned love songs for each other and danced together on hit party numbers, letting their hair down following a formal wedding ceremony.

They had a grand entry with Neha arriving on a huge chariot dressed in the Falguni Shane Peacock lehenga and a long red veil over her face, looking every bit the new bride. The reception party had many celebrities in attendance and the couple was seen enjoying their heart out with family and friends.

Following their wedding festivities in Delhi, the couple travelled to Chandigarh to host a second reception on Monday for Rohan’s family and friends in Punjab. The bride looked like a white angel dressed in a silver white lehenga and diamond and emerald jewellery. The groom also looked dashing in a royal blue suit piece.

Interestingly, both the celebrity singers shot to fame from reality show platforms. Their first collaboration Nehu Da Vyaah was released in tandem with their wedding rituals and their fans look forward to seeing more collaborations of the duo.