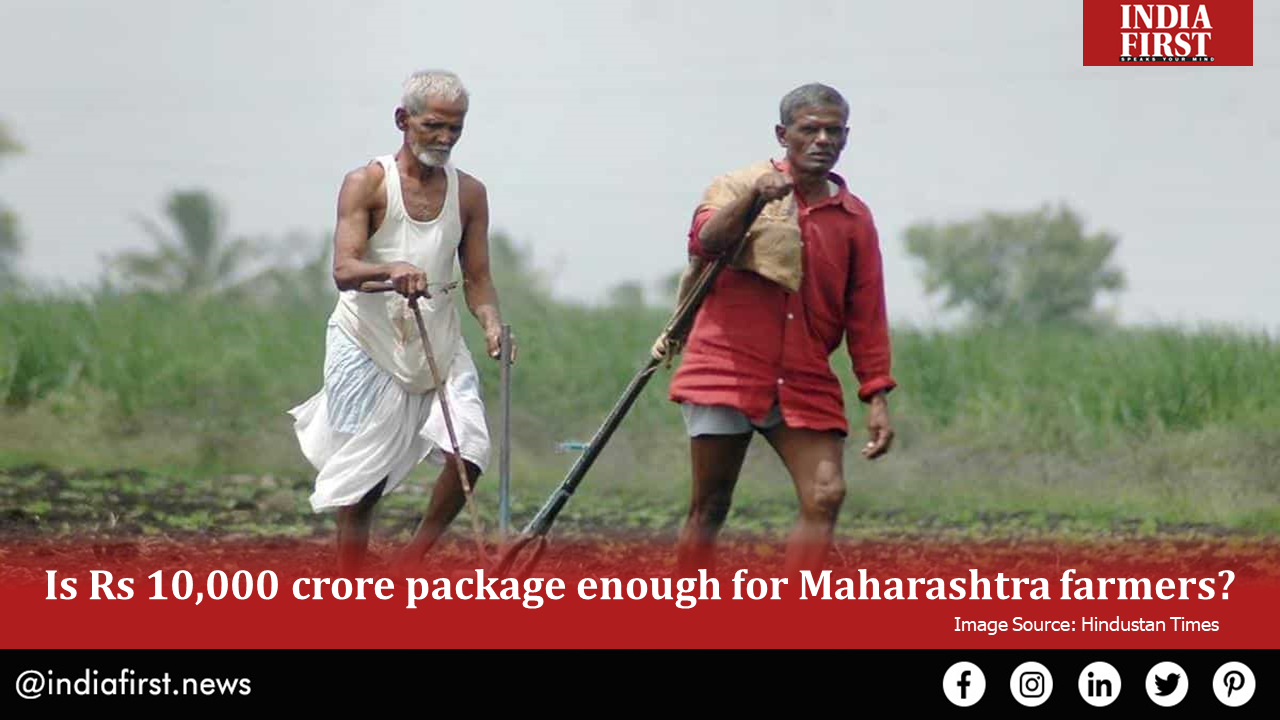 Following flood-like situations in the southwestern belt and waterlogging in many districts of Maharashtra, the state government has announced a relief package worth Rs 10,000 crore for farmers facing financial woes.

The floods in the state have not only claimed numerous lives in the districts of Pune, Aurangabad, Solapur and Latur but has also caused extensive damage to the farmlands and crops in the region. Over 7 lakh hectares of farming land have been affected by the floods and tonnes of harvest-ready crops have been damaged by the floods. The state is facing loss of soyabean, sugarcane and cotton crops due to waterlogging in farmlands.

Among the worst affected districts are Solapur and Osmanabad. The floods have added salt to the wounds that the Konkan belt had suffered in June 2020 from the lashes of Cyclone Nisarga. The farmers of Maharashtra were already suffering from the cyclone’s impact on the harvest, but their financial losses stand aggravated in the post-flood situation.

The state of Maharashtra had already requested the Centre to release relief packages for the farmers of the state. A massive relief package is needed to rescue farmers from their financial woes this year and the 10,000-crore package recently announced by Uddhav Thackeray’s government fails to cut it for the farmers.

Even the Maharashtra CM understands the gravity of the situation and has admitted that the state government would have released a greater amount as assistance to the farmers if the COVID-19 pandemic had not burdened the state’s economy already. The state is also one of the worst affected regions of India, as evident in the tally of COVID-19 cases reported there. The state’s economy is already ailing and the October floods have only increased the financial burden on the state.

In midst of such challenging circumstances, the Uddhav Thackerey government has blamed the central government for its failure to announce a bigger relief package as the state is yet to receive the promised Rs 38,000 crore compensation towards the Goods and Services Tax. The centre, on the other hand, has borrowed Rs 1.1 lakh crore recently to meet the monetary compensation to be given to the states to make up for the shortfall in GST. The compensation is expected to be released soon. Once released, the Rs 38,000 crore compensation can infuse new life into Maharashtra’s economy and help in mobilising relief to the flood-affected areas.

The Rs 10,000-crore relief package is distributed across the most pressing issues of the flood-affected areas. Out of the Rs 10,000 crores, Rs 5,500 crore will be used to give financial help to farmers so they can recover the crop losses caused by the floods and are able to reinvest in farming in the next agricultural season. While
Rs 2,365 crore is allocated for repairing damaged roads to restore mobility and economic activity, Rs 1,000 crore has been set aside for  rural welfare and amenities in rural communities.

Given the scale of damage and financial burden on the people, the Rs 10,000 crore package can only be the first step to soothe the public’s financial wounds but it needs to be supported by newer packages and assistance from the government’s side.