Despite His Troubled Life, Maradona’s Legend Will Live on Forever | India First e Newspaper Skip to navigation Skip to content 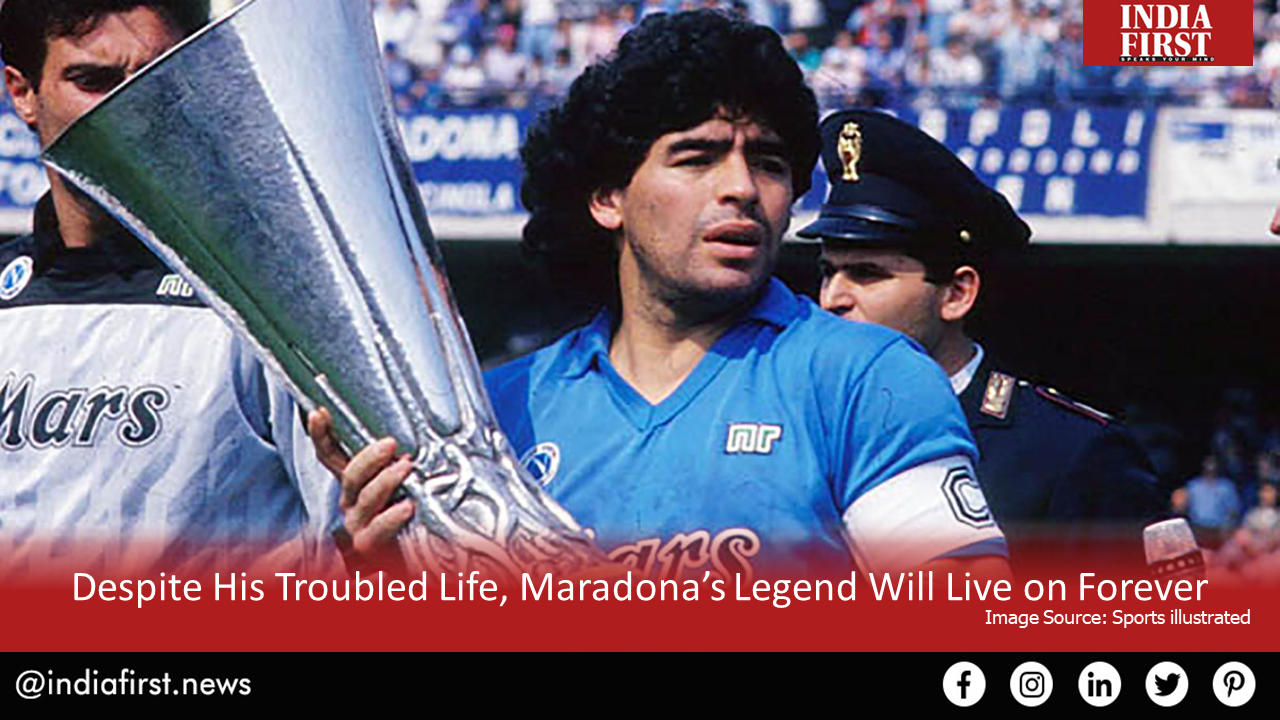 Football lost one of its brightest stars ever, if not the brightest, when Diego Maradona died of cardiac arrest on the night of November 25. The legendary footballer had only undergone a major surgery a few weeks ago to remove a blood clot from his brain, after which he faced the consequences of the complications of his condition. Maradona, who was believed to have magical playmaking abilities – as he could make the ball find the goalpost in a manner that no other player ever could – was seen as the god of football by his fans around the world.

He had always been a survivor, rising to national and international fame from his humble background and then later in life fighting against an array of diseases and health conditions over the span of past 30 years.

Maradona and his legacy will live on in his achievements that propelled Argentina into dizzying heights of international football fame and brought glory to his home team. He led the 1986 Argentina football team to world cup triumph and won multiple league championships for his team to earn his iconic international status. Maradona was known for his seemingly easy style of playing that made impossible feats possible and inspired future generations of professional footballers.

Unfortunately, though, Maradona was struggling with the pressures of fame from an early phase of his career and took to drugs to cope with it. His lavish lifestyle and indulgence led to a decline in his career in the 1990s and the Aregentinian prematurely retired from international football in 1997 after being involved in a drug scandal in 1991.

Following his retirement, he continued to struggle with health issues such as gastric disorders, weight issues and heart complications that stemmed from a chronic cocaine addiction, among other things. Even after doctors had declared that Maradona’s heart was functioning at only 40% efficiency and the footballer was advised not to exert himself too much, he scripted a comeback to football with sheer will power as the coach of the Argentina national team in the 2010 World Cup. Even though the team could not take the World Cup home, Maradona grabbed much limelight with his coaching and on-field appearance.

His death came as a sad shock even though the 60-year-old had many trysts with life-threatening circumstances. He had survived drowning in a pit as a child. He had lived through many major surgeries but still went on to celebrate many birthdays with gusto. Those who knew Maradona knew him as a small giant who flirted with death and lived through hell with a smile.

Although the legend finally succumbed to his ailments, his superhuman legacy will continue to be celebrated by footballers and football fans around the world.