Tenet: Another Nolan Masterpiece, but Not for Everyone | India First e Newspaper Skip to navigation Skip to content 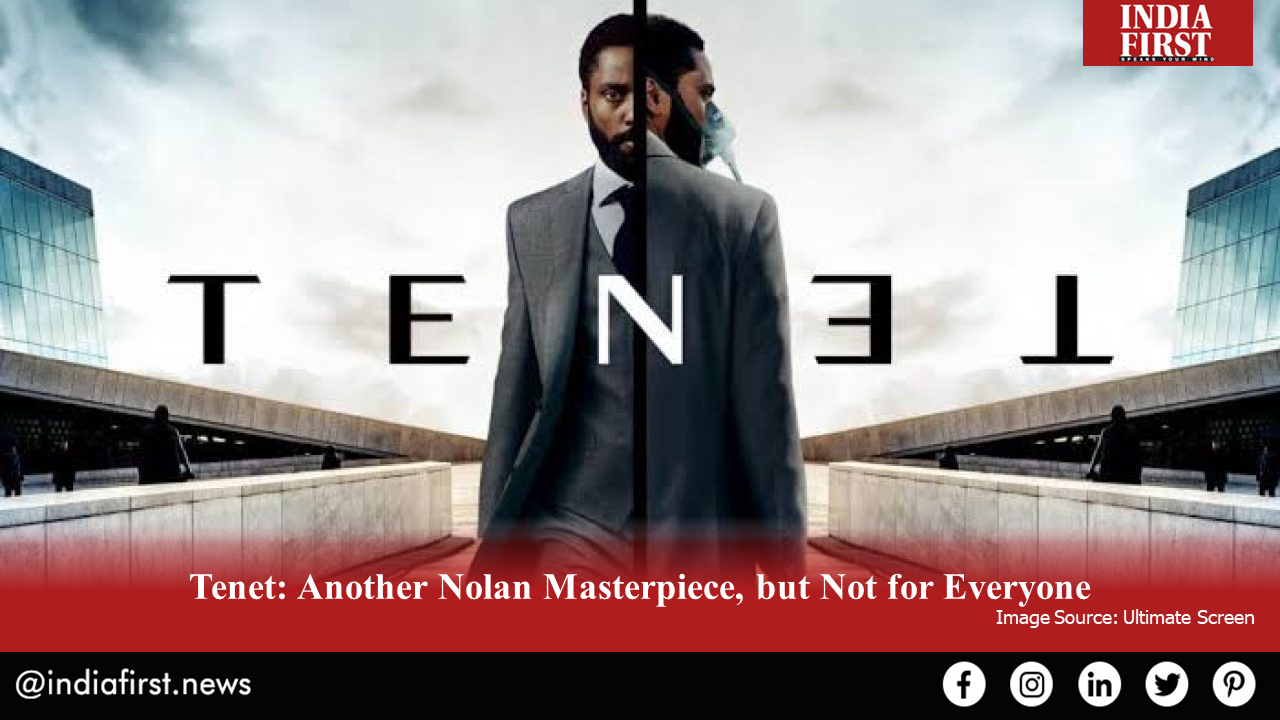 Ace filmmaker Christopher Nolan’s new offering, ‘Tenet’, had been one of the most eagerly awaited films of this year. Following its December 4 release in India, the movie has been appreciated by certain sections of the audience but received an underwhelming response in other markets. Seen as a movie ahead of its time by some movie critics and viewers, Tenet is a time-bending thriller that piques the curiosity of viewers with its eccentric imageries and weird storyline. Nolan’s latest has come after a long gap, given his previous one – ‘Dunkirk’ – was released in 2017.

Written and directed by Nolan, and a collaboration between his production company Syncopy and Warner Bros, Tenet introduces John David Washington as the leading man – but it also includes Robert Pattinson, Elizabeth Debicki, Dimple Kapadia and Kenneth Branagh in supporting roles.

The story of Tenet revolves around the manipulation of time to change the timeline of the story.

The film follows the lead character as he goes on a journey back in time to stop some world events after he discovers an unfired bullet. Adept at the art of time manipulation, having learnt it from a scientist (Clemence Poesy), the Protagonist (Washington) is strong and skilled in hand-to-hand combat, akin to an experienced army officer. He teams up with Neil (Pattinson) in his mission, and what follows is a story of mystery and discovery seen from their point of view.

Neil assists the Protagonist in his mission and has his own set of skills and abilities that make the two a great team on mission. Their mission takes them across many parts of the world – from India to Russia to London – and they meet interesting characters along the way.

Nolan is great at telling intriguing tales of science and space – and just like ‘Interstellar’, Tenet does not disappoint those who have a taste for surreal films that leave the viewer pondering about the intricacies of the story later. It is reported that Nolan had been working on the story and concept of Tenet for more than a decade. The final product does reflect the thought that has been put into it. With its detailed cinematography and scenes, Nolan’s grand vision – often termed as futuristic and intellectual – is in evidence aplenty.

The jaw-dropping action and the fast-paced narration of the story instils a feeling of thrill in the audience and firmly places Tenet among the finest sci-fi thrillers to be released in recent years. Overall, Tenet is an amalgamation of the mystery and appeal of legendary spy James Bond and the weird but magical world of Alice in Wonderland, which never fails to amaze the audience.

If there is a downside (if it can be called so) to Tenet, it is its mindboggling storyline, which may demand a revisit of its scenes for a better understanding of the story.