Will Pfizer Get Nod for Emergency Use of its Vaccine in India? | India First e Newspaper Skip to navigation Skip to content 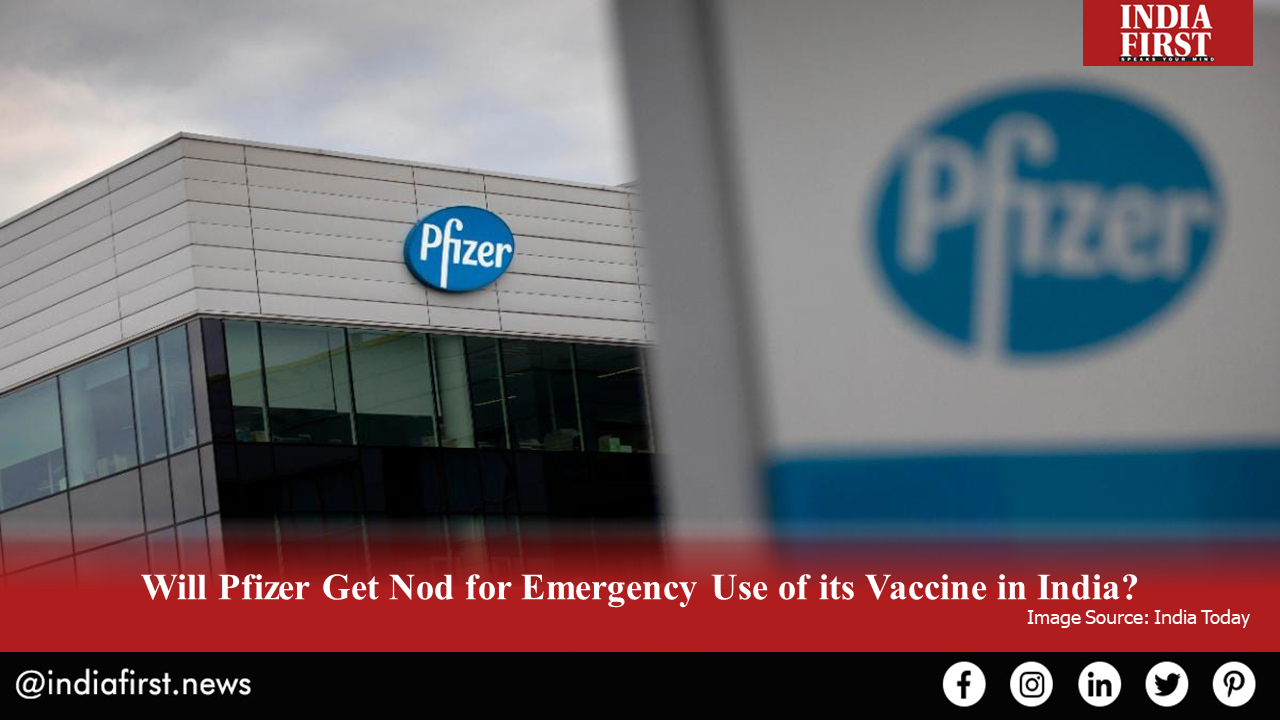 After making tremendous progress on developing a COVID-19 vaccine, pharmaceuticals giant Pfizer is keen to make its vaccine available in India and the US-based company has said that it has begun serious talks with the Government of India to make mass distribution of the vaccine possible for people across the country.

An American-German collaboration, the Pfizer vaccine has been developed in partnership with BioNTech and is supposed to have an efficacy rate of 95% against the COVID-19 virus.

The deadly virus uses certain proteins to enter a patient’s body, which are an expression of its genotypic makeup. Pfizer targets these genotypic characteristics of the virus that help in developing the spike protein used to enter a host cell to start the infection cycle. The Pfizer vaccine is made up of an mRNA molecule which is suspended in lipid molecules for better isolation and efficiency as a vaccine.

After it announced about its talks with the Indian government, Pfizer India has become the first pharmaceutical drug research organization to file for an emergency-use authorisation from the Drugs Controller General of India for the vaccine, after it successfully secured authorisation in Britain and Bahrain.

The UK left other countries of the world behind in the race to initiate vaccination drives against coronavirus by becoming the first to grant permission for temporary use of Pfizer vaccine for emergency purposes. This was also the first ever emergency authorisation of Pfizer’s COVID-19 vaccine after successful rounds of phase 3 trials made it fit for use and mass distribution.

Following its successful trials and authorisation in Britain, Pfizer now aims to get authorisations from other countries of the world, and India seems to be on top of that list. The company has said that it recognises the urgency of the vaccine’s development and availability, so it will deem efforts towards getting authorisation for the vaccine’s use as an emergency too.

In its application for permission to the DCGI, dated December 4, the company sought permission to become an authorised seller and distributor of the vaccine in India. The company also requested permission to forego the need to hold clinical trials in India. The BNT162b2 is being planned to be distributed exclusively through government channels, after proper authorisation agreements with the appropriate regulatory bodies, once the DCGI formally approves its application.

On the domestic front, India has already started testing its indigenously made vaccine, COVISHIELD at the Serum Institute of India. The SII has been holding phase 3 trial of the vaccine for quite some time. According to Adar Poonawalla, the CEO of SII, the institute will be rolling out nearly 100 million doses of the COVISHIELD vaccine by next month.

With such developments on the home front, it is still not known whether the DCGI will give the green light to Pfizer for the mass distribution of BNT162b2. Given that the head of the national task force on coronavirus had earlier said that it might take some months to bring Pfizer vaccine to India, the topic of its authorisation for emergency use in India remains in question.