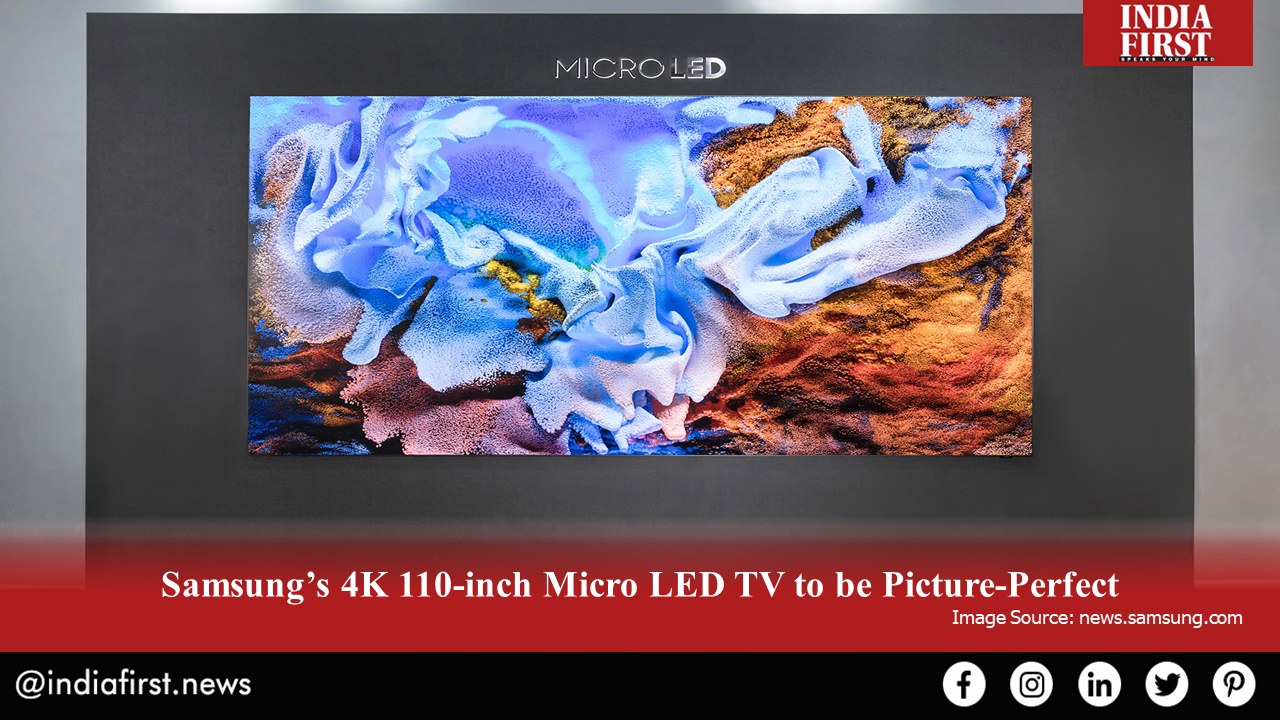 South Korean technology giant Samsung has unveiled at home its latest 4K 110-inch Micro LED TV, which is all set to hit the global markets in the first quarter of next year.

The 4K HDR LED television is supposed to have self-emissive LED technology that will give users an immersive and vivid viewing experience by bringing colours and pictures to life like never before in a living room.

This is not the first time that Samsung has come up with its own Micro LED technology-empowered TV as it launched its modular TV “the Wall” in 2018. However, this is the first time that the Micro LED TV is coming as one unit in contrast with previous TVs which needed assembling before being mounted for use.

The new model will save users the trouble of assembling and will make the installation process more streamlined, increasing the TV’s functionality and connectivity.

While launching the new TV set, Samsung said the new 110-inch micro-LED TV from Samsung has been made keeping the needs of today’s consumers in mind, which are no longer simply limited to viewing but also encompass other smart services provided by a TV.

The micro-LED display conveys 100 percent of DCI to produce wide colour gamut pictures which contribute to a vivid viewing experience, appealing to the viewer’s sight. The display has 4K resolution and 8 million pixels, which means that every picture is seen in great detail and clarity that can only be seen with the new 4K 110-inch Micro-LED offering from Samsung.

With its self-illuminating feature, the Micro-LED TV will produce the perfect contrasts. The Micro-LED TV also has the advantage of being durable and without the risk of burnout in the long run. With the new 4K Micro LED screen, viewers can now indulge in long hours of binge-watching without worrying about damaging the TV.

The new 110-inch Micro LED TV comes with a lifespan of 100,000 hours, which translates into a lifespan of a decade.  The Micro LED TV will come with a Micro AI processor which will optimise viewing experience and better the performance of the TV. With a 99.99% body-to-screen ratio, the new 110-inch Micro-LED screen provides a viewing experience akin to a painting in motion.

The TV will come with a multi-view option which will allow its viewer to watch four different channels at one time. The TV will also have a Majestic Sound System and an Object Tracking Sound Pro system which delivers clear and loud sound that is well-coordinated with the video in play.

Although Samsung is yet to reveal the price of the new 4K 110-inch Micro LED TV, it will be placed in the premium segment of TV sets and priced higher than most Samsung sets. No matter what price tag it will come with, the viewing experience that the TV promises its viewers should be worth every penny.