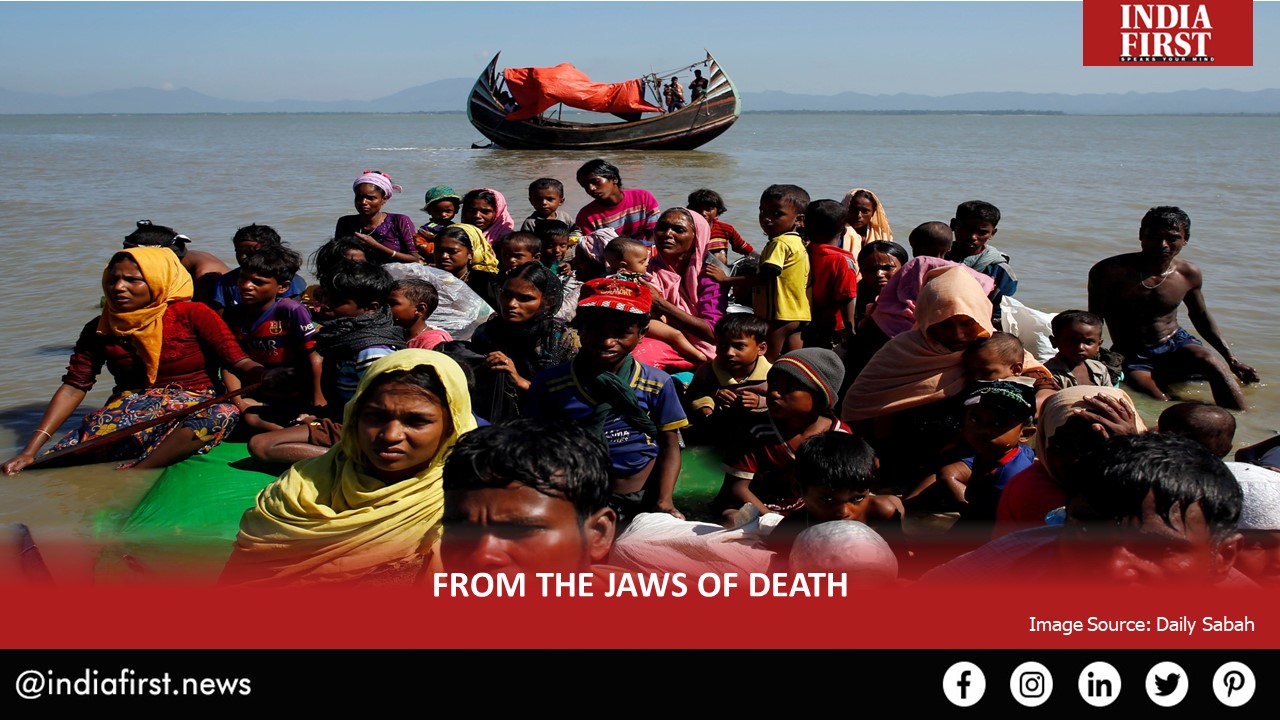 The Indian Coast Guard has been a godsend for Rohingyas and Bangladeshis stranded on a broken-down boat in the high seas, but the morbidly sick refugees are not out of danger yet.

Humanitarian groups monitoring the plight of the stranded Rohingya group on high seas said the Indian Coast Guard have given them some food and water, but a full rescue operation has not yet happened.

“The last we heard from the Rohingyas was on Monday evening when the one sat-phone in the boat was still working. They reported that the Indian vessels had reached their boat and some food and water has been provided,” said Chris Lewa of the Bangkok-based ‘Arakan Project’.

Lewa, who has long association with the Rohingyas through her humanitarian project to provide relief to the hapless refugees often stranded in hostile host countries or at sea, welcomed the Indian supplies but added: “What the Rohingyas on that boat need most now was medical attention. Many of them are awfully sick, down with dehydration and acute diarrhoea, and at least eight of them have died so far.”

She said they had not yet received any information of a full-fledged rescue mission by the Indian vessels, but said that should happen sooner rather than later.

“Or else many Rohingyas will die.”

The ‘Arakan Project’ has confirmed the presence of 65 Rohingya women and girls, five children below the age of 2 and 20 men in the boat.

“Since the boat’s engines stopped functioning six days ago, it has been drifting towards India’s Andaman islands from its course. The Rohingyas boarded the boat south of the Bangladesh seaside town of Cox’s Bazar on 11th February and was headed towards south-east Asia when its engines broke down,” Chris Lewa told this writer.

But Indian navy sources said they were ‘trying to ascertain the identity of a boat that seems to have drifted into Indian waters off the Andaman coast’.

So Lewa said she was directly appealing to the Indian government, especially the Indian navy and coast guards deployed in Andamans, to intervene.

“Indian Coast Guard patrols have traced the Rohingya boat 40 km east of Rangat in the Andamans. They should save the inmates by taking them to safe shelter with food, water and medical treatment,” Chris Lewa said.

“They told me that 3 inmates of the boat died on Saturday and 5 on Monday — all victims of acute diarrhoea after consuming sea water,” said Chris Lewa.

UN High Commissioner for Refugees (UNHCR) has also appealed for immediate rescue of the Rohingya refugees on this boat.

The United Nations High Commissioner for Refugees or UNHCR says it received reports of an “unconfirmed number of Rohingya refugees aboard a vessel in distress as of the evening of Saturday 20th February”.

“Saving lives must be the priority,” said Indrika Ratwatte, the director of the UNHCR Regional Bureau for Asia and the Pacific said in a statement.

“In line with international obligations under the law of the sea and longstanding maritime traditions, the duty to rescue persons in distress at sea should be upheld, irrespective of nationality or legal status. We appeal to all governments to deploy their search and rescue capacities and promptly disembark those in distress.”

“Many are in a highly vulnerable condition and are apparently suffering from extreme dehydration,” Ratwatte added. “We understand that a number (of) refugees have already lost their lives and that fatalities have risen over the past 24 hours.”

Hundreds of thousands of mostly Muslim Rohingya have been living in refugee camps in Bangladesh since they were forced out of Myanmar in a brutal military crackdown in 2017.

Muslim-majority Malaysia has long been a favoured destination for the group who are among the world’s most persecuted peoples. And although boat journeys have declined in recent years, governments around Southeast Asia have tightened borders during the COVID-19 pandemic.

There are currently some 1,02,250 Rohingya registered with the UNHCR in Malaysia but rights groups say there are many more who are undocumented. Neither Malaysia nor Indonesia are signatories to the UN convention on refugees.

UNHCR said it would provide humanitarian assistance and quarantine measures for those who were rescued, in line with public health protocols.

“The fact that refugees and migrants continue to undertake fatal journeys accentuates the need for immediate and collective regional response to search, rescue and disembarkation,” the agency said.