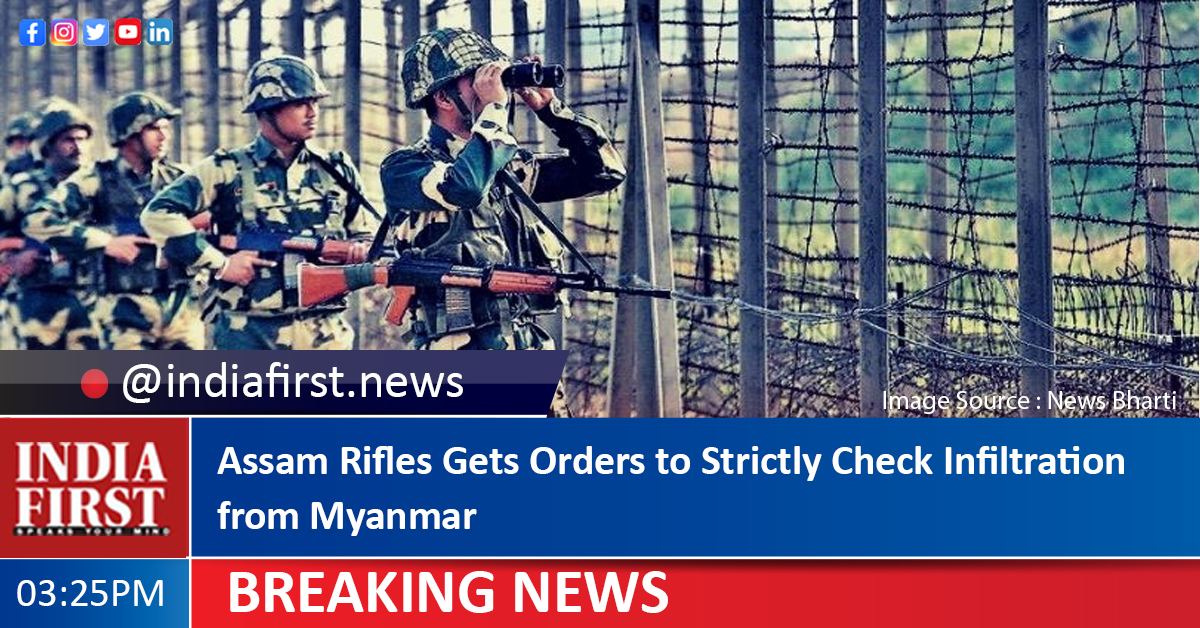 The Union Home Ministry has asked the paramilitary Assam Rifles to prevent any Myanmar national from crossing into Indian territory and push back any found attempting to cross over.

The Assam Rifles guards the India-Myammar border in the northeast, while the BSF guards the border with Bangladesh.

Top sources in the paramilitary force said that the “instructions from the top” was clear and unambiguous: no Myanmar national should be allowed to enter India without valid visa or travel permit.

The India-Myanmar border has a Free Movement Regime (FMR) which allows tribes living along the border to travel 16 km across either side without visa restrictions and on a simple permit issued by local authorities.

There are over 250 villages with over 300,000 people living within 10 km of the border who frequently cross through 150 small and large formal and informal crossings.

The order follows the considerable embarrassment now faced by New Delhi after Myanmar officially asked for immediate return of eight policemen who had crossed over and sought shelter in the northeastern state of Mizoram.

The policemen told state authorities that they were hounded down by the army after they refused to open fire on peaceful demonstrators in the Chin state.

It is not clear why the Chin state administration has asked for return of only eight policemen when reports from Mizoram suggest nearly 30 people, mostly policemen and their family members, had taken shelter in Mizoram’s Champhai district after the February 1 military takeover in Myanmar.

The Mizoram Home Department confirmed that at least 16 Myanmar nationals, including some policemen, have crossed over into the state.

One Indian intelligence official said the Myanmarese are perhaps not yet aware of all those who have fled the country and had confirmed information about only eight policemen whose repatriation has been sought.

Champhai district’s Deputy Commissioner Maria CT Zuali told this writer that she had received a formal letter from her counterpart in Chin state requesting a “friendly gesture” by handing over the eight Myanmar policemen.

Zuali said she was waiting for instructions from the Centre and the Mizoram government.

During the 1988 uprising and the massacre of thousands that rocked Myanmar, India opened its borders to those fleeing the crackdown.

Thousands of Myammarese, including MPs, entered Manipur and Mizoram and many of them reached Delhi and secured UNHCR refugee cards.

The then Rajiv Gandhi government decided to back and even fund the Burmese provisional government in exile.

But Indian policy changed since the late 1990s when the first BJP-led government took charge in Delhi.

Prodded considerably by the Indian army which sought better relations with Burmese military Tatmadaw to neutralise the northeastern rebel bases in Myanmar’s Sagaing region, the BJP government not only pushed back many Myanmarese, including a military deserter who was possibly executed.

It also stopped all covert support that had earlier been provided to Myanmar’s rebel armies like Kachin Independence Army (KIA) and the National Unity Party of Arakans (NUPA).

Eight top NUPA leaders were killed by a military intelligence umit headed by one Colonel B.J.S. Grewal and more than 30 NUPA activists were interned in the Andamans during ‘Operation Leech’ in 1998.

The detained NUPA activists were finally released by the Calcutta high court when the military lawyers backed off from pressing charges of gun-running againt the NUPA rebels, as embarassing facts of close support provided to them prior to a double-cross by Col Grewal surfaced during the court proceedings.

Human Rights lawyer Nandita Haksar, who defended the NUPA rebels, later exposed the truth behind ‘Operation Leech”‘ in her book ” The Rogue Agent”.

Both the Manmohan Singh and the Narendra Modi governments have pursued consistently a robust engagement both with Aung San Suu Kyi’s NLD party and the Tatmadaw, both to ensure action against northeastern rebels and to prevent a drift towards China.

Following the February 1 coup, India pitched for an “orderly democratic transition” but stopped short of direct criticism of the military-dominated State Administrative Council.