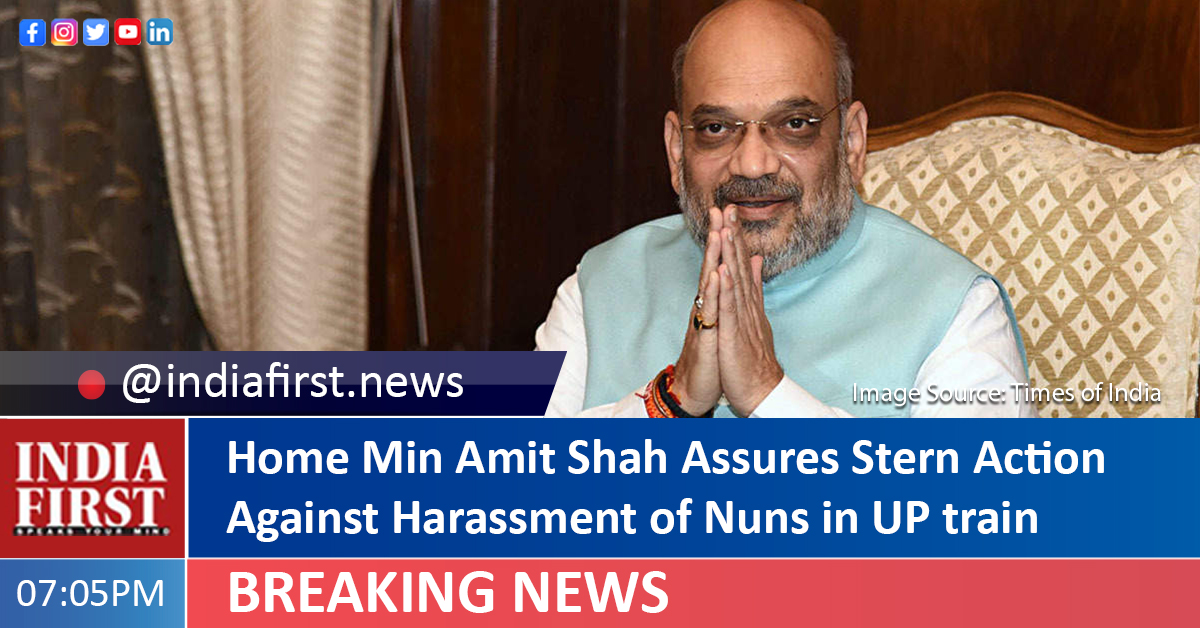 Members of the Akhil Bharatiya Vidyarthi Parishad (ABVP), who allegedly heckled and forced two nuns and two novices to get off a train in Jhansi district, are now in the midst of a major controversy.

Union Home Minister Amit Shah has assured that strict action would be taken against all those involved.

He said this while addressing an election rally of former Union Minister of Tourism and presently BJP Rajya Sabha member K.J. Alphons, who is contesting from his home turf of Kanjirapally, a constituency which he represented as a Left Independent candidate between 2006-11 as well.

“Our government is always concerned about the minority communities and I assure you that there will be strict action against those who harassed the nuns in Uttar Pradesh,” said Shah.

He went on to point out that the state government in Uttar Pradesh is one of the strongest governments in the country where the rule of law is imposed strictly. “I assure all of you that all those who are guilty of harassing the nuns would be brought before the rule of law and the maximum punishment would be given,” added Shah.

The Kerala unit of the BJP gave a memorandum on the harassment suffered by the nuns to Shah when he arrived in the state last night for today’s day-long election campaign.

On March 19, the ABVP members had accused the nuns and novices of carrying out religious conversions.

The four were allowed to proceed only after an inquiry at the railway station established there was no conversion involved.

The ABVP is the student’s wing of the Rashtriya Swayamsevak Sangh, the ideological mentor of the BJP.

“Those involved in the Jhansi nuns’ harassment incident will be brought before the law,” Amit Shah told reporters in Delhi on Wednesday.

According to reports, the incident took place last week when the nuns were travelling on the Haridwar-Puri Utkal Express.

A 25-second video from the train compartment shows the women surrounded by some men, some of whom appear to be policemen.

“Go get your luggage. You will be sent home if what you are saying is correct,” a man is heard saying while another is heard saying, “Why are you indulging in netagiri?”

Naeem Khan Mansuri, the Superintendent of Railway Police in Jhansi in a detailed statement said: “There were some members of the ABVP who were returning from a training camp in Rishikesh on board the Utkal express to Jhansi.

“Four Christian ladies were travelling on the same train from Hazrat Nizamuddin in Delhi to Rourkela in Odisha. Two of them were nuns and two were under training. These members of the ABVP suspected that these two nuns were taking the other two women for conversion because the nuns were speaking to the other ladies.

“They informed the Railway Protection Force that then informed the railway police. These ABVP members also gave a written complaint about conversion. I reached the spot and made inquiries. These inquiries revealed that the two other women were from Odisha’s Rourkela and were under training.

“We checked their certificates and both had 2003 baptism certificates and this proved both women by birth were Christian and that no conversion was involved. After this, we sent all four women onwards to their destination in Odisha.”

When contacted, however, the SP did not respond to calls.