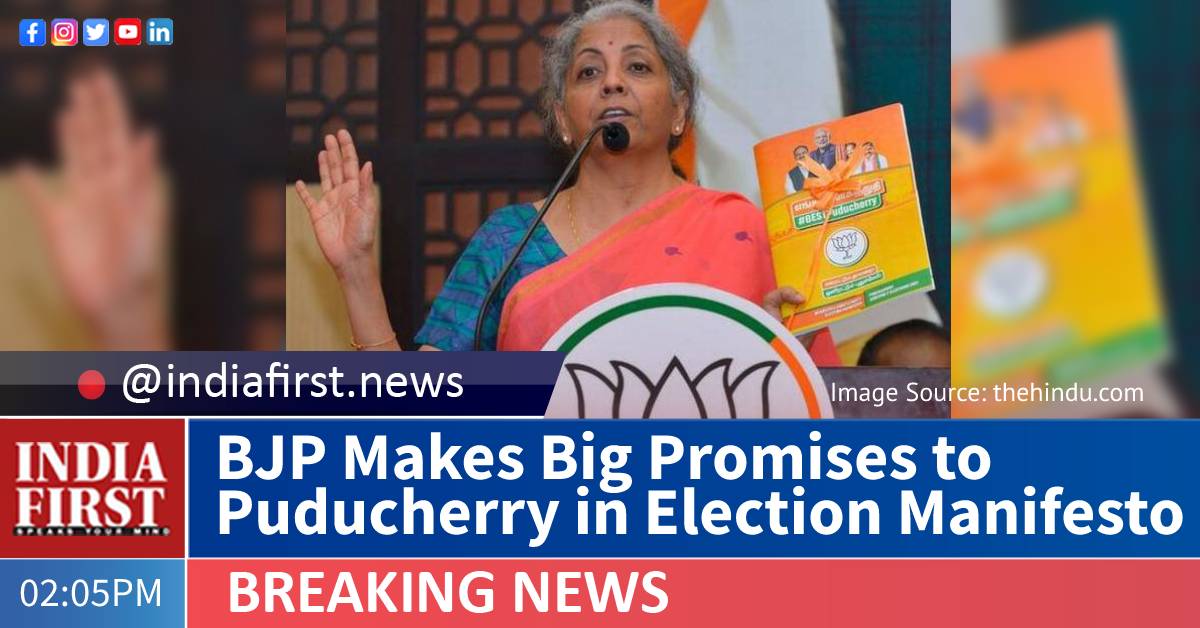 Union Finance Minister Nirmala Sitharaman released the election manifesto of the BJP for the April 6 Puducherry Assembly polls yesterday with a slew of welfare measures and promising creation of 2,50,000 jobs for the youth.

Puducherry will get “Special Union Territory” status. This will ensure devolution of funds from 25 per cent to 40 per cent as was done in Jammu and Kashmir.

The manifesto also promised to meet the aspirations of the people as it is finalized after getting feedback from the public. The BJP had gathered opinion from around 50,000 people of Puducherry before preparing the manifesto.

“A BJP government at the Centre and the union territory will ensure implementation of all central schemes. The previous state government did not do this fearing that the credit would go to the central government and Prime Minister Narendra Modiji,” the minister said.

The manifesto promises measures aimed at the empowerment of women, besides making Puducherry a spiritual hub and provide free and quality education to girls from Kindergarten to Post-Graduate level. The BJP has also promised free scooters to girls in colleges.

The promises also include interest-free loans of up to Rs 5 lakh for women self-help groups and also waiver of loans taken by Women SHG’s which were affected by the Covid-19.

There will be 50 per cent reservation for women employees in government institutions and in local body elections, the manifesto promised, besides free public transport for women.

The manifesto promises to built a 150 ft statue of poet Subramania Bharathy and set up new tourism centres across Puducherry to promote tourism. It also promised to constitute new IT Parks, Textile parks, an elevated railway line to Chennai via Mammalapuram.

Creating separate school education board for Classes 10 and 12 that has been a long pending demand of the people of Puducherry.

The BJP has promised to convert Puducherry to a spiritual hub and to restore the glory of Thirunallar temple – a new temple complex will be built. All donations at places of worship will be removed from government-control, the manifesto promised.

Puducherry Public Service Commission will be constituted for government jobs which is a long pending demand of the people of the UT.