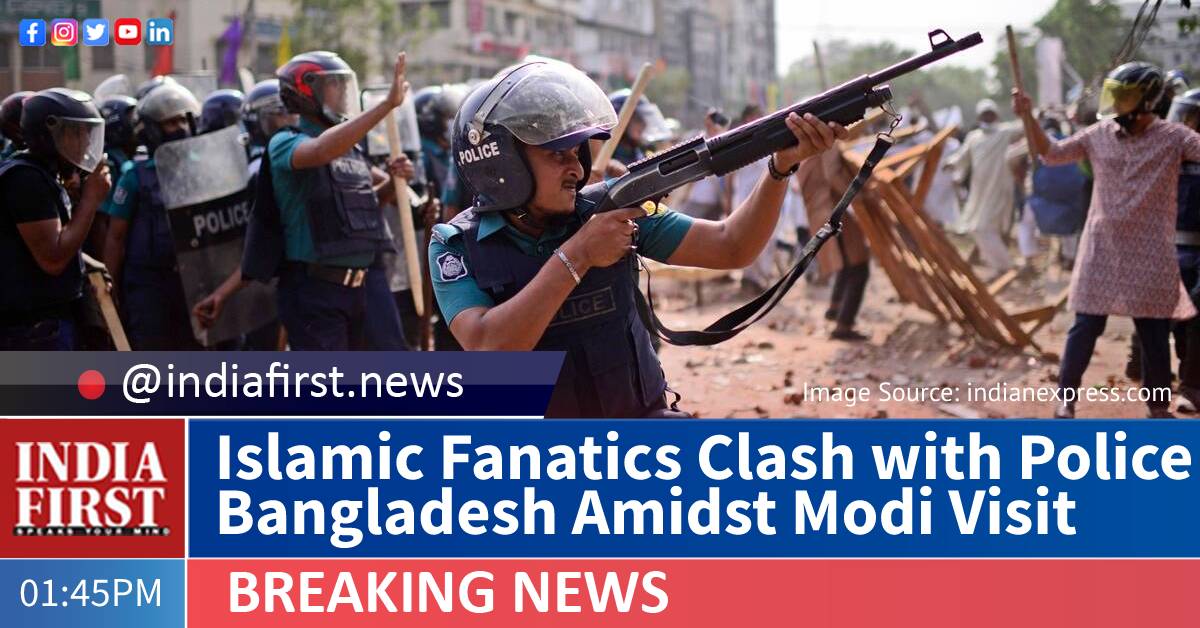 Violent clashes broke out between the police and the supporters of radical Islamist group Hefazat-e-Islam in Dhaka and Chittagong after the cops thwarted an attempt to launch an anti-Modi protest in front of the Baitul Mukarram National Mosque in the Bangladesh capital following Friday prayers.

Prime Minister Narendra Modi arrived in Dhaka yesterday on a two-day visit to Bangladesh to attend the celebrations of the country’s 50th year of liberation from Pakistan and the 100th birth anniversary of its founder Sheikh Mujibur Rahman, the father of Prime Minister Sheikh Hasina.

After the police resorted to lathi charge and tear-gas shelling to stop the Hefazat supporters from taking out a march to protest against the Indian Prime Minister’s visit, leaving several persons injured, around a thousand students of Hathazari Madrasa in Chittagong, known to be a stronghold of the radical group, attacked a police station there, leading to clashes in which at least five persons received injuries.

A large number of Hefazat supporters had gathered at Dhaka’s prominent Baitul Mukarram mosque for Friday prayers. As they were about to take out an anti-Modi march soon after the prayers ended, they were stopped by the police and the altercations between the two sides soon turned violent after a few Hefazat followers hurled brickbats at the cops.

The police first tried to disperse the crowd by using tear-gas shells. But as things turned bad, they fired from shotguns and used rubber bullets and water cannon to bring the situation under control. As per some eye witnesses, the opposite side comprising mostly Islamist radicals also fired back, as the clashes went on for more than an hour.

At least 20 people, including a journalist, were injured in the clashes. The injured are being treated at the Dhaka Medical College Hospital. Vehicular movement in the area was disrupted in view of the violent protests and the situation is still tense in the Baitul Mukarram area.

As soon as the news of the clashes spread to Chittagong through personal social media groups, around a thousand students of Hathazari Madrasa attacked and vandalised the Hathazari Model police station at around 2.30 p.m. in protest against Modi’s visit to Bangladesh and the police action on Hefazat supporters in Dhaka.

In the retaliatory action by the police, who resorted to lathi charge, tear-gas shelling and firing rubber bullets at the protesters, five madrasa students were injured who are being treated at the Chattagram Medical College Hospital.