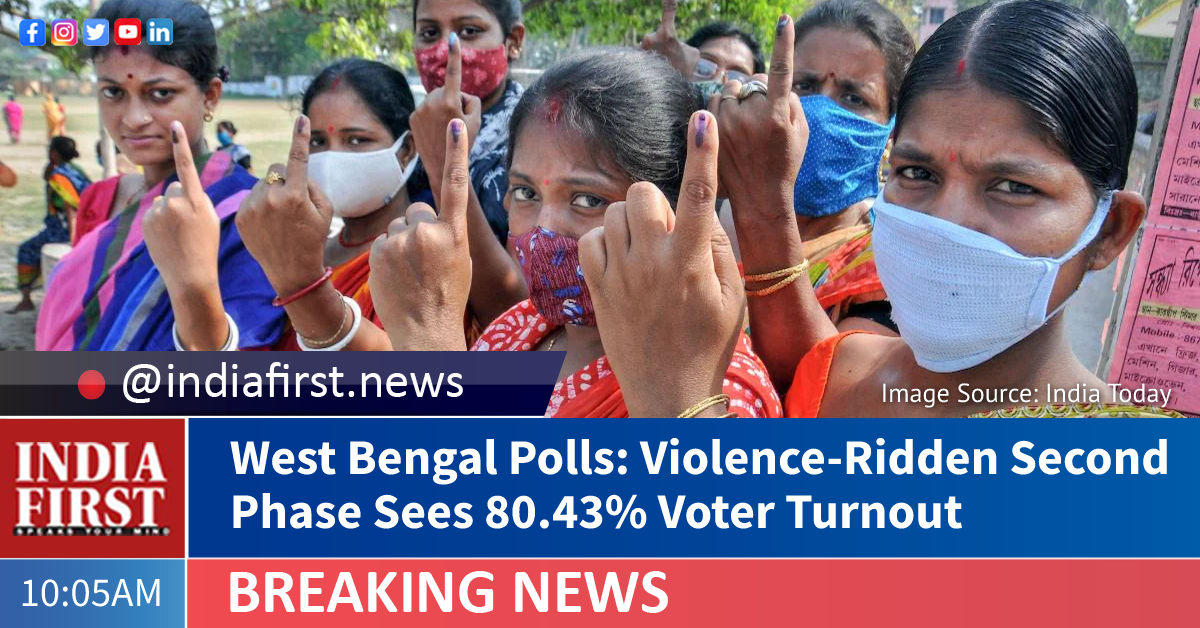 Amid reports of violence during the second phase of polling in West Bengal, about 80.43 per cent of voters exercised their franchise yesterday, as per the Election Commission’s voter turnout app.

At the end of polling last evening, both the BJP and the ruling Trinamool Congress expressed confidence of sweeping the polls, including in high-stakes Nandigram, from where Chief Minister Mamata Banerjee is contesting against her once close aide-turned-adversary Suvendu Adhikari of the BJP.

Hours before the voting began, a Trinamool Congress worker, Uttam Golui, was hacked to death in Keshpur in West Medinipur outside a party office. The Trinamool has accused the BJP of murdering Golui.

Violence was also reported from some other parts of the districts. A woman polling agent of BJP at booth number 173 in Keshpur was allegedly beaten up by Trinamool workers.

BJP leader Tanmay Ghosh’s car was vandalised in the Keshpur assembly constituency, which was placed under heavy security after stones were thrown at the BJP candidate’s car.

Earlier, some CPI-M workers agitated at Ghatal after they were allegedly stopped by Trinamool workers when they were on their way to cast their vote.

The Election Commission of India has sought a detailed report from the district administration over the reported incident of violence in Boyal area in Nandigram where Mamata Banerjee paid a visit.

Meanwhile, after casting his vote, Suvendu Adhikari said, “I have a personal relationship with every person in Nandigram. I am pretty confident of winning the elections.”

Trinamool Rajya Sabha MP Derek O’Brien tweeted: “BJP and their mind games! Won’t work. Trinamool booth agents rock solid in 354 booths in Nandigram. We have registered complaints for 10 booths. All attempts by CRPF to influence/intimidate voters not working. People determined to have Mamata Banerjee as their MLA.”

Banerjee is seeking a third term in office from Nandigram. In her first two terms as the Chief Minister, Banerjee had represented Bhowanipore in Kolkata.

For her and the BJP, the battle for Nandigram is a prestige fight because it was the 2007 agitation against land acquisition in the region which catapulted her to the Chief Minister’s post and to the centre stage of politics in the state, paving the way for the Trinamool’s victory in the 2011 Assembly polls that ended 34 years of Left Front rule in the state.

In the high-stakes poll battle this time, a victory is a must for Banerjee so that she can lead the government and keep together her party, which has faced defection multiple times.

For Adhikari, it is a battle for political survival as a defeat would be a devastating blow and might also put a question mark on his political graph in his new party, the BJP.

A victory would not only establish him as one of the tallest leaders in West Bengal, but would also push him a few miles ahead of the others in the Chief Ministerial race in case the BJP is voted to power.

Nearly 700 Central Armed Police Force (CAPF) companies were deployed in all the districts to ensure peaceful and fearless environment for polling.