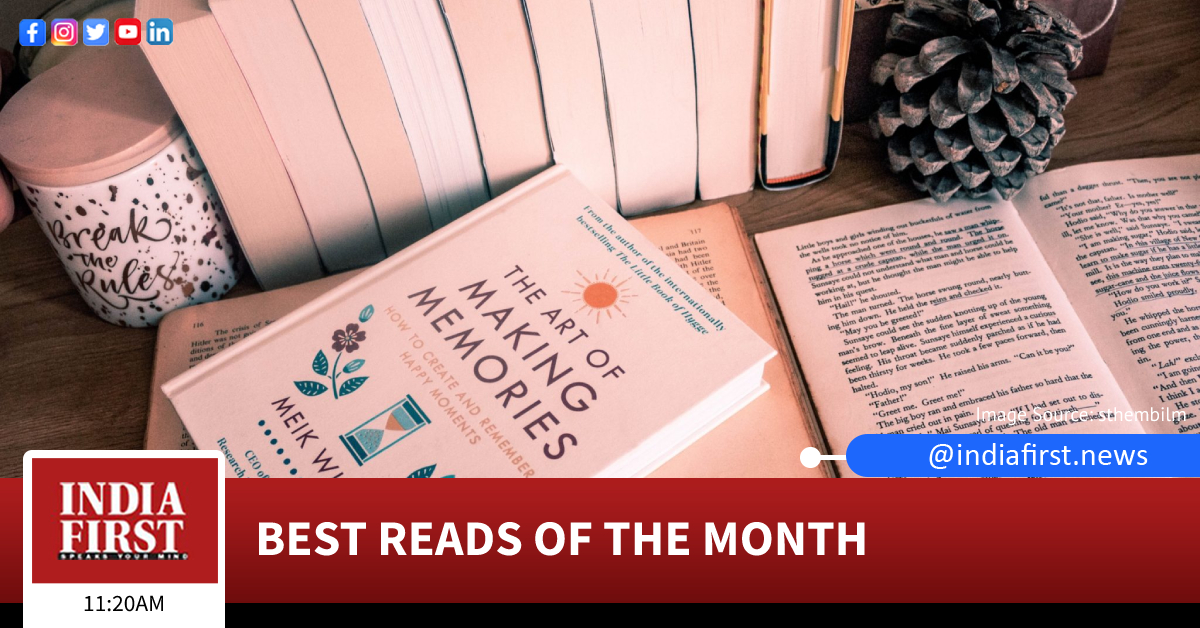 As the year heralds the season of warmth, one may be tempted to spend sunny afternoons inside, in the company of good storytelling. Here’s a curated list of reads to curl up with this summer.

Happy memories do not have to be reserved for big life events. Drawing on global surveys, behavioural science experiments and data gathered by The Happiness Research Institute in Copenhagen, Meik shows how we can turn ordinary experiences into something extraordinary. Whether it’s eating dinner at the table rather than in front of the TV, exploring a new part of your neighbourhood, or planning how you’re going to celebrate your small wins, this book will help you find the magic in the everyday, and create memories you will cherish forever.

‘Marriage in the Time of Corona’ (by Arbind Bhatia)

The book follows the travails of an affianced couple over a fortnight as they struggle to tie the knot in early 2020 – a watershed time in global history, when the horrific effects of the Coronavirus pandemic are just making their presence felt worldwide, and nations follow one another into lockdown mode, much like dominoes falling in tandem. The groom is a westernized Sikh of Indian descent, who has returned to his birthplace for his nuptials with his Buddhist Thai bride in tow. After two failed previous attempts at getting hitched, this is now their third attempt to wed. However, even this is in jeopardy as the bride’s family is prevented from attending as travel restrictions begin to shut down the world, and other crises create more hurdles in their path. Flashbacks interspersed throughout the book highlight the relationship history of the couple. Events during the chaotic fortnight showcase familial relationships and interactions in the backdrop of inter-religious marriages, and their marked lack of acceptance in India, even in these contemporary times.

‘All You Need is Josh: Inspiring Stories of Courage and Conviction in 21st Century India’ (by Supriya Paul)

In a world filled with cynicism, few stand tall, carving their own path to success with courage, determination and grit. All You Need Is Josh brings stories of such unique individuals across India: of the aspiring astrophysicist who wanted to walk on the moon; the first person with a disability to top the civil services examinations; the domestic help who is now a published author; the army officer who amputated his own leg; the transgender woman who was expelled from her house; the Dalit child bride who now runs a business worth Rs1,000 crores, and many more. Filled with anecdotes and life-changing missives, these stories will remind you that it does not matter the circumstances into which one is born what matters most is having the josh to overcome all odds and chase your dreams.

‘The Tonic’ (by Mayur Sudhakar Sarfare)

Set in the year 1992, The Tonic is an emotionally wrenching tale of an unlikely friendship between Masher and Raem, two young outcasts with psychological deficiencies. We see through their eyes what the riots do to them and the people of Bombay, which mysteriously connects decades later to the life of a media tycoon cum atheist, who has genocidal plans for the religious! Mumbai, 2017: Reymerg D’Souza, a media tycoon and powerful militant atheist, harbours an ominous plan to cleanse the country of religion. Avantika Das, an investigative journalist, partners with a suspended cop to embark on a perilous journey to expose Reymerg’s darker agendas. Back in 1992, two young misfits are drawn together by the ravages of an approaching Hindu-Muslim riot. Masher, a diffident teenager with a speech disorder is forced into participating in an annual elocution contest held in his school. During this period, he befriends Raem, a twenty-one-year-old recluse of foreign descent, who gifts him a packet of mysterious chocolate pills. The pills magically begin to embolden their lives. They begin to win moments and people. A Tonic that turns them from being misfits to Stupefiers.

‘Billions Under Lockdown: The Inside Story of India’s Fight Against Covid-19’ (by Abantika Ghosh)

When WHO first declared COVID-19 a global pandemic in March 2020, there was a great deal of apprehension about how India – the country with the highest TB cases and diabetes, inadequate health infrastructure and a population of 1.3 billion – would fare. Between the Janata Curfew and the first vaccinations, a massive machinery has been working as seamlessly as possible to make sure that, despite some missteps and missed infections, India conquers what has been the greatest challenge the world has encountered in decades.