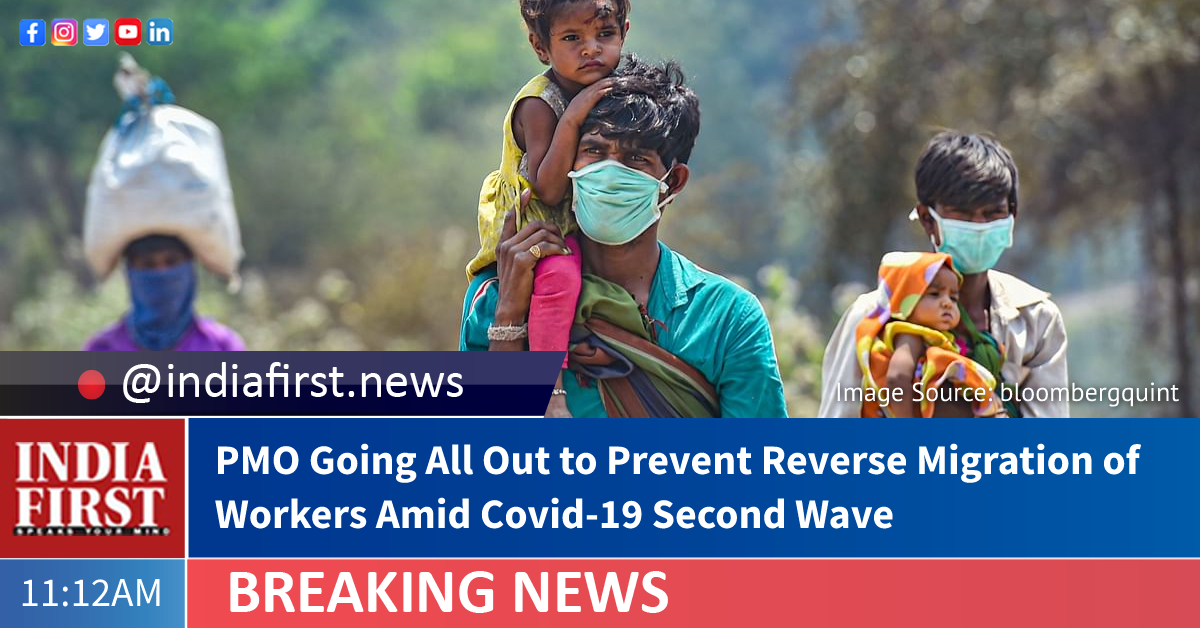 With a sudden surge in Covid-19 cases in India, preventing another reverse migration of workers, particularly from key industrial areas, seems to be the top-most priority of the Prime Minister’s Office (PMO).

In a bid to avert any panic-like situation similar to that of last year, the government, including local administration and railways, are working on an elaborate plan to prevent the exodus of labourers from major cities, including Mumbai.

Top sources in the government said the local administration in industrial pockets of Mumbai and other metros have been asked to approach factory management, labour unions and concerned groups to convince the migrant workers not to get scared of the sudden resurgence.

Industrial bodies and factory managements are also being apprised of the ongoing vaccination plan which will be escalated in weeks to come and would cover industrial workers.

The PMO is concerned about the migrant workers and wants to prevent mass exodus of workers which resulted in loss of jobs and human miseries last year.

On April 7 night, several hundred migrant workers had flocked to the railway stations at Bandra, Dadra and Churchgate, triggering fears that a mass exodus has started and may affect production in factories.

However, the authorities concerned said that platforms were crowded mainly due to summer rush.

“I have spoken to IG, RPF Central Railway and IG, Western Railway in Mumbai. I want to clarify that groups of workers stayed at different railway stations because of the night curfew in Mumbai. They returned to their factories when curfew was lifted. The rush seen at platforms was mainly of waitlisted passengers boarding summer special trains,” said Arun Kumar, Director General (DG) of the RPF.

He informed that all efforts are being made to allay fears relating to reverse migration of workers.

“Our officers at the Western and Central Railway are coordinating with CP (Railways, Mumbai Police) and concerned authorities in industrial areas. They are being apprised of Covid protocols. Meanwhile additional special trains are being run to take care of the usual summer rush.,” said Kumar, a 1985-batch UP cadre IPS officer.

Yesterday, the DG and a team of senior officials held an important meeting with Chairman, Railway Board to further review the situation in Maharashtra, primarily Mumbai, a major railway hub in India presently facing the highest spike in cases relating to pandemic.

During March 2020, several lakh migrant workers returned to their villages, many of them reaching home on foot, as trains and local transport were shut due to nationwide lockdown.

Stories of human miseries and sufferings of migrant workers during their journey to villages had caught much media attention.

Sources said that Prime Minister Narendra Modi was perturbed over such incidents where poor labourers had to walk on foot, often without food for days.

“This time we are on alert. The government doesn’t want this to happen again. All-out efforts are being made at every level to prevent large-scale migration of labourers. In a Covid-affected economy, health of factory workers as well as the country’s industrial production is our top priority,” a senior officer said.