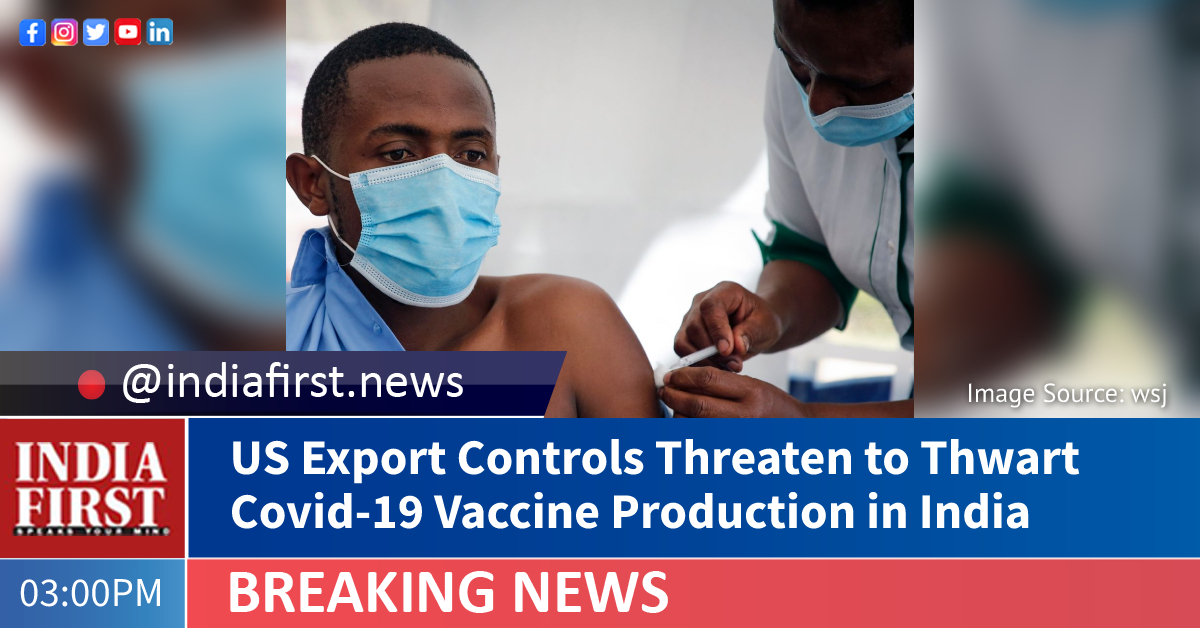 Production lines in India, making at least 160 million doses of Covid vaccine a month, will come to a halt in the coming weeks unless America supplies 37 critical items, The Economist reported.

A report in The Economist said last week, the billionth dose of Covid-19 vaccine was produced.

It is a sign of how greatly manufacturing capacity has expanded over the past six months that the next billion doses could be produced by May 27th, according to Airfinity, an analytics firm.

“Yet this ambition is at risk from American export controls on raw materials and equipment. Production lines in India, making at least 160 million doses of Covid vaccine a month, will come to a halt in the coming weeks unless America supplies 37 critical items,” the report said.

SII is manufacturing Covishield, developed by AstraZeneca and Oxford University. The vaccine is not only being used in India but also exported to a number of countries.

Tagging the Twitter handle of the President of the United States, Poonawalla wrote, “Respected @POTUS, if we are to truly unite in beating this virus, on behalf of the vaccine industry outside the US, I humbly request you to lift the embargo of raw material exports out of the US so that vaccine production can ramp up.”

With the number of new Covid-19 cases nearly doubling over the past two months, approaching the highest infection rate the world has seen during the pandemic, the unequal distribution of vaccines is not only a moral outrage, but economically and epidemiologically self-defeating, the head of the UN health agency told a special ministerial meeting of the Economic and Social Council (ECOSOC) on April 16.

“Vaccine equity is the challenge of our time,” World Health Organisation (WHO) Director-General Tedros Adhanom Ghebreyesus told the gathering in his opening remarks. “And we are failing.”

Driving that point home, he said that of the 832 million vaccine doses administered, 82 per cent have gone to high or upper middle-income countries, while only 0.2 per cent have been sent to their low-income peers. In high-income countries alone, one in four people have received a vaccine, a ratio that drops precipitously to 1 in 500 in poorer countries.

Rapidly spreading variants, the inconsistent use and premature easing of public health measures, fatigue with social restrictions and the “dramatic” inequity in vaccine coverage; all have led to an alarming spike in new cases and deaths, he said.

The WHO chief called on countries with enough vaccines to cover their populations “many times over” to make immediate donations to COVAX.

In March, the WHO called on all countries to drop restrictions on the export of vaccines and vital components, as a rush for Covid-19 jabs puts pressure on global supply, Irish Times reported.

Several countries around the world have imposed bans or restrictions on exports of doses and key vaccine ingredients amid a scramble for stock, causing logjams in complex international pharmaceutical supply chains that could slow progress to end the pandemic, the global health body warned, as per the report.

“Some countries have imposed legal restrictions on the export of critical supplies. This is putting lives at risk around the world. We call on all countries not to stockpile supplies that are needed urgently to ramp up production of vaccines,” the WHO chief said.