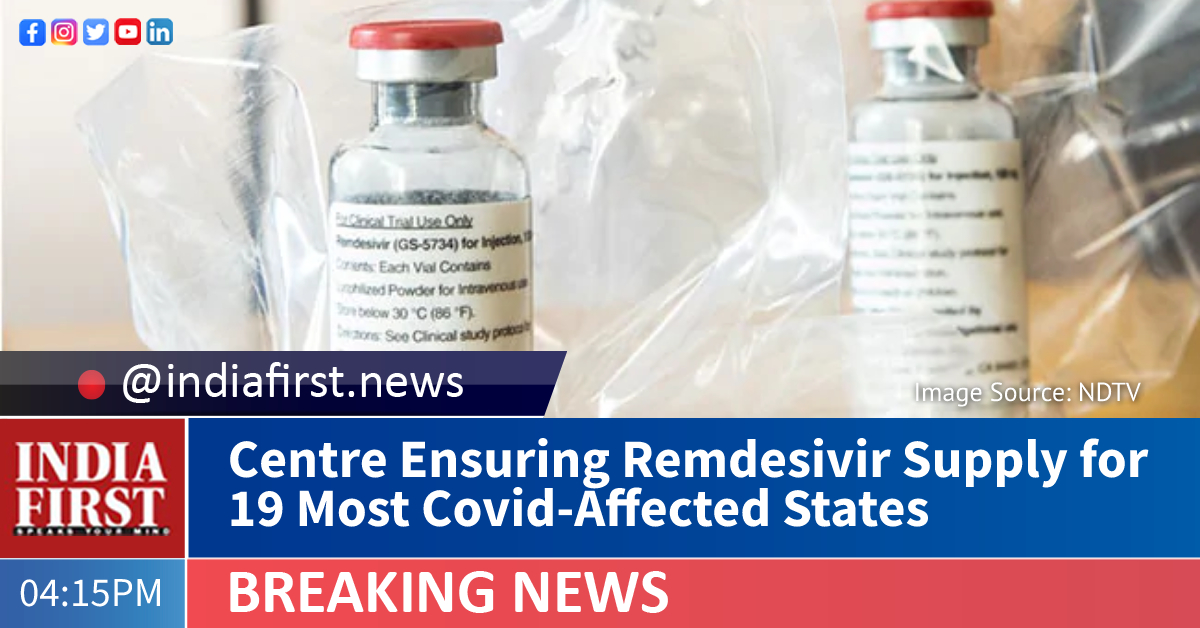 Addressing shortages of Remdesivir in certain regions of the country, the Central government yesterday made interim allocation of the key anti-viral drug for 19 states/Union Territories for the period up to April 30.

In a statement, the Union Health Ministry said: “Keeping in mind the sudden surge in demand in the country for Remdesivir injection required for Covid-19 therapy, the manufacturing capacity of domestic Remdesivir manufacturers has been ramped up.

“All support is being extended to manufacturers by the government in this endeavour. The production capacity is being ramped up from a current level of 38 lakh vials per month to 74 lakh vials per month, and 20 additional manufacturing sites have been approved. Export of Remdesivir has also been prohibited on April 11 in order to shore up domestic supplies.”

According to the Ministry, to further address reports of shortages in certain regions and facilitate smooth inter-state supply, it has, in coordination with the Department of Pharmaceuticals, made this interim allocation.

“The allocation includes bulk purchases made by the states as well as supplies through private distribution channels. This initial allocation is dynamic and will be reviewed constantly in consultation with the states, to ensure all needs can be met within the available supplies,” the Ministry said.

States not covered by the above-mentioned allocation will be considered for allocation when their supply orders are placed with the manufacturers.

Manufacturers have been directed to manufacture and dispatch the supplies as per the agreed state allocation and mapping. They may be asked to balance supplies to the government and distribution channels.

All states may place their supply orders to manufacturers, if not already done, either by Government purchase or distribution channel, within the abovementioned state-wise allocation and manufacturer-wise mapping. In case any state does not require or is unable to fully utilise its allocation before April 30, that would be available for re-allocation to other states as per their requirement.

A Control Room set up by National Pharmaceutical Pricing Authority (NPPA) shall be responsible for monitoring the operations as per the allocations. A Whatsapp group comprising nodal officers of states to coordinate unhindered movement of Remdesivir within the country is also being created. “Liaison Officers of the Remdesivir manufacturers and officials of the Ministry of Home Affairs, Dept of Pharmaceuticals, National Pharmaceutical Pricing Authority (NPPA) and Central Drugs Standard Control Organisation (CDSCO) would be part of this Group for day-to-day monitoring and coordination,” the Ministry said.