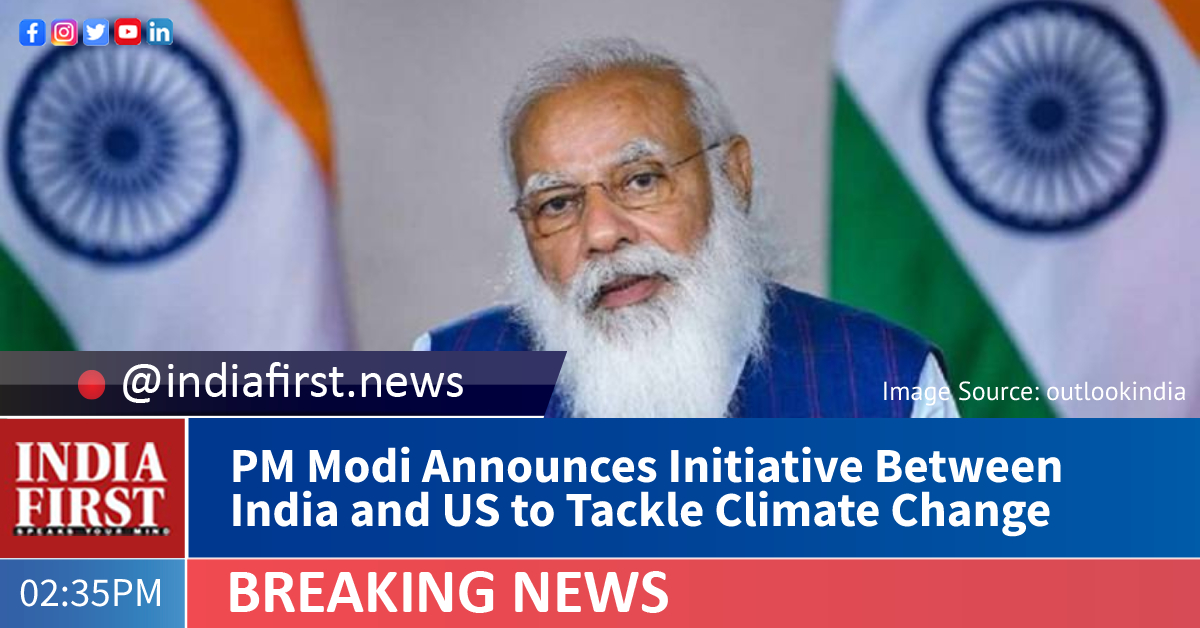 Warning that the Covid-19 pandemic is a grim reminder of the dangers of climate change, Prime Minister Narendra Modi yesterday announced a global initiative in cooperation with the US to mobilise investments for the greening of the world and promote collaboration to fight global warming.

“Humanity is battling a global pandemic right now and this event is a timely reminder that the grave threat of climate change has not disappeared,” he said at the Leaders Summit on Climate Change convened by President Joe Biden.

“President Biden and I are launching the India-US Climate and Clean Energy Agenda 2030 Partnership. Together we will help mobilise investments, demonstrate clean technology and enable green collaboration.”

Leaders of 40 countries are participating in the summit. They include Presidents Xi Jinping of China and Vladimir Putin of Russia, with whom Biden has an increasingly hostile relationship, but they have put aside their difference in the climate cause.

Biden said: “The signs are unmistakable (of climate change dangers). The science is undeniable. The cost of inaction keeps mounting. The United States isn’t waiting. We are resolving to take action.”

Biden said that the US would cut its greenhouse emissions from the 2005 level by half by 2030.

He announced the first US Climate Finance Plan to promote public sector “to increase the quality and quantity of climate financing” and spur the private sector to contribute to developing countries’ programmes.

He said that the global goal was mobilising US$100 billion per year for developing countries to meet the climate challenge.

To help meet this goal, he said that the US will double by 2024 “our annual public climate development finance to developing countries compared to what we were providing during the second half of Obama-Biden administration”.

The US will also “triple our financing for climate application for developing countries by 2024”.

Calling for an end to fossil fuel subsidies, he said that it was important to “help developing countries leapfrog to the clean technologies of tomorrow”.

In a subtle dig at the hypocrisy of Western leaders, media and activists who paint India as the third-largest greenhouse gas emitter and demand it cut down emissions, Modi pointed out that each Indian’s greenhouse gas footprint is 60 per cent lower than the world average.

“It is because of our lifestyle is still rooted in sustainable, traditional practices,” he said.

Modi said that India was doing its part to fight climate change. “Our ambitious renewable energy target of 450 gigawatts by 2030 shows our commitment. Despite our development challenges we have taken many bold steps on clean energy, energy efficiency, afforestation and biodiversity.”

“That is why we are among the few countries whose NDCs (nationally determined contributions to the Paris Climate Agreement goals) are 2 degrees Celsius compatible,” Modi said.

“Climate change is a lived reality for millions around the world. Their lives, their livelihoods are already facing its adverse consequences,” he said.

India has encouraged global initiatives like the International Solar Alliance and the Coalition for Disaster Resilient Infrastructure, Modi added.

“As a climate-responsible developing country, India welcomes partners to create templates of sustainable development in India. This can also help other development countries who need affordable access to green finance and clean technology,” he said.

Modi was the second non-US leader to speak after Xi at the virtual conference.