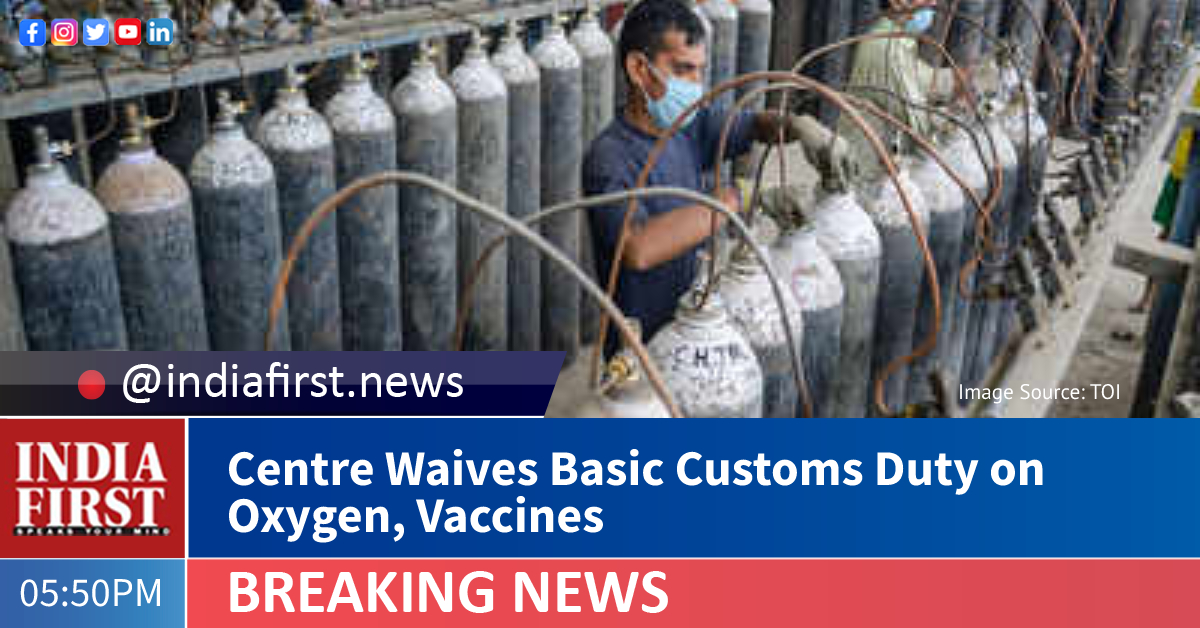 The decision came after Prime Minister Narendra Modi chaired a meeting to review steps taken to boost oxygen availability in the country. He emphasized that there was an immediate need to augment the supply of medical grade oxygen as well as equipment required for patient care both at home and in hospitals.

The Prime Minister stressed that all ministries and departments need to work in synergy to increase availability of oxygen and medical supplies. The Prime Minister was briefed that basic customs duty was exempted on Remdesivir and its API recently. It was suggested that import of equipment related to providing oxygen to patients needs to be expedited. In order to augment their production and availability and to meet the rising demand, it was decided to grant full exemption from Basic Customs Duty and health cess on import of items related to Oxygen and Oxygen-related equipment for a period of three months with immediate effect.

The government said that apart from the above, it was also decided that basic customs duty on import of Covid vaccines be also exempted with immediate effect for a period of three months. “This will boost availability of these items as well as make them cheaper,” the government said.

The Prime Minister directed the Revenue Department to ensure seamless and quick custom clearance of such equipment. Accordingly, the Department of Revenue has nominated Joint Secretary, Customs, Gaurav Masaldan as the nodal officer for issues related to customs clearance for the above-mentioned items.

The Union Government has taken a lot of measures in the last few days to improve supply of oxygen and medical supplies. IAF planes are bringing in cryogenic oxygen tanks from Singapore. The IAF is also transporting oxygen tanks in the country to reduce travel times.

Similarly, in a major decision yesterday, free food grains will be given to 80 crore Indians for the month of May and June this year. Finance Minister, Commerce and Industry Minister, Health Minister, Principal Secretary to the PM, Member NITI Aayog, Dr Randdep Guleria and Secretaries of the department of Revenue, Health and DPIIT and other officials participated in the meeting.