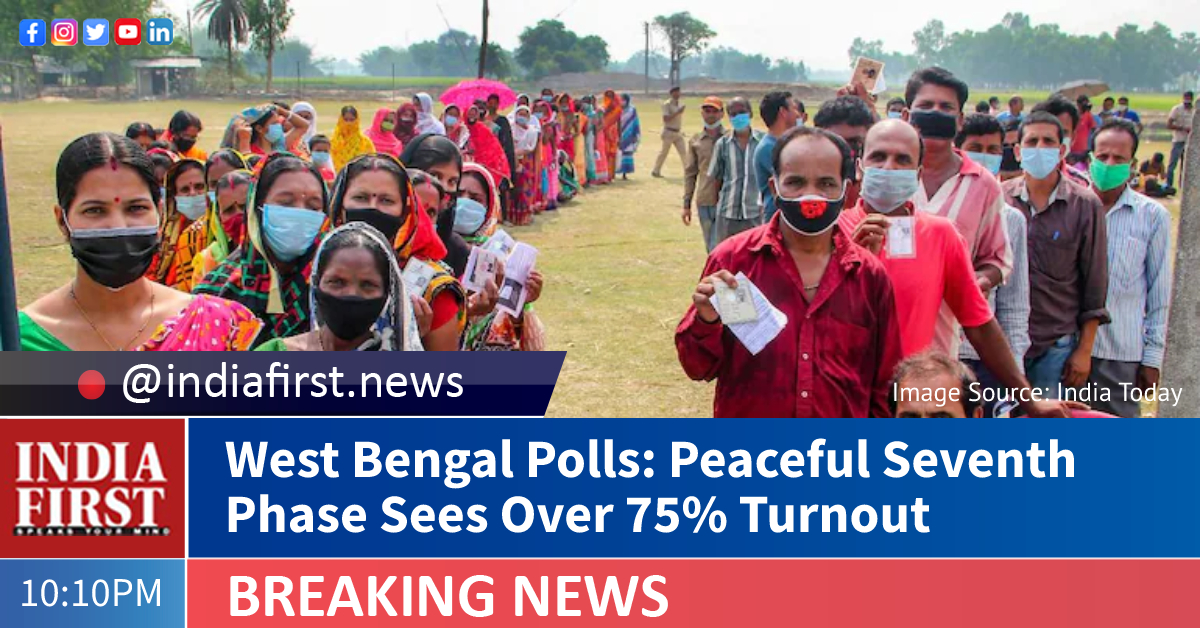 The data released by the Election Commission till 5 p.m. showed that the overall voting percentage was 75.06 per cent with Murshidabad recording the highest turnout at 80.30 per cent.

According to the data, Murshidabad, where nine constituencies went to the polls, recorded the highest turnout of 80.30 per cent, while the four seats in South Kolkata reported the lowest turnout of 59.9 per cent.

As far as individual constituencies are concerned, Raninagar in West Burdwan district recorded the highest polling of 84.35 per cent, while Rashbehari in South Kolkata recorded the lowest turnout of only 53.93 per cent.

Among the four Assembly constituencies in the state capital, including Kolkata Port, Rashbehari, Bhowanipore and Ballygunge, Rashbehari had the lowest turnout of only 55.9 per cent, which was around 66.9 per cent in the 2019 Lok Sabha elections.

Bhowanipur, from where Chief Minister Mamata Banerjee had won last time, recorded a turnout of 60 per cent, which was 66.8 per cent in the 2019 general elections.

Similarly, Kolkata Port and Ballygunje recorded a voter turnout of 64 per cent and 59.5 per cent, which was 64.2 per cent and 66.2 per cent in the Lok Sabha polls in 2019, respectively.

As far as vote share is concerned, Trinamool had an edge over the saffron brigade in the last Lok Sabha polls.

Despite a strong BJP wind in the state that helped the saffron party win 18 of the 42 Lok Sabha seats, Trinamool was successful in holding its fort in these four seats in South Kolkata.

The Assembly seat-wise analysis shows that Trinamool’s Mala Roy maintained her lead in three of the four Assembly constituencies. Rashbehari was the only constituency where BJP candidate Chandra Bose was able to win over his Trinamool counterpart.

Banerjee, a resident of Harish Chatterjee Street in South Kolkata, exercised her franchise at a polling booth in Mitra Institution school at around 3.50 p.m. Sitting on a wheelchair, she briefly paused before the photojournalists while coming out amid shouts of ‘Didi, Didi’, before boarding her car. She also flashed a victory sign towards the cameras.

However, former Chief Minister Buddhadeb Bhattacharjee, who is a resident of Palm Avenue and a voter in the Ballygunje Assembly constituency, failed to cast his vote owing to poor health condition.

A few incidents of scuffle were reported from the Asansol area, where Trinamool candidate Saayoni Ghosh claimed that BJP activists tried to jam the booths in the constituency. The allegation was dubbed as baseless by BJP candidate Agnimitra Paul.

In the Jamuria constituency, Left Front candidate Aishe Ghosh alleged that her party agents were stopped from entering the booth by Trinamool workers, a charge which has been denied by the ruling party.

As many as 742 arrests made by the police during the elections with 12 arrests in specific cases and 11 for violation of Section 144. The rest of the arrests were all preventive. Also, 57 bombs were recovered, including 22 in Murshidabad and 35 in Kolkata. Kolkata South had 380 sensitive booths.

Both Murshidabad and Malda had a previous history of poll violence and as per the Election Commission, there were 1680 sensitive booths in Murshidabad and 1,120 in Malda.

“Not a single bomb exploded anywhere in the state during the seventh phase of elections, which was the most peaceful among all the phases conducted so far. The police and the central forces have done excellent work,” said Jagmohan, ADG (Law & Order).