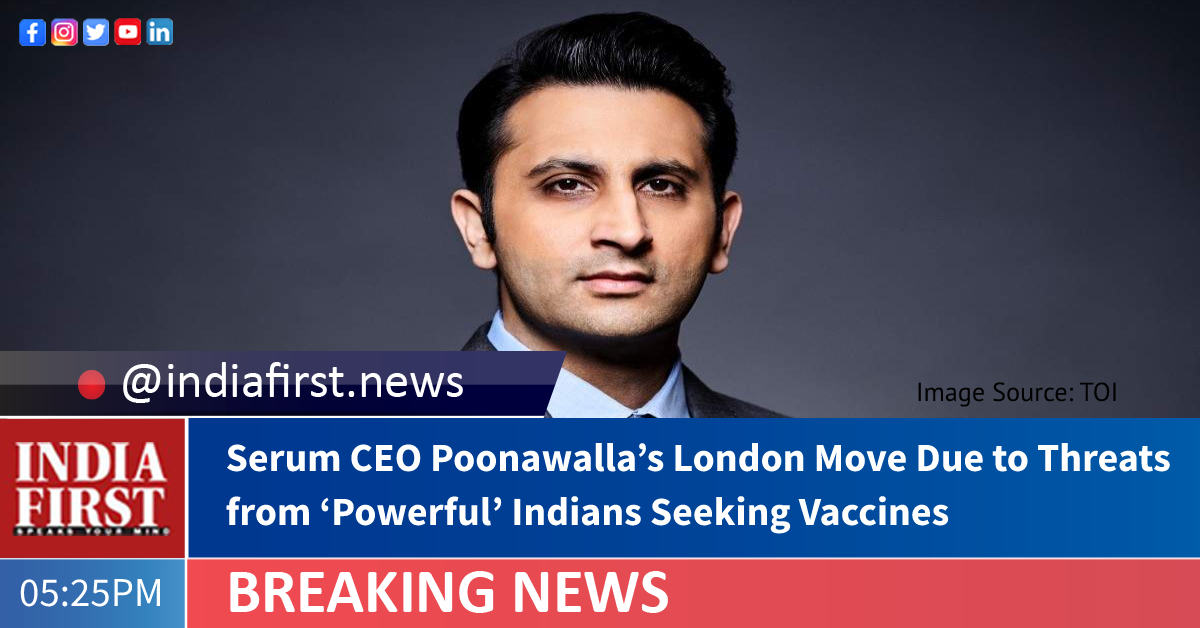 Admitting that he is facing immense pressure from “some of the most powerful people in India” demanding supplies of Covishield, Serum Institute of India (SII) CEO Adar Poonawalla said yesterday that the company is also planning to start vaccine production in the UK, the media reported.

In an interview with The Times, Poonawalla said that everything falls on his shoulders when it comes to delivering the Covid vaccine to millions in India.

“I’m staying here (London) for an extended time because I don’t want to go back to that situation. Everything falls on my shoulders, but I can’t do it alone…I don’t want to be in a situation where you are just trying to do your job, and just because you can’t supply the needs of X, Y or Z, you really don’t want to guess what they are going to do,” Poonawalla told The Times.

Referring to the phone calls from some of the most powerful people in India to get them vaccines first, he added: “The level of expectation and aggression is really unprecedented. It’s overwhelming. Everyone feels they should get the vaccine. They can’t understand why anyone else should get it before them.”

India is facing an immense crunch of vaccines amid the lethal second Covid wave, and as the country started vaccination for people in the 18-44 age group in its third drive yesterday, several states are unable to start the immunisation drive because of the demand-supply gap.

The CEO of the Pune-based pharmaceutical company said that the company will make an official announcement to produce vaccines in London in the coming days.

“There’s going to be an announcement in the next few days,” he said.

Recently, SII had borrowed money from banks instead of waiting for the government’s aid to arrive to scale up the production of its Covishield vaccine.

The company assumed that the funding from the government will reach them very soon, probably by this week.

Covishield has been developed by the Oxford University and AstraZeneca and manufactured by the SII.

The government recently announced that it has given in-principle approval for credit to vaccine manufacturers, SII and Hyderabad-based Bharat Biotech, to boost India’s vaccine production in the wake of the huge surge in Covid-19 caseload.

The Union Finance Ministry has approved to sanction Rs 3,000 crore credit for SII and Rs 1,500 crore for Bharat Biotech.

Poonawalla had earlier suggested that the company would require around Rs 3,000 crore to increase production of Covid-19 vaccines.