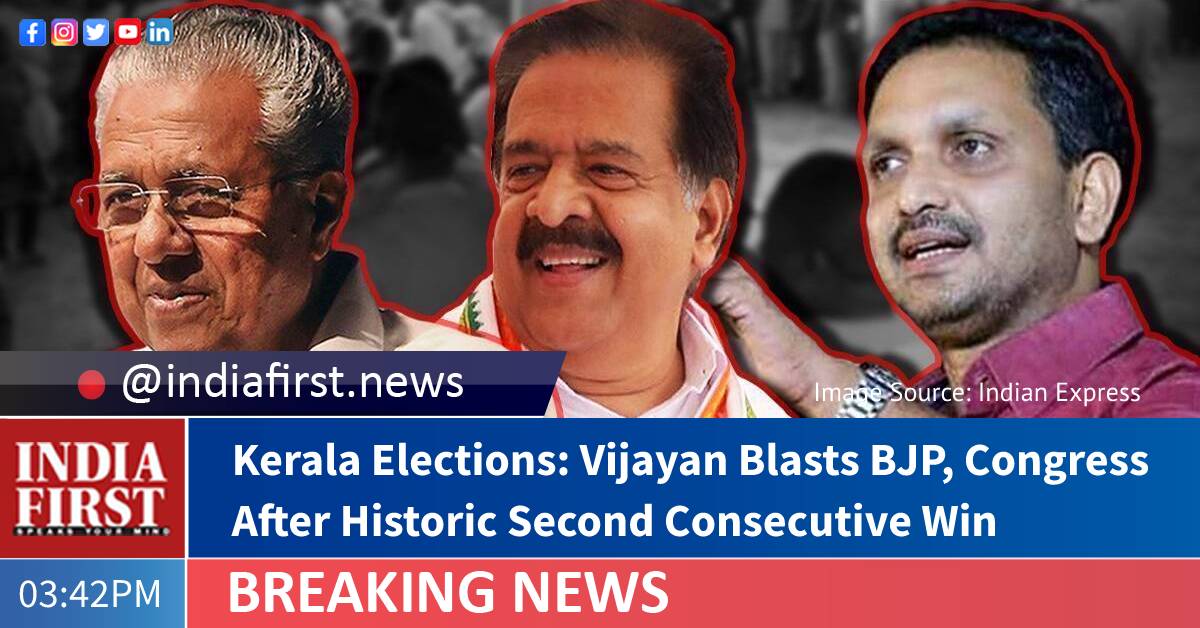 Kerala Chief Minister Pinarayi Vijayan, who broke a four-decade-old trend of one-term governments in the state as he led his Left Democratic Front to a successive second stint in power, yesterday dedicated the victory to the people and said they are humbled by the response of the people who supported them and this will be the booster to start work on building a resilient Kerala.

He also tore into the Congress-Led opposition, the BJP, as well as a section of the media.

Addressing the media at his home base in Kannur when the tally of the victory showed 99 seats for the Left, with the Congress-led Opposition ending up with 41 seats and the BJP which had one seat in the 2016 Assembly polls, failed to get any seat this time, a beaming Vijayan said: “I wish to state that this was a great political fight and this is no doubt a victory of the people and belongs to the people.

“All along after the elections was announced, I had mentioned what is in store and I also said why I have that confidence. Then, I said we believe in the people and people believe in us and that’s why I said we will win more seats than the last time. And it has happened and it happened with the help of the people who believed in our capabilities as they know, it is only the Left which can work for the welfare and also the development of the state.”

“We are deeply honoured by the support of the people who placed their full support on us and it was because of them that we were able to do this. We assure you the people that they can fully trust us and we see ‘power’ as not something to enjoy or to engage in corruption. We have a detailed manifesto which explains everything what we will do as we are one who will promise only what can be done,” he added.

Taking on the BJP, Vijayan said the state saw all its top leaders descend here for the campaign and heard what all was said.

“They even went to the extent of saying that they, without even having the need for the mandatory majority for forming a government, will form the government. When it came to money power, none could match them and what one could see was the ill-effects of having huge money. The victory also shows that our state is not a ground for communal elements like some states in the country,” he said.

Turning towards the Congress, he said the very existence of the Congress-led UDF is now under a cloud and this has to be discussed.

“Just see what happened when the state suffered a few disasters… what was the role of the Congress-led UDF. When the national agencies came calling here based on few allegations, instead of standing for the interest of the state, they were trying to attack us. The people saw all this and rightfully they did what any person would do and gave us their confidence. So in the best interest of the state, instead of joining hands for the progress of the state, the opposition was out to play spoil sport and the people acted,” said Vijayan.

He then made a blistering attack on a section of the ‘right wing’ media which was “wrongly portraying what we did”.

“Some media houses thought, that everything is under their control and at the tip of their pen. Lot of canards was being spread which were blatant lies and some even launched personal attacks. I wish to tell you (media) that the people know and gauge everything and you do not have any powers, which you think you have,” Vijayan said.

“The media should introspect and we will only be glad if you engage in constructive criticism, which in fact it will be good for us… But that is not what is happening. All what I have to say to you is it is time that you introspect and apply a course correction in the scheme of things that you do. All should understand that we are passing through tough times and hence priorities should be reworked,” he added.

Vijayan said today that he will submit his resignation to the Governor and then it would be the party which decides on when and how the next step is.