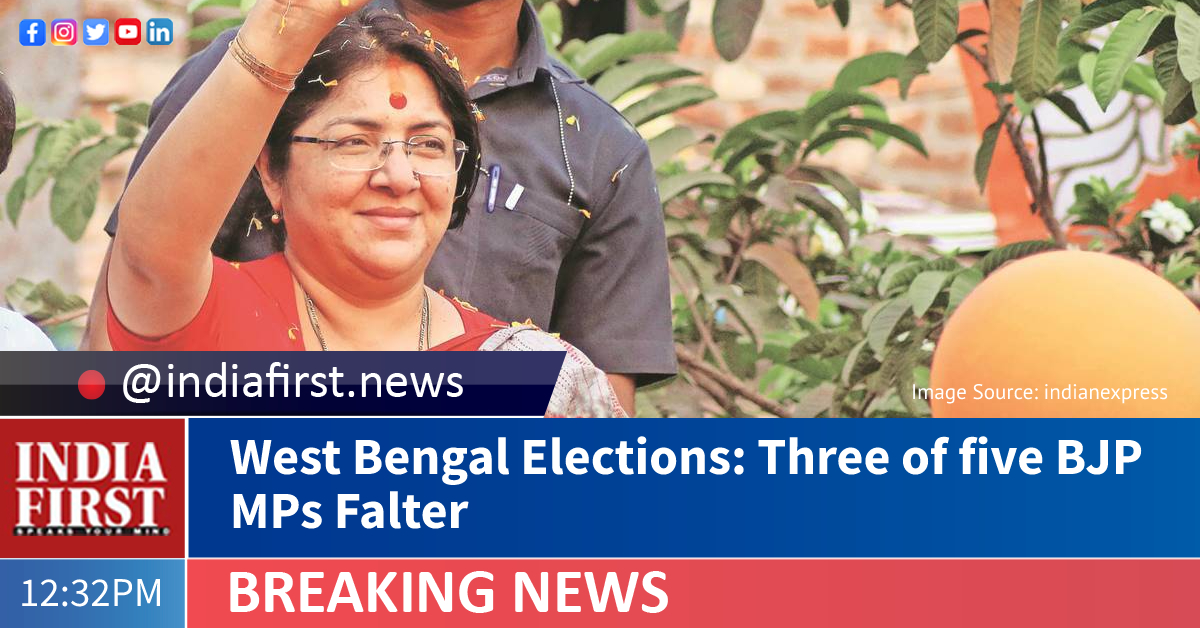 While the Trinamool Congress is close to attaining a three-fourth majority in the Assembly elections in West Bengal, three of the five heavyweights of the BJP have fallen prey to the deluge of the ruling party.

Star BJP candidates and MPs Swapan Dasgupta, Locket Chatterjee and Babul Supriyo have all lost in the elections, while MP Nisith Pramanik has won by a slender margin of 57 votes. Another Lok Sabha member of the BJP, Jagannath Sarkar, also won the elections.

While Nisith Pramanik won by a thin margin of 57 votes from Dinhata in Cooch Behar, Babul Supriyo, Locket Chatterjee and Swapan Dasgupta lost from Tollygunge, Chinsurah and Tarakeshwar, respectively.

Swapan Dasgupta, who contested from Tarakeshwar in Hooghly district and was being considered to be the face of Bengal BJP, lost to Ramendu Sinharay of Trinamool by a margin of 7,484 votes.

Similarly, Locket Chatterjee who had earlier won the Lok Sabha polls from Hooghly, lost to Asit Majumdar of the Trinamool in Chuchura by margin of 18,417 votes.

Babul Supriyo, who was elected to the Lok Sabha from Asansol, lost against Arup Biswas of Trinamool in Tollygunje by 50,080 votes.

In Dinhata, Pramanik beat Udayan Guha of the Trinamool by a thin margin of 57 votes, while in in Santipur in Nadia district, Sarkar defeated Trinamool’s Ajoy Dey by 15,878 votes.

“The results have been far below our expectations. But we have been able to emerge as the only opposition against the Trinamool in Bengal which is a milestone in our fight in the state. We hope to play the role of a responsible opposition in the Assembly. We have to accept that the people of Bengal have expressed their confidence in Mamata Banerjee. We congratulate her on her victory,” BJP leader Joyprakash Majumder said.