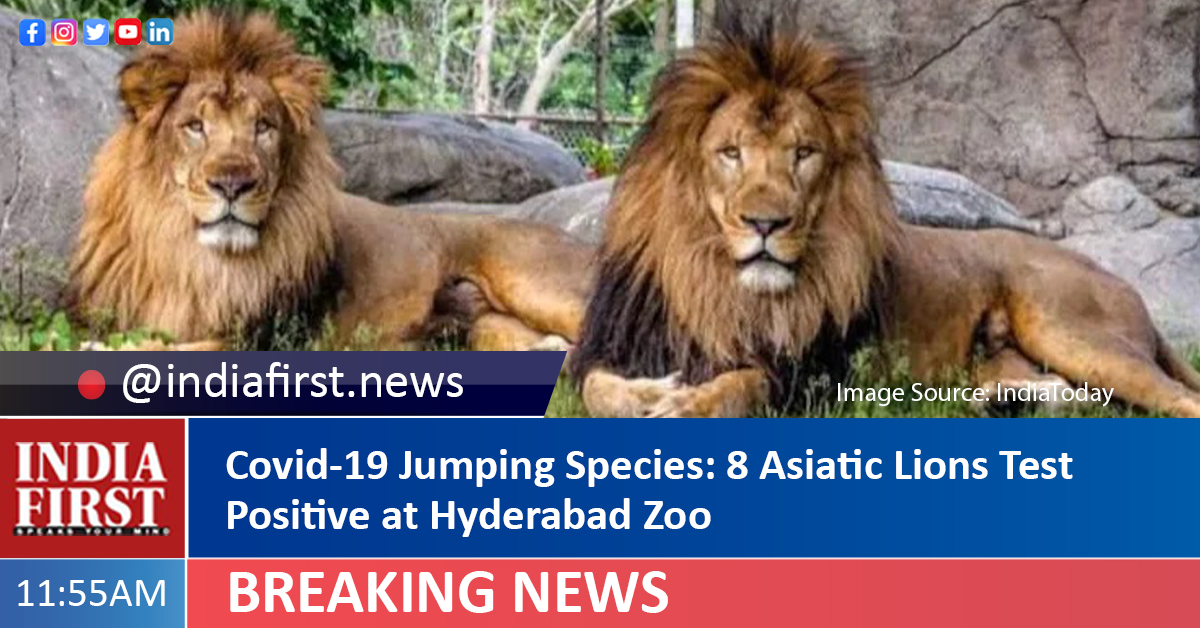 Eight Asiatic lions at the Nehru Zoological Park (NZP) in Hyderabad have tested Covid-19 positive, in what is believed to be the first case of human-to-animal transmission in India.

The Zoo reported the lions with mild respiratory distress. Based on the guidelines of the Central Zoo Authority, their nasal and oral discharge samples were collected and sent for tests to the Laboratory for Conservation of Endangered Species at CSIR-Centre for Cellular and Molecular Biology (LaCONES-CCMB). The samples were tested using RT-PCR, and found positive for coronavirus, the CCMB said yesterday.

The CCMB analysed the genomes of coronavirus samples from these lions, and did not find those to be a variant of concern.

“As and when we noticed symptoms of nasal discharge from the lions housed in the Lion Safari enclosures, we decided to send the samples for testing possibility of viral infection,” NZP Curator Subhadra Devi said.

“The lions have been now isolated at the zoo from other animals, and are receiving due care and necessary treatment. They are also responding well to the treatment and recovering,” APCCF and Director of Zoos, Dr S. Kukrety.

“Since the pandemic began, many zoos and animal farms have reported that their animals have gotten infected from humans. It is essential to strictly follow the safety regulations in Indian zoos in the current times to avoid transmitting the infection to the animals. We have to carefully document the different symptoms that coronavirus infection causes in animals as well as develop non-invasive ways to procure samples from animals. Getting swab samples from animals is very difficult,” LaCONES-CCMB’s Scientist-in-charge, Dr Karthikeyan Vasudevan, said.

India has four designated Covid-19 testing centres for captive animals, of which LaCONES-CCMB is one. “We are looking forward to now testing animal samples for coronavirus by testing their faecal samples. This can be a useful method of testing for both captive and free-ranging animals,” CCMB Advisor, Dr Rakesh Mishra, said.

“Looking for the spread of coronavirus in animals opens up an unchartered area of work for CCMB. And it is an emerging requirement for managing the pandemic,” CCMB Director-in-Charge, Dr Virendra Tiwari, said.

The samples of eight lions including four females were sent for analysis after the zoo staff noticed that they developed symptoms like nasal discharge, cough and loss of appetite.

The NZP, one of the major zoos in Asia, has 12 lions in the 40-acre safari. The authorities were taking various measures to contain the spread of virus among other animals.

The zoo was shut down two days ago after the Central Zoo Authority decided to close down all national parks, sanctuaries and tiger reserves as a precautionary measure to check transmission of the virus from humans to animals.

Following reports of a tiger at a New York Zoo testing positive for Covid-19 in April last year, the NZP had sounded an alert.

The animal keepers and veterinary staff were alerted to monitor animals, particularly tigers and primates, for any symptoms of flu.

As part of precautionary measures, thermal scanning of about 150 zoo employees, engaged in taking care of animals, was being dome.

The authorities had been taking several preventive prophylactic measures since the outbreak of the pandemic in March last year.

The zoo had reopened in October last year after remaining close for nearly seven months due to the pandemic.

Spread over 300 acres, the NZP is home to nearly 181 indigenous and exotic species, including 1,716 animals, birds, and reptiles.

Known as one of the best zoos in Asia, it attracts around 30 lakh visitors annually.