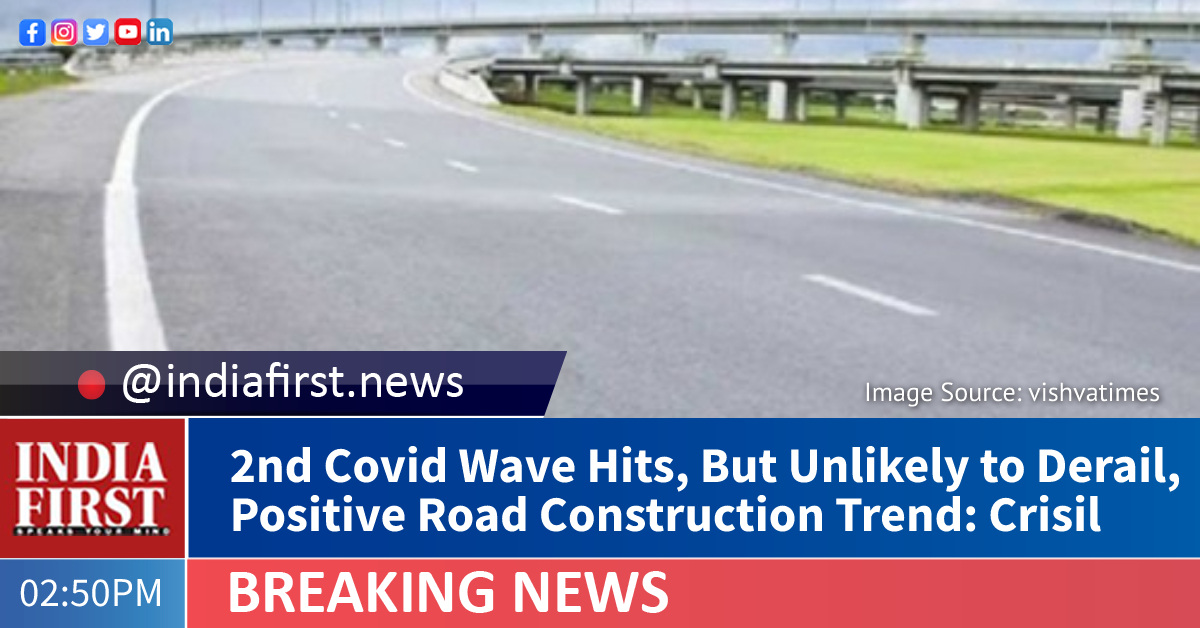 Last fiscal, the national highways sector thumbed a nose at Covid-19 and delivered a stellar performance, riding on higher project awards, record construction, and traffic that surpassed pre-pandemic levels once the lockdowns were lifted in the second half.

Though the second wave of infections has dampened this momentum, it may not have a material bearing on growth for the current fiscal, Crisil said in research report today.

Lower National Highway (NH) awards of only 311 km in April 2021 are unlikely to deter the government from awarding more projects for the full fiscal as ramp-up typically occurs in the fourth quarter, the report added.

A decline in national highway construction to 853 km in April from the peak of 2,189 km in March may seem like a 61% nosedive. But this translates into a decent pace of 28 km per day, or 4x times faster than the April 2020 levels, despite endemic labour shortage.

Road engineering, procurement and construction (EPC) contractors also have learnings from the first wave so scaling up can happen once the economy opens up again, just the way it did last fiscal, the report said.

The less-stringent, localised lockdowns this time around have had a softer impact on national highway traffic, which saw only a 15% decline in April, month-on-month. This was supported by the implementation of FASTag, which eliminated toll leakages.

The National Highways Authority of India (NHAI) awarded projects totaling 4,818 km last fiscal – a three-fiscal high – underscoring the government’s sharp focus on the infrastructure sector. Favourable changes in the build-operate-transfer (BOT) and hybrid annuity model (HAM) agreements, and relaxation of bidder eligibility criteria indicated a clear policy shift last fiscal to improve private-sector participation. The trend is expected to continue this fiscal as developers will be able to free up capital through stake sales, Crisil said.

Developers made up for lost time and construction at NHAI projects rose 5% year-on-year last fiscal. Given the acceleration in project awards, sharper focus on resolving land acquisition issues, and the ‘Atmanirbhar Bharat’ initiatives to ease liquidity for road EPC players, the pace of construction should continue to increase steadily.

Crisil said that the median rating for large players is A-, while that for small ones is BBB-.

HAM project developers saw an average delay of 3-4 months in achieving financial closure compared with the stipulated time. But the 37% completed projects – awarded over fiscals 2016-18 – have been largely executed on time. About 55-60% of these were executed six months ahead of schedule on average, while the rest lagged by the same amount of time.

Land acquisition issues have persisted even before the pandemic. As many as 35-40% of the projects were granted the appointed date 16 months after the project award and a few were terminated before it because of land-related glitches.

As many as 45-50% of under-construction projects that were awarded between fiscals 2016 and 2018 are delayed by 8-9 months on average, beyond their scheduled completion date (SCOD), largely because of de- scoping/delinking, and financing issues pertaining to a few developers.

A large chunk 66% of the projects awarded over fiscals 2019-2021 – are yet to commence construction awaiting financial closures and appointed dates. The under-construction projects face labour issues following the pandemic. The government’s steps to extend milestones and SCODs ranging from 3-6 months provides them with the needed cushion.