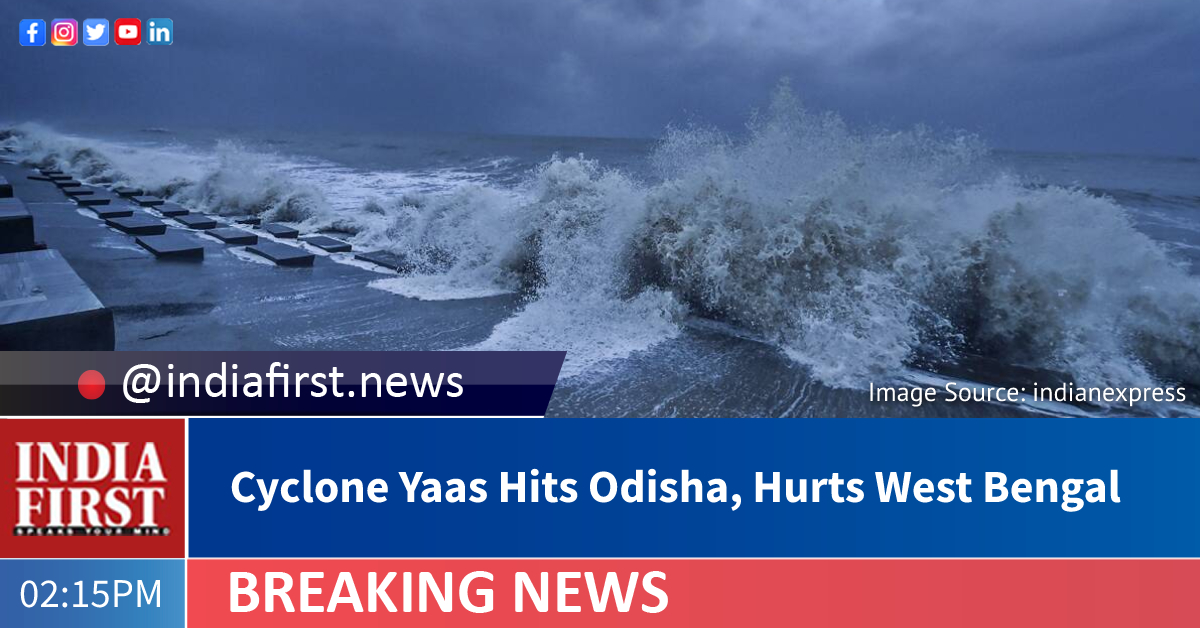 The much-dreaded landfall of very severe cyclonic storm Yaas began south of Balasore in Odisha at 9.15 am today and the process was expected to be continue for 3 to 3.5 hours.

West Bengal Chief Minister Mamata Banerjee who is monitoring the storm personally has informed that many places in East Midnapore and South 24 Parganas districts have been damaged or flooded because of the effect of the storm.

“The much-awaited landfall process of the severe cyclonic storm finally started at 9.15 am. It has touched the coast at the south of Balasore and will be crossing the land in between Dhamra and Balsore in Odisha.

“The wind speed of the storm was around 130 km/hr to 140 km/hr at the time of landfall and it is likely to increase slightly when the tail crosses the land,” Regional Director (Eastern Region) of Indian Meteorological centre Sanjib Bandopadhyay told reporters.

The landfall has created widespread damage in different areas of East Midnapore and the coastal areas of South 24 Parganas. Chief minister Mamata Banerjee who has been in the control room all through the night and has been monitoring the storm personally said, “We have evacuated more than 15 lakh people and the process of evacuation is still on”.

“There have been widespread damages in Digha, Shankarpur, Tajpur and Mandarmani in East Midnapore and at least 15 places including Gosaba, Basanti, Kultali, Namkhana, Sagar, Joynagar, Frazergunj and Patharpratima in South 24 Parganas.

“More than 70 kilometres of embankment have been fully or partially damaged in East Midnapore. Water from different rivers like Bidyadhari, Haldi is entering into the villages and many villages have been inundated,” the Chief Minister said.

Seventeen companies of the army have been pressed into action in 10 districts across the state. “The army is equipped with boats, life jackets, ambulances, medicines, and cutters to combat any kind of eventuality. The army is being assisted by teams from the Power and Telecom departments.

“Indian Navy has also been kept on standby to provide adequate support to the state administration. Helicopters are kept ready to airlift in case they are caught in the midst of the natural calamity.

According to government estimates more than 2,000 houses have been damaged and 51 embankments along the coastline of East Midnapore and South 24 Parganas have been destroyed allowing the sea water to enter into the land.

“This will not only flood the villages but cause huge damage to agriculture as well. “Though Kolkata has been safe till now but due to high tide it is likely that there will be waterlogging in the city as well. We have closed all the flyovers as a precautionary measure,” Mamata Banerjee said.