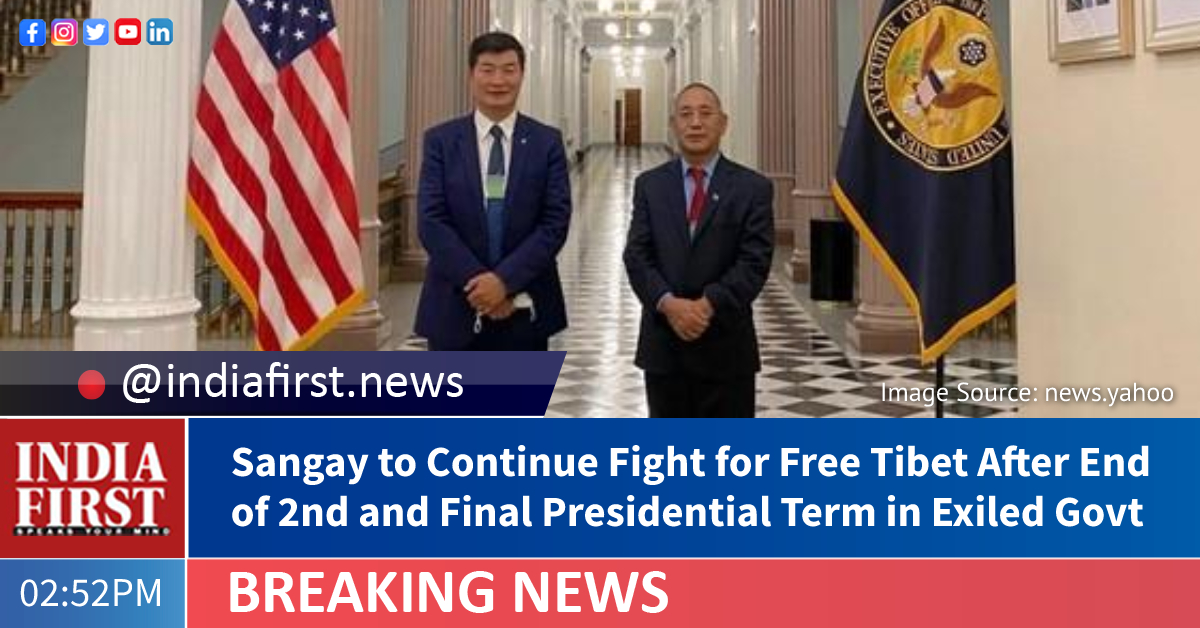 Central Tibetan Administration (CTA) President Lobsang Sangay, who held the post for two consecutive terms that ended yesterday, said “his role ends but his resolve to fight for the Tibetan cause will continue and will remain strong forever”.

“In the past few weeks, so many people and organisations from different countries, including the US, Canada, the UK, Italy, Japan, South Africa, and India, have graciously held farewell events to thank me for my 10 years of service. Now, it is my turn to say thank you,” he said.

Former Speaker of Tibetan Parliament-in-exile and experienced administrator Penpa Tsering will be the next President of government-in-exile, and is going to be sworn in an official ceremony at the CTA headquarters in Dharamsala today.

Thanking his fellow Tibetans for their unwavering support and prayers, Sangay said: “You gave me the opportunity to fulfill my late father’s last words, which were to be of service to our root guru, His Holiness the Great 14th Dalai Lama of Tibet, and to work for the cause of our occupied nation.”

“When I reflect on my life, I am overwhelmed with a profound sense of gratitude to His Holiness, the Dalai Lama. No part of the journey that took a child from a tiny refugee community in Darjeeling and led him eventually to assume the title of the first-ever Sikyong (President) would have been remotely possible without the efforts, wisdom, and great vision of His Holiness,” he added.

Sangay also said: “Over the last decade or so, we have witnessed China’s increasing power, and an escalating belligerence in refusing to engage in any discussion about human rights and democracy.

“From my official visits as the Sikyong, I have experienced first-hand the effects of the Chinese government’s pressure on governments across the world to distance themselves from the CTA, which China accuses as being a ‘splittist’ organisation.”

He cited the enormous pressure exerted by the Chinese government resulted in last minute cancellations of his meetings or downgrading the contact to lower-ranking officials.

“Finally, during the last months of my term, I was able to visit the US State Department and the White House as the Sikyong of the CTA, and as the legitimate representative of the Tibetan people. These developments, along with the passage of the Tibetan Policy and Support Act of 2020 by the US Congress, mark a new turn in the relationship between the US and the CTA. I hope our relations with other countries take a similar turn.”

Sangay also said he was committed to ensuring the smooth transition of power to President-elect Tsering. “It is the responsibility of every Tibetan to support him in his global advocacy efforts for Tibet and the Tibetan people. I wish the incoming Sikyong and his Kashag all the best.”

Expressing gratitude to India, he said: “The story of the Tibetan freedom struggle is incomplete without acknowledging India, our closest friend.”

About his future plans, Sangay, 52, said he said he would now be spending more time with his family, especially with his daughter, and learning how to beat “her at our new favourite online game”.