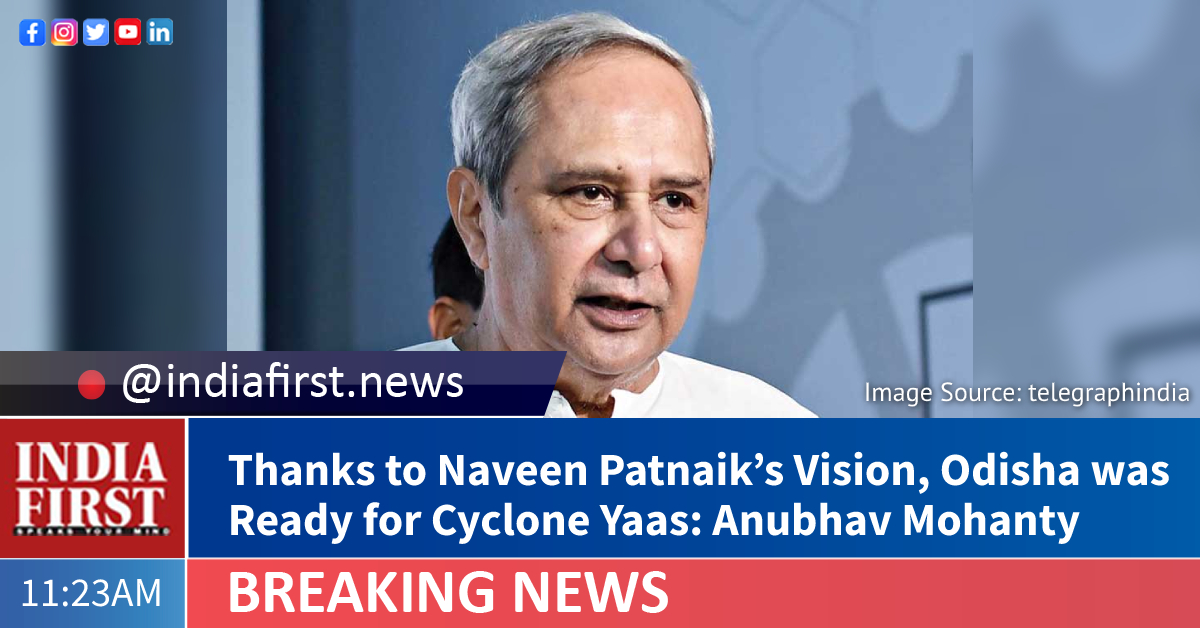 The Ollywood star-cum-Lok Sabha MP from Kendrapara has let in on how he been following in the footsteps of the five-time Chief Minister and BJD supremo on the disaster management front.

The mobile phone of Anubhav Mohanty, the Lok Sabha MP from Kendrapara in Odisha, has not stopped ringing for the last few days, as he has shared his personal contact with the people as a helpline number in view of Cyclone Yaas, which made a landfall in Odisha yesterday morning.

The Biju Janata Dal (BJD) MP has barely slept in the last three days as he has been supervising the evacuation process and also arranging dry as well as cooked food for the people evacuated from the coastal areas to safer places.

Mohanty, who is also a leading actor in Odia films, said that due to the vision of Chief Minister Naveen Patnaik, the state was well-prepared to deal with Cyclone Yaas.

He said, “I have shared my own mobile number and email ID with the people, so that they contact me directly in case of any emergency. I am myself monitoring the entire operation and handling all the requests that are coming to my helpline number. Along with my team, I am following up with the government officials.”

Mohanty said that he has received more than 800 calls and over 1,000 messages on his helpline.

Highlighting the rescue operations in his constituency, the BJD leader said, “Evacuation of people started two to three days before the cyclone made a landfall. I had held a review and preparedness meeting on May 22 with all the MLAs, district officials and everyone was instructed that we have to save every single life.”

“We were very clear as Kendrapara is not a region that has been hit by the cyclone for the first time. This district has faced cyclones several times. This is the third cyclonic storm in the area since I became an MP in 2019,” Mohanty added.

He also said that Odisha was well-prepared for the cyclone.

“In my constituency, we had evacuated people completely. A few queries and help calls came on our helpline today, which were attended to with the help of government officials and volunteers. By now, 1,05,000 people have been evacuated and no casualty has been reported in Kendrapara so far,” he said.

Mohanty said that to carry out relief and rescue operations in his constituency, 22 teams of ORDRAF, NDRF and several other government agencies are working on a war footing.

“It was a special instruction from the Chief Minister that pregnant women should not face any hurdles, especially looking at the Covid situation. So pregnant women were shifted to CHCs and SDHs prior to the cyclone, while all Covid positive patients were kept in separate Covid care centres,” the MP said.

Mohanty said that damage assessment has already begun and it is almost completed in all areas.

“Dry food as well as cooked food items are being provided to the people in several parts of the state. Arrangements have been made for doctors and medicines, including nine teams of veterinary doctors. By Tuesday evening, more than 90 MT of cattle feed was available in my constituency,” Mohanty pointed out.

When pointed out that Odisha has been at the forefront in dealing with cyclones, as it had managed to reduce the casualties during Cyclone Amphan with the Chief Minister getting appreciation from several political leaders, Mohanty said, “I still remember when a super cyclone had hit Odisha in 1999. I was a child then. After the devastation, people of the state had to live without electricity and proper drinking water for several days as Odisha was not prepared enough to deal with such natural calamities.

“But now we are self-sufficient because of Naveen Patnaik and his extraordinary vision. I feel as if he has mastered the art of disaster management,” he said, adding that Patnaik had given clear instructions to the officials that treatment of no Covid patient treatment should be hampered, oxygen supply within and outside the state should not be interrupted, pregnant women should not be affected.

He said Patnaik had also cancelled all the leaves of government officials and police personnel. Even the public representatives were given charge of several works in their constituencies.

“We have built many shelter houses in Odisha, and nearly 600 shelter homes are in use in Kendrapara. And due to the shelter homes, it became easy for us to evacuate people and keep them at a safe place,” Mohanty said.

“I had also started a kitchen to serve food to the people. So I thought of continuing with the idea, as people get worried during such natural calamities. So we set up a team with more people, and I am personally overseeing that the calls for assistance are addressed on time. We are also using technology more constructively and intelligently.”