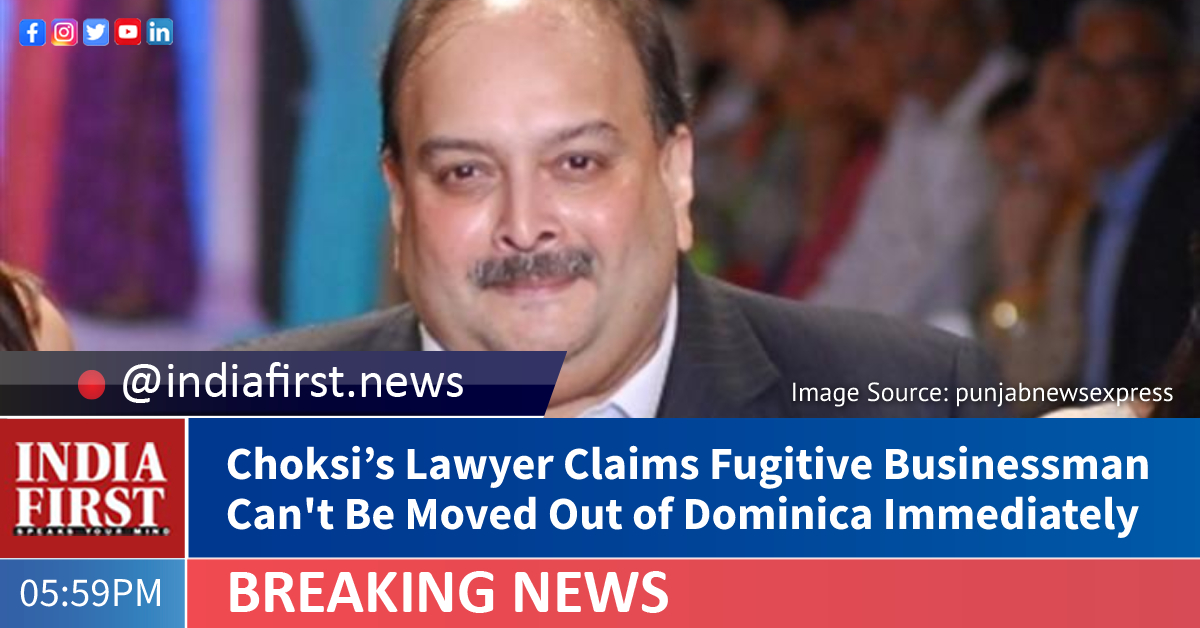 Fugitive businessman Mehul Choksi cannot be moved out Dominica until further orders, a court said while hearing the petition of the businessman, who was captured in Dominica on May 26.

Choksi is wanted in India by the CBI and the ED in Rs 13,500 crore Punjab National Bank (PNB) fraud case. He had gone missing from Antigua and Barbuda on Sunday, sparking a massive manhunt. He was captured in Dominica on Wednesday.

Choksi’s lawyer Vijay Agarwal said: “Upon filing of habeas corpus petition titled Mehul Choksi versus Attorney general of Commonwealth of Dominica and chief of police, Dominica court has ordered a restraint on removing Choksi from the land of Dominica until further order.”

He said that the Dominica court has also permitted legal assistance and access to lawyers to Choksi.

Agarwal said that the matter was scheduled to be heard today morning in Dominica.

Last night, Agarwal had said Choksi was forced to get into a vessel from Antigua and he was taken to Dominica.

He also claimed that Choksi was kept there and then on May 24 he was taken to the police station but the news of his arrest was broken only on May 26 and there are marks on his body of the force.

The advocate said: “Choksi has narrated his horrifying experience which is an eye-opener and vindicates my stand that he would not have gone from Antigua voluntarily. Choksi has said that he was forced to get into a vessel from Jolly Harbor in Antigua and he was taken to Dominica.”

Agarwal also said that Choksi was kept there, and then on Monday he was taken to the police station. Since then he has been there and this news to the world was broken only on Wednesday.

He claimed that there are marks on Choksi’s body of the force.

“There is something fishy and I guess it was a strategy to take him to another place so that there are chances of sending him back to India. So I don’t know what forces are operating. time will tell,” he said.

On May 26, Antigua and Barbuda Prime Minister Gaston Browne said that the fugitive diamantaire “needs to return to India” where he can face the criminal charges levelled against him.

Antigua News Room, a media outlet, quoted Browne as telling journalists in Antigua and Barbuda: “We asked them not to repatriate him to Antigua. He needs to return to India where he can face the criminal charges levelled against him.”

Choksi, an accused in the over Rs 13,500 crore PNB fraud case along with his nephew Nirav Modi, has been residing in Antigua and Berbuda since January 4, 2018.

The CBI and ED, which have filed separate chargesheets in the case, are trying for the extradition of Choksi.