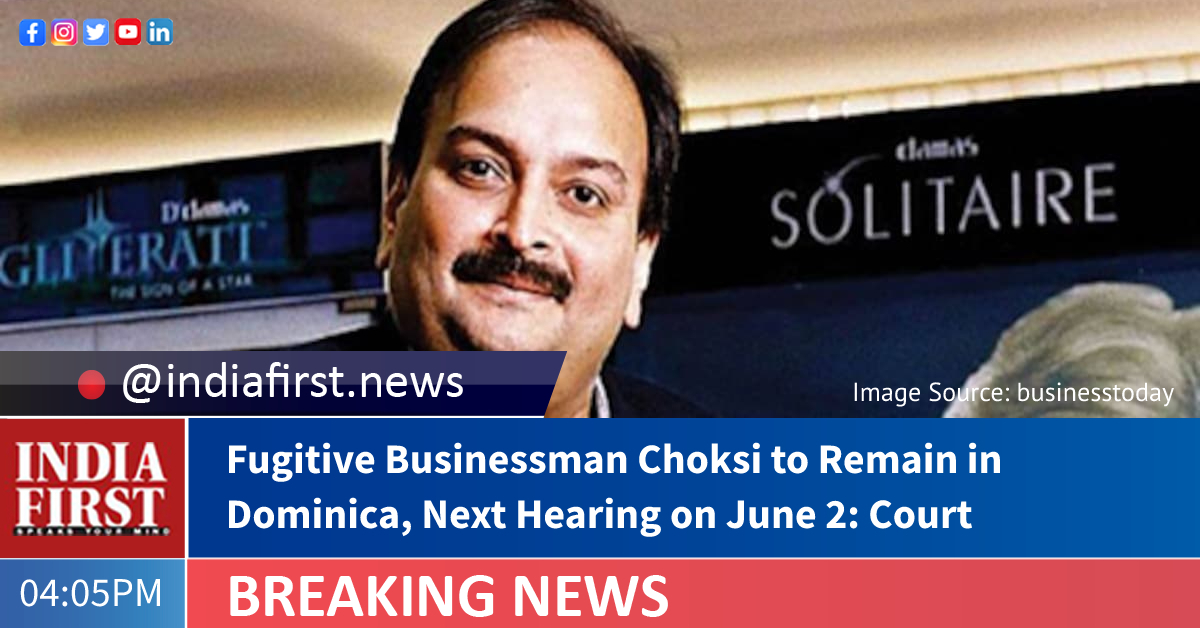 The High Court of Dominica has once again “restrained” the extradition of fugitive businessman Mehul Choksi, who is wanted in India in Rs 13,500 crore Punjab National Bank (PNB) fraud case.

The next hearing of the case is scheduled for June 2.

The court’s decision came while it was hearing a habeas corpus plea filed by Choksi’s lawyers.

The Dominican court further stated that Choksi “must be taken transported to the Dominica China Friendship Hospital for medical attention and the administration of a Covid-19 test”.

It asked the respondents (the Attorney General and the Chief of Police) to file their affidavits by 10.30 on June 1, and the applicant (Choksi) to file an affidavit in reply, if necessary, on or before 3.30 p.m. that day.

Choksi, who is wanted in India by the CBI and the ED for the Rs 13,500 crore PNB loan fraud case, went missing from Antigua and Barbuda on Sunday, sparking a massive manhunt. He was captured in Dominica on May 23.

Earlier in the day, Choksi’s lawyer in India, Vijay Agarwal, said: “Upon the filing of the habeas corpus petition titled ‘Mehul Choksi vs Attorney General of Commonwealth of Dominica and Chief of Police’, a Dominica court has ordered a restraint on removing Choksi from the land of Dominica until further order.”

On May 27 night, Agarwal had said that Choksi was forced to get into a vessel from Antigua and was taken to Dominica. He also claimed that there were marks on Choksi’s body, implying the use of force.

“There is something fishy and I guess it was a strategy to take him to another place so that there are chances of sending him back to India. So I don’t know what forces are operating. The time will tell,” he had said.

However, Antigua Police Commissioner Atlee Rodney has rubbished the claims of Choksi’s counsel and said that they have no information on him being forcefully removed.

Choksi, an accused in the PNB loan fraud case along with his nephew Nirav Modi, has been residing in Antigua and Barbuda since January 4, 2018. The CBI and ED, which have filed separate chargesheets in the case, are trying for the extradition of Choksi.