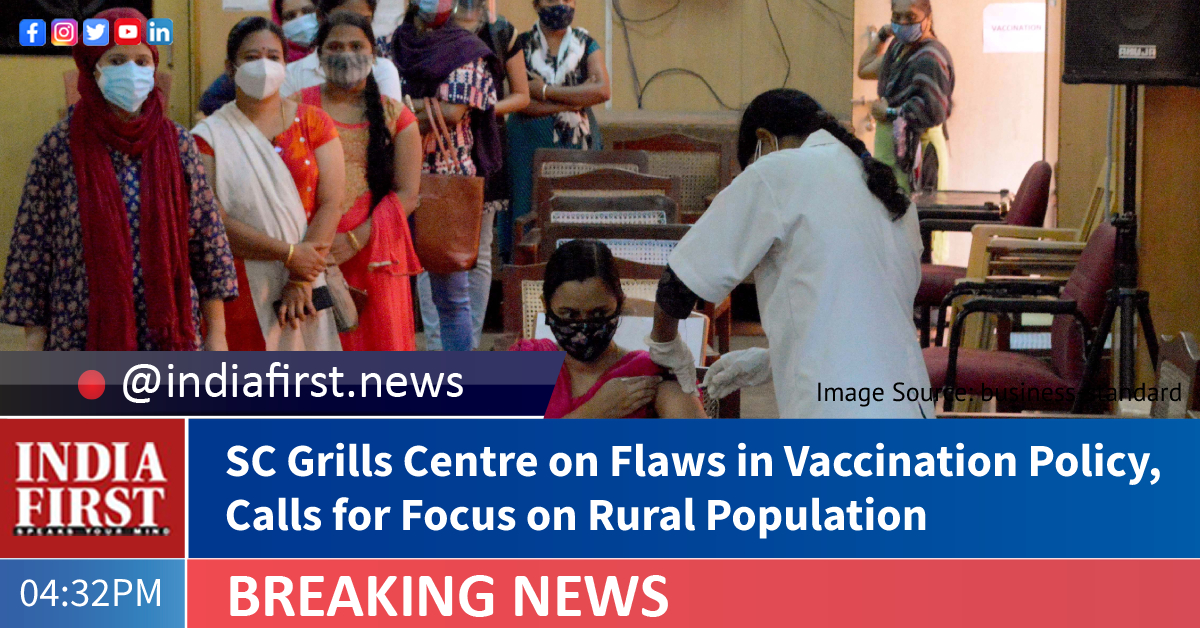 The Supreme Court has shot a volley of tough questions at the Centre in connection with its Covid vaccine policy, and flagged various flaws: shortage of vaccine doses, pricing issues, registration for vaccination and lack of vaccine especially for the rural areas in the country.

A bench headed by Justice D.Y. Chandrachud was informed by the Centre that it expects to vaccinate all by the end of December 2021. The bench also comprising L. Nageswara Rao and S. Ravindra Bhat cited the discrepancy in the supply of vaccine for different age groups.

Justice Bhat queried Solicitor General Tushar Mehta, representing the Centre, what is the rationale for dual policy? Centre is procuring certain amount and not willing to give it to states at some rate?

Justice Chandrachud noted that for the population above 45 years, procurement is by Centre as of May 1, and for below 45, 50 percent to states is by manufacturers on pro rata basis. He further queried “The price is determined by Centre. What is the basis for Centre to say that for 45 and above we will supply and procure vaccines free of charge and for below 45 states will have logistical arrangements?”

The bench told the Centre’s counsel that government’s rationale was high mortality in 45+ group, but in the second wave this group is not seriously affected, instead it was 18-44 age group. The bench added, “If purpose is to procure vaccines, why should the Centre procure only for over 45?”

The bench also asked the Centre, why it has left it to manufacturers to fix price of vaccines, and stressed that Centre has to take over responsibility of one price for the nation. The top court added, why states had to pay more for the vaccines than the Centre.

The bench told the Centre that policymakers must have their ears on ground, and told Mehta “You keep on saying digital India but the situation is actually different in rural areas. How will an illiterate labourer, from Jharkhand get registered in Rajasthan? Tell us how you will address this digital divide.”

Mehta replied registration is mandatory as person needs to be traced for the second dose, and for rural areas, there are community centres for the purpose of registration for the vaccination. The bench asked Mehta to place the policy document on record, as it queried on the viability of the process.

Justice Chandrachud told the Centre that the court wants it to “smell the coffee” and realise what is happening in the country and make the necessary amendments. The top court gave two weeks to the Centre to file its response on these concerns.

According to Centre’s new “liberalised” policy, states can buy up to 50 per cent of their vaccine needs from manufacturers, although at higher prices than that fixed by it. And, private hospitals have to pay even higher prices. This differential pricing sparked a political uproar, where the Opposition reminding it of its “one nation, one price” war cry.