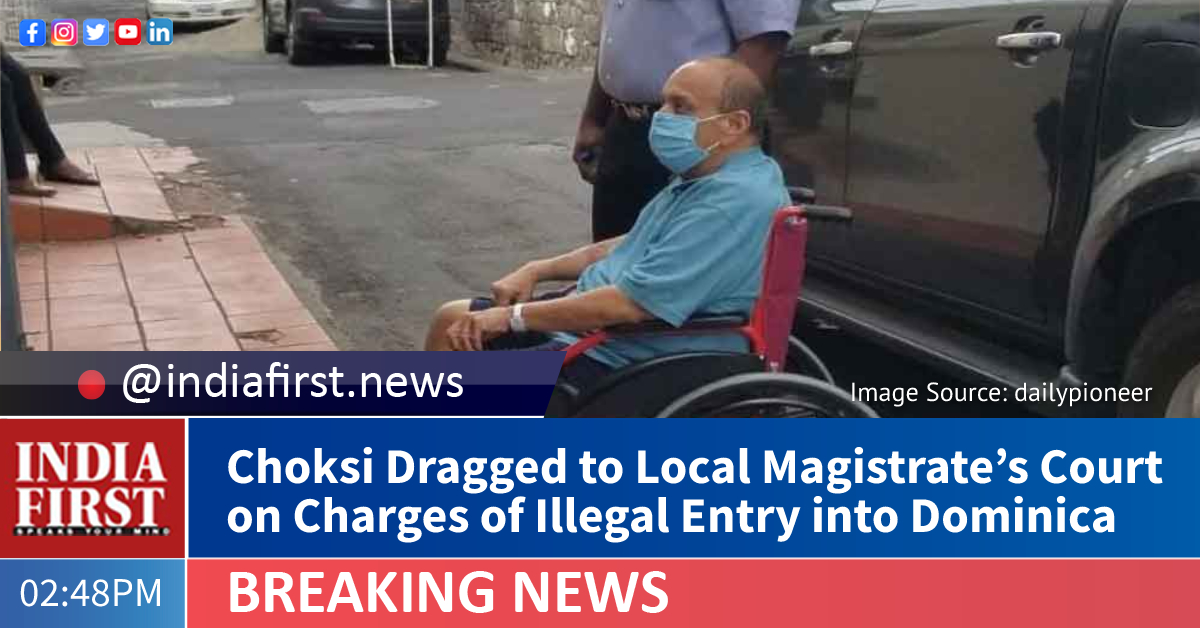 Fugitive diamantaire Mehul Choksi has been produced before a local Magistrate in Dominica to answer charges of his illegal entry into the island country following a court order.

Choksi appeared before the magistrate on a wheelchair.

Earlier yesterday, the Dominica High Court ruled that Choksi, who is wanted in India in the Rs 13,500 crore Punjab National Bank (PNB) fraud case, must be brought before a local magistrate to face charges of illegal entry.

According to people familiar with the matter, Justice Bernie Stephenson ruled that Choksi is to face charges of illegal entry into Dominica.

Meanwhile, Antigua News Room, a media outlet based in the Caribbean nation, reported that the matter was brought before the court on May 31 and after deliberations for just over three hours, the judge ruled that the application of habeas corpus be adjourned until 9 a.m. today.

Meanwhile, the Dominican Public Prosecution Service has told the court that Choksi should be deported to India as his plea is not maintainable.

Opposing the Dominican Public Prosecution, Choksi’s legal team contended that he is not a citizen of India as Article 9 of the Indian Constitution states that any person who acquires citizenship of a foreign country will automatically cease to be an Indian citizen, and he cannot be directly repatriated to India.

The court will be hearing the matter once again today.

Choski is undergoing treatment at the China friendship hospital since last week.

Earlier in the day, Stephenson started hearing submissions from lawyers representing Choksi and the police in Dominica.

Meanwhile, Choksi’s lawyer in India, Vijay Agarwal said: “Only question before the court is that whether he entered Dominica illegally or not, whether he is liable to be detained, whether Dominican police have the right to keep him in custody.”

Agarwal also contended that how shall he be deported is not a question before the court.

Choksi had gone missing from Antigua and Barbuda on May 23 sparking a massive manhunt. He was captured in Dominica on May 26.

Earlier in the day, Choksi had told an Indian news outlet that he was abducted by Indian agents and was given shock with a Taser gun whenever he resisted. He also alleged that he was beaten up by the officials.

In a statement to Business Standard newspaper, Choksi said that he was abducted from the Caribbean island of Antigua on the night of May 23 from where he was forcibly taken on a boat to the island of Dominica.

On May 27, first pictures of Choksi emerged online, showing several signs of bruises on his arms and a swollen eye.

“Choksi was forced to get into a vessel from Antigua and was taken to Dominica,” Agarwal had said. He also claimed that there were marks on Choksi’s body, implying the use of force.

“There is something fishy and I guess it was a strategy to take him to another place so that there are chances of sending him back to India. So I don’t know what forces are operating … Time will tell,” he had said.

However, Antigua Police Commissioner Atlee Rodney has dismissed the claims of Choksi’s counsel and said that they have no information on him being forcefully removed. An eight-member team of Indian officials has also landed in Dominica on a private jet for the extradition of Choksi.

A Dominican court has restrained the extradition of Choksi till further orders by hearing the habeas corpus plea filed by his lawyers.

Choksi is wanted in India by the Central Bureau of Investigation (CBI) and the Enforcement Directorate (ED) in connection with the Rs 13,500 crore Punjab National Bank (PNB) loan fraud case. He had shifted to Antigua in January 2018, days before the CBI registered a case.