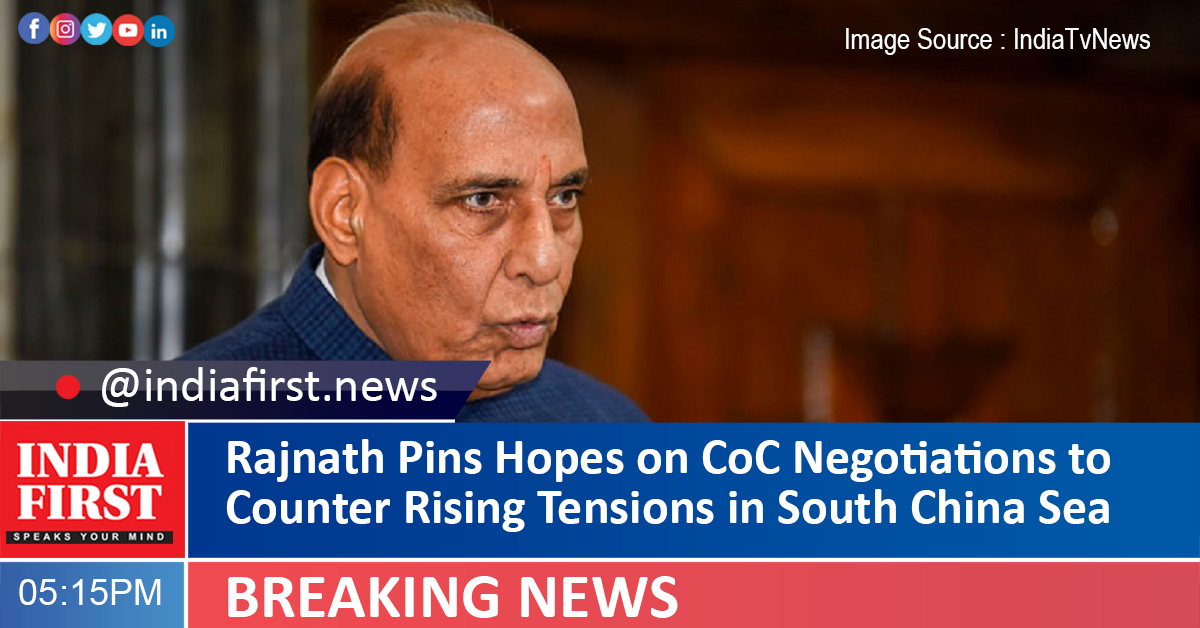 Defence Minister Rajnath Singh today said that the Code of Conduct negotiations will lead to positive outcomes in the South China Sea as tension escalated in the waters, causing concern all the nations in the region and beyond.

The minister asserted that India supports freedom of navigation, over flight, and unimpeded commerce in these international waterways.

China’s sweeping claims of sovereignty over the sea have antagonized competing claimants Brunei, Indonesia, Malaysia, the Philippines, Taiwan, and Vietnam.

Earlier this month, Malaysia scrambled jets to intercept Chinese aircraft it accused of breaching its airspace.

The Philippines has protested against the persistent presence of Chinese vessels in its economic zone,. Seeing threats from China, Vietnam expanded its maritime forces and Indonesia decided to bolster its Navy.

Addressing the 8th meeting of defense ministers from the Association of Southeast Asian Nations (ASEAN), Singh said India calls for a free, open and inclusive order in the Indo-Pacific, based upon respect for sovereignty and territorial integrity of nations, peaceful resolution of disputes through dialogue and adherence to international rules and laws.

The ministers gathered online for a meeting hosted by Brunei, this year’s ASEAN chair.

“India has strengthened its cooperative engagements in the Indo-Pacific based on converging visions and values for promotion of peace, stability, and prosperity in the region,” the minister said.

Premised upon the centrality of ASEAN, India supports utilization of ASEAN-led mechanisms as important platforms for implementation of our shared vision for the Indo-Pacific, he asserted.

India’s engagement with the South East Asian region, of which ASEAN has been a primary component, is based on its ‘Act East Policy’ announced by Prime Minister Narendra Modi in November 2014.

Key elements of this policy are to promote economic cooperation, cultural ties and develop strategic relationships with countries in the Indo-Pacific region through continuous engagement at bilateral, regional and multilateral levels.

“Maritime security challenges are another area of concern to India,” the minister said.

The sea lanes of communication are critical for peace, stability, prosperity and development of the Indo-Pacific region. In this regard, developments in the South China Sea have attracted attention in the region and beyond, Singh said.

“India supports freedom of navigation, over flight, and unimpeded commerce in these international waterways,” he said.

India hopes that the Code of Conduct negotiations will lead to outcomes that are in keeping with international law, including the United Nations Convention on the Law of the Sea (UNCLOS) and do not prejudice the legitimate rights and interests of nations that are not party to these discussions.

The minister also spoke about terrorism and cyber threats during his address to his counterparts.

Talking about terrorism, Singh said terrorism and radicalization are the gravest threats to peace and security that the world is facing today.

India shares global concerns about terrorism and believes that, in an era when networking amongst terrorists is reaching alarming proportions, only through collective cooperation can the terror organizations and their networks be fully disrupted, the perpetrators identified and held accountable, and strong measures be undertaken against those who encourage, support and finance terrorism and provide sanctuary to terrorists.

“As a member of the Financial Action Task Force (FATF), India remains committed to combat financing of terrorism,” the minister said.

Cyber threats loom large as demonstrated by incidents of ransomware, Wannacry attacks and crypto currency thefts and are a cause of concern.

A multi-stakeholder approach, guided by democratic values, with a governance structure that is open and inclusive and a secure, open and stable internet with due respect to sovereignty of countries, would drive the future of cyberspace.

He also said that India shares a deep connect with ASEAN and has continued its active engagement in many areas contributing to regional peace and stability, particularly through ASEAN-led mechanisms.