Class 12 Results to be Out by July 31 as CBSE’s 30:30:40 Assessment Formula Gets SC Nod | India First e Newspaper Skip to navigation Skip to content 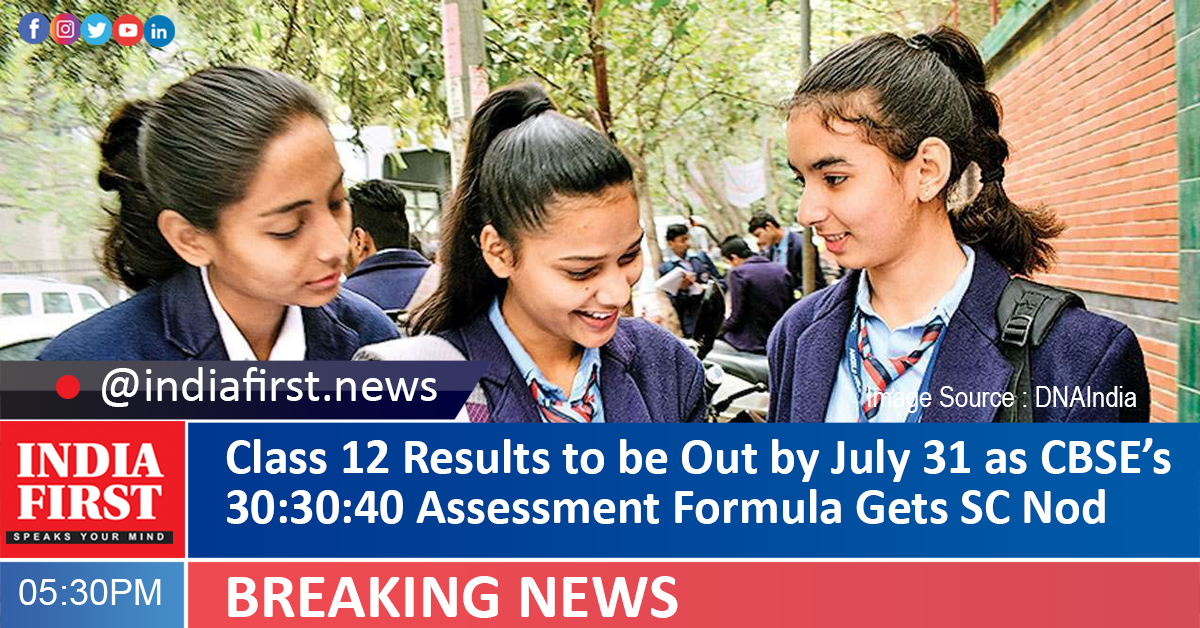 The Supreme Court has accepted the Central Board of Secondary Education (CBSE) formula for the assessment of Class 12 students.

The CBSE, in an affidavit, informed a bench headed by Justice A.M. Khanwilkar and comprising Justice Dinesh Maheshwari that the performance of the students in Class 11 and Class 10 exams will also be factored in while making the assessments for Class 12 students.

The CBSE informed the top court that results for Class 12 will be declared by July 31.

Attorney General K.K. Venugopal, representing the CBSE, contended that for Class 12, the marks will be based on unit test/mid-term/pre-board exam and 40 per cent weightage will be given. He added that the total marks awarded should be in consonance with the past performance of the school in Class 12 board examinations. The CBSE finalized the formula after obtaining feedback from 229 Sahodaya School Complex comprising of 7,734 schools and a 13-member committee of experts, comprising of IAS officers and education experts, constituted on June 4.

According to the policy, a result committee under the principal of the school will be formed in each school comprising of two senior most PGT from the same school and two PGT from the neighbouring schools. The committee has been given liberty to prepare the result by following the policy.

“In case where any candidate is not satisfied with the assessment done, based on the policy, such candidates will be given an opportunity to appear in examinations to be conducted by the Board, when conditions are conducive for holding the examinations. As per this policy, marks scored in the later examination will be considered as final”, said the CBSE’s affidavit.

Elaborating on the criteria for the Class 12 assessment, the CBSE said: “The computation of theory marks for Class 12 will be based on performance in one or more Unit Test(s)/Mid-Term/Pre-Board(s) theory examination. The result committee of the school may decide weightage to be given to each exam based on the credibility and reliability of the assessment. For example, if the committee may be of the considered view that only the Pre-Board exams may be taken into consideration, then full weightage can be given to that component. Similarly, another school result committee may decide to give equal weightage to Pre-Board exams and Mid-Term exams”.

Computation of Class 12 theory marks will be on the basis of the yearend final theory exam in the respective subjects. “Computation of Class 10 theory marks shall be based on average theory marks obtained by the student(s) in best three performing subjects out of the main 5 subjects. This average will be uniformly awarded to all the Class 12 subjects based on theory weightage”, added the affidavit. Most counsel appearing for the students concurred with the CBSE assessment plan.

CISCE counsel J.K. Das informed the Supreme Court that it will take the performance of students in the last six years while awarding the final marks to Class 12 students.

The top court suggested there should be an inbuilt mechanism in the scheme to address grievances of students after the declaration of results. The AG said that he would consult the authorities. The top court said the two boards can go ahead and notify their evaluation schemes after incorporating the suggestions of the court.

The top court said it would hear the matter on June 21 again to find out whether any other suggestion could be placed before the CBSE for consideration.

The Supreme Court also agreed to hear petitions for the cancellation of state board examinations for Class 12 in the states of Assam, Punjab, Tripura and Andhra Pradesh.