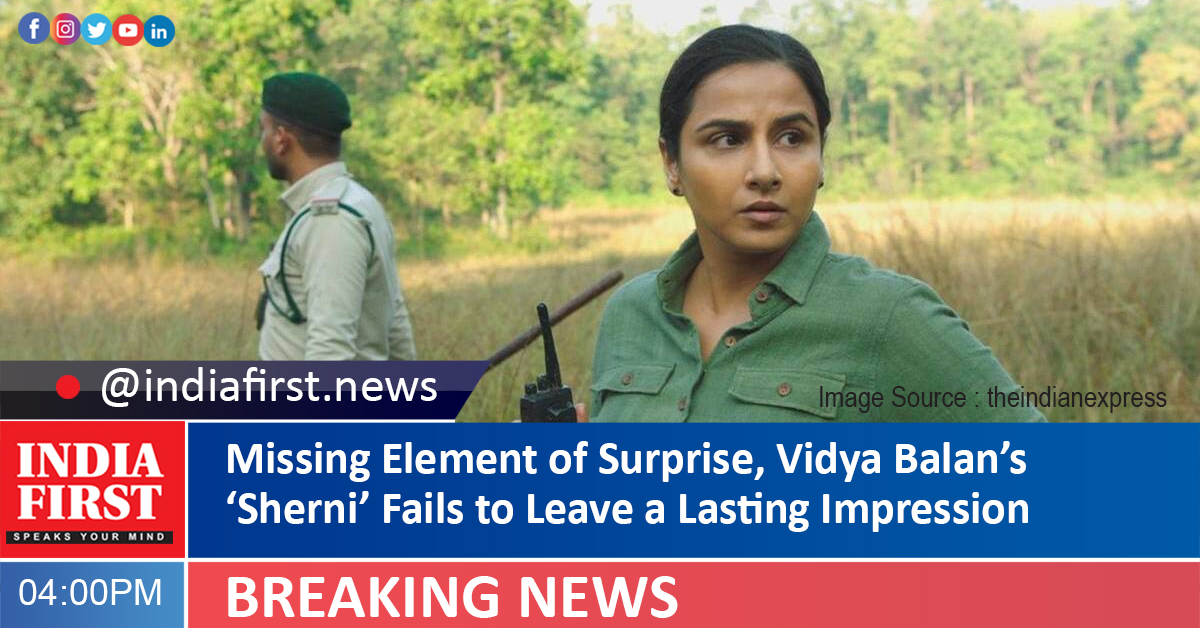 “Sherni” tackles several diverse issues. The film is as much about sexism at the ‘sarkari’ workplaces as it is about the rapid erosion of forest land and the threat to wildlife in the name of development. It is about India’s apathetic ‘babu’ culture as well as the self-seeking rich and mighty who thrive at the expense of nature. There is the political class, forever waiting to turn anything and everything to their advantage. The film allots a fleeting jibe at news television, too, and its incessant fetish for sensationalism.

It is all very well put together with slow-burn impact, as the narrative gradually builds the drama around the story of a tiger hunt. Yet, fascinated as you are watching a world that’s constantly fending against peculiar conflicts, Amit V. Masurkar’s film and its issues come across as vaguely familiar, and push the story towards a climax that hardly leaves a lasting impact.

“Sherni” lacks the element of surprise that made Masurkar’s earlier film “Newton” an outstanding effort.

Although the two films highlight different issues, “Newton” and “Sherni” find a likeness in their heartland India setting as well as the focus on a lackadaisical system that ignores the problems they are meant to address. Masurkar’s storytelling idiom is different this time. If “Newton” drove home its message with biting satire, “Sherni” sees the filmmaker stick to straightforward narration.

At the core of the story is Vidya Balan as Vidya Vincent, a well-intentioned forest officer. We see all that goes in the story on through her eyes, which lets us understand the malaise at the grassroots level from the perspective of the protagonist.

Forest officer Vidya hits the ground running, because no sooner has she joined work, a man is reported to be killed by a tiger. More kills follow and the tension in the area escalates. The villagers are upset as they cannot take their cattle out grazing in the forest. The local political bigwig assures them the tiger will be killed, and his rival wastes no time in inciting the locals over political neglect. Vidya gets the help of a professor named Noorani (Vijay Raaz), who is also a DNA expert and is willing pitch in to identify the killer beast. An amateur hunter from an influential royal clan (Sharat Saxena) on the other hand is keen to shoot down the Tiger.

Vidya herself is juggling between tension at work and a long-distance marriage, what with her husband (Mukul Chadda) in Mumbai. Her immediate senior at work (Brijendra Kala) doesn’t give a damn about the state of affairs, and a former senior (Neeraj Kabi) she meets in the course of the case would rather be of service to the influential class in the area than look for solutions.

The identity of the killer beast is established as a tigress with two cubs. Vidya and Noorani feel the beast needn’t be killed. It could be relocated at the nearby national park. But there are enough people of power with vested interests who would benefit if the tigress died.

Masurkar’s treatment of the plot is strikingly authentic. The cinematography (Rakesh Haridas) and dialogues (Yashaswi Mishra and Masurkar) create a milieu that the film, for most parts, seems like it was documenting real-life footage rather than showing a slice of fiction.

“Sherni” is Masurkar’s third feature release and incidentally the first one he hasn’t written. The script and screenplay by Aastha Tiku, however, bears the stamp of Masurkar’s earlier works – “Sulemani Keeda” and “Newton” – in the way the film never goes over the top even in the most dramatic of scenes.

Vidya Balan spearheads an incredible cast that lives up to its billing. For Vidya, “Sherni” is among her most effortless portrayals. She gets minimum lines and plays out Vidya Vincent with understated ease. The film is not wholly convincing while imagining Vidya as a woman in a position of power caught in a patriarchal set-up. Her bigger challenge than tracking down the killer tigress is obviously dealing with a system that is reluctant to function or let her function. You get the feeling while watching the film that the problem isn’t necessarily related to deep-seated patriarchy. A young male protagonist trying to do his job amidst a system that’s rotting would face the same woes. If the problem magnifies for Vidya Vincent as a woman, the film somehow doesn’t fully succeed in conveying as much.