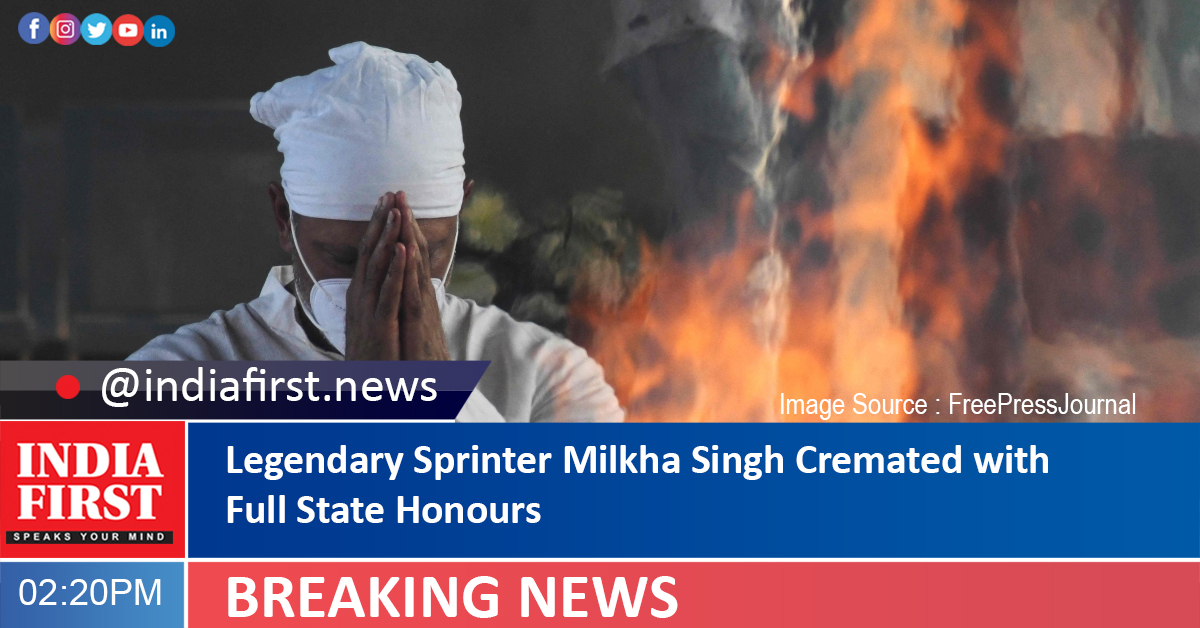 Chandigarh yesterday bid a tearful farewell to ‘Flying Sikh’ Milkha Singh (91), who passed away at the PGI Hospital after a prolonged battle with Covid-19.

Milkha Singh was cremated with full state honours at the Sector 25 cremation ground in the city with a police contingent according gun salute by reversing arms and sounding the last post to the legendary athlete, who held the 400m national record for 38 years, while his Asian record in the same event remained unmatched for 26 years.

Milkha Singh breathed his last late on June 18 night after a long battle with Covid-related complications, just five days after his wife Nirmal Kaur lost her battle against the dreaded virus.

The Chief Minister handed over a photo of the late athlete with Jawaharlal Nehru to Jeev Milkha Singh.

The Punjab government had earlier declared one-day state mourning and a public holiday as a mark of respect to the legendary athlete.

Earlier in the day, Amarinder Singh had announced that the Punjab government would accord a state funeral to Milkha Singh.

The Chief Minister also announced a Milkha Singh Chair at the Maharaja Bhupinder Singh Punjab Sports University in Patiala in memory of the legendary athlete.

Milkha Singh’s death is a mammoth loss to the entire nation and a sad moment for all, he said.

Recalling the declaration of a national holiday by then Prime Minister late Jawaharlal Nehru after Milkha Singh defeated champion Pakistan sprinter Abdul Khaliq in Lahore in 1960, the Chief Minister said he wished he could have also declared a national holiday today.

But Punjab would mourn the legend with a state holiday, with flags flying at half mast, he added.

The 1960 win in Lahore was a momentous occasion for Milkha Singh, who had lost his family in Pakistan at the time of Partition.

It was after that victory that then Pakistan President General Ayub Khan had nicknamed Milkha Singh as ‘Flying Sikh’, said Amarinder Singh while interacting informally with the media outside the athlete’s residence.

Five days back, Milkha Singh’s wife Nirmal Kaur, a former India volleyball captain, had lost her battle against the virus at a private hospital in Mohali.

“In the passing away of Shri Milkha Singh Ji, we have lost a colossal sportsperson, who captured the nation’s imagination and had a special place in the hearts of countless Indians. His inspiring personality endeared himself to millions. Anguished by his passing away,” Modi said in a tweet.

In another tweet, Modi said he had spoken to Milkha Singh just a few days ago.

“Little did I know that it would be our last conversation. Several budding athletes will derive strength from his life journey. My condolences to his family and many admirers all over the world,” the Prime Minister said.

Milkha Singh was admitted to the ICU of the Covid Hospital of PGIMER on June 3, where was treated for Covid till June 13 when he tested negative.

However, due to post-Covid complications, he was shifted from the Covid Hospital to the medical ICU. But despite best of the efforts by the medical team, Milkha Singh could not be retrieved from his critical condition, said Ashok Kumar, official spokesperson for the PGIMER.