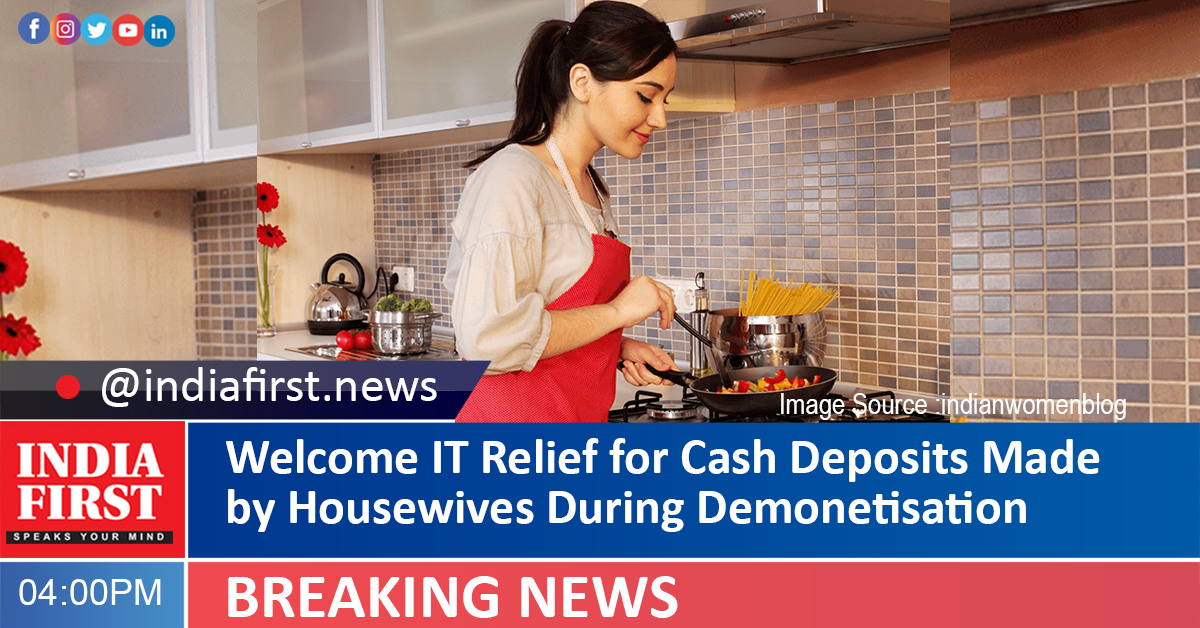 In a significant ruling granting major relief to all the housewives in the country, the Income Tax Appellate Tribunal (ITAT), Agra bench consisting of Judicial Member Lalit Kumar and the Accountant Member Dr Mitha Lal Meena, has ruled that cash deposit made by the housewives during the demonetization scheme 2016, cannot be subject to addition if such deposits are below Rs 2.5 lakh and such amount shall not be treated as income of the assessee, Taxscan reported.

The Tribunal was considering an appeal filed by a housewife, the assessee who deposited the cash of Rs 2,11,500 in the bank account during the demonetization period.

It was the case of the assessee that she had collected/saved the above-said sum from her previous saving, given by her husband, son, relatives for the purposes of her and her family’s future, the report said.

“Women all over the country had been accumulating cash that they had saved for themselves from household budgets, by haggling with vegetable sellers, tailors, grocers, and assorted traders, years of stashing in whatever little cash gifts they received from relatives during festival times and years of tucking away the change they found in the pants that they washed every day, however, suddenly they were left with no option but to deposit the amount in the denomination of Rs 500 and Rs 1000 notes in the banks on account of Demonetisation scheme 2016, these notes were no more legal tenders. Lots of concerns were raised by political and social organizations to bring on fore the plight of women folks, on account of scheme of 2016.”

The report said allowing the appeal considering the facts in deep, the Tribunal observed that the assessee had duly explained the source of deposit i.e previous years saving and we have no hesitation to accept the same, as it would be presumed that this small amount of Rs 2,21,000 would have been accumulated or saved by her from various activities undertaken by her for and on behalf of the family in last many years.

“Further as mentioned herein above, in the decision of Kirti (supra), women per se cannot be said to be not having income from any activities, as they are presumed to always been doing economic activities in the family for many years, hence in our view, the assessee had duly explained the source of her investment. Therefore no additions can be made by a lower authority. Further even if we ignore the explanation, for the sake of argument, then also it is for the assessing officer to bring on record some cogent evidence to prove that the amount deposited in the bank was undisclosed income arising from the business or from any other activities. No evidence has been brought on record by the lower authorities,” the Tribunal said, as per the report.

Elaborating the invaluable contributions of the house-wives towards the growth of the country, the Tribunal said that this decision may be treated as a precedent in respect to proceedings arising out of the cash deposit made by the housewives during the demonetization scheme 2016, only up to the limit of Rs 2.5 lakh, the report said.